If Not Free Trade, Then What? 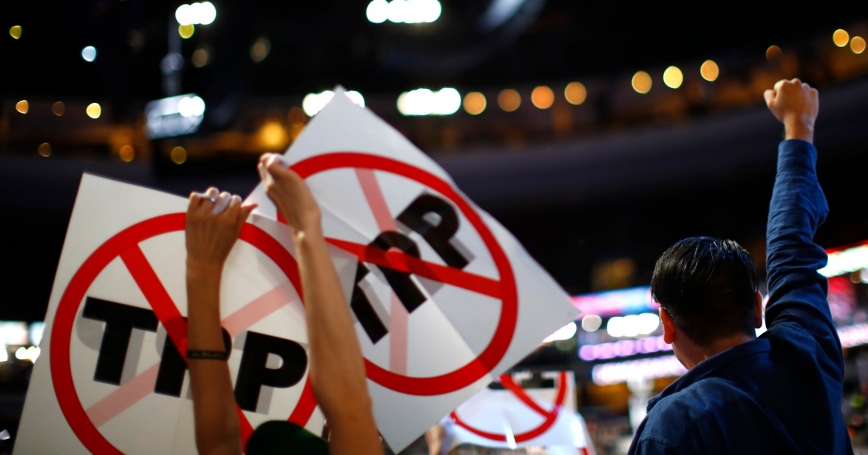 Despite innumerable and sharp disagreements between them, Hillary Clinton and Donald Trump have surprisingly congruent positions on free trade, both suggesting it has adversely affected jobs and wages in the United States.

What this negative focus on trade deals fails to recognize, though, is that the downward pressure on jobs and wages has been mainly due not to the export of jobs abroad but to a decline in the growth rate of U.S. labor productivity.

Before the Great Recession of 2008, labor productivity in non-farm businesses increased 2 to 3 percent a year. Since 2009, labor productivity has stagnated. Slow or negative productivity growth reduces what employers are able to pay employees, exerts a drag on employment, and reduces the ability of domestic producers to compete with foreign producers.

The opponents of free trade have newly rediscovered “fair trade”—something that, although not clearly defined by the candidates, is implied by them and their campaigns and is presumed to be reconcilable with protecting U.S. jobs and wages.

So, what is fair trade?

The concept's modern history starts with the 1933 National Industrial Recovery Act (NRA), which sought to counter the Great Depression's deep deflation by raising producers' prices and linking those increases to higher pay for workers. NRA was mainly concerned with domestic transactions, but was also intended to apply to foreign trade.

The fair trade concept has since been invoked to shore up the price of products (both raw materials and manufactures) coming from emerging markets. The idea has been to assist those countries' economic development—with the side benefit of keeping such products from undercutting the price of domestic goods.

A third strand of fair trade calls for debate and transparency in setting quotas, tariffs, and nontariff barriers in trade agreements. This strand is concerned with how agreements on trade restrictions are reached, rather than the agreements' content.

Most recently, fair trade has entailed attention to the environmental consequences of growing trade, with the goal of avoiding or at least limiting the adverse effects trade may have on climate and pollution.

The bottom line of all the strands is that none of them has been successful from the standpoint of those most affected by them. Where fair trade has contributed to higher market prices, beneficiaries considered the benefits to be insufficient, while those paying higher prices regarded the costs as excessive; and where fair trade led to lower prices, buyers considered the reductions to be insufficient, while producers viewed the reductions as excessive.

“Fair trade” has never had clear, quantifiable standards for judging what's fair. I would propose the following criterion, what I call the “Market-Access, Most-Favored-Nation Criterion of Fairness”—that is, assured access by U.S. businesses to markets in partner countries equivalent to access that businesses from partner countries have in U.S. markets.

TPP contains much that is complicated, unresolved, and obscure. It's more about 'how' than 'what.'

How would this criterion work if applied to the pending and uncertain future of TPP? Let's start by summarizing the draft TPP signed by the 12 signatories in February 2016. The text of TPP consists of a brief introduction plus two chapters—a dozen-page statement of general principles about transparency and dialogue as essential for arriving at trade agreements in general and for TPP in particular. The document then contains a series of annexes, notes, and commentaries by each of the 12 signatories in which they specify the exceptions, omissions, and postponements that the signatories anticipate in their efforts to implement the general principles enunciated in the opening chapters. The extensive addenda of unresolved issues amounts to more than 150 pages. Among the specific areas cited by the United States as unresolved are pharmaceuticals, dairy products, and intellectual property rights. All of the 11 other signatories cite many other issues—products, services, scheduling—that they consider to be unresolved.

So, TPP contains much that is complicated, unresolved, and obscure. It is an agreement that is more about how than about what. I would hope and expect that invoking the market-access criterion could help to advance resolution of “what.”

Finally, let's return to the U.S. presidential election—in particular, how the candidates might react to this interpretation of fairness. As things stand, with hyper-charged invective and animosity pervading the campaign, neither Clinton nor Trump would likely have the remotest interest in considering the matter, despite their prior agreement on the subject. But come November 9, that may change. It may not be unrealistically hopeful to anticipate a willingness to define and implement a concept of “fair trade” that is not antitrade.

Charles Wolf Jr., the distinguished chair in international economics at the nonpartisan, nonprofit RAND Corporation and a senior research fellow at the Hoover Institution, died on October 24, 2016.

This commentary originally appeared on The Weekly Standard on November 4, 2016. Commentary gives RAND researchers a platform to convey insights based on their professional expertise and often on their peer-reviewed research and analysis.