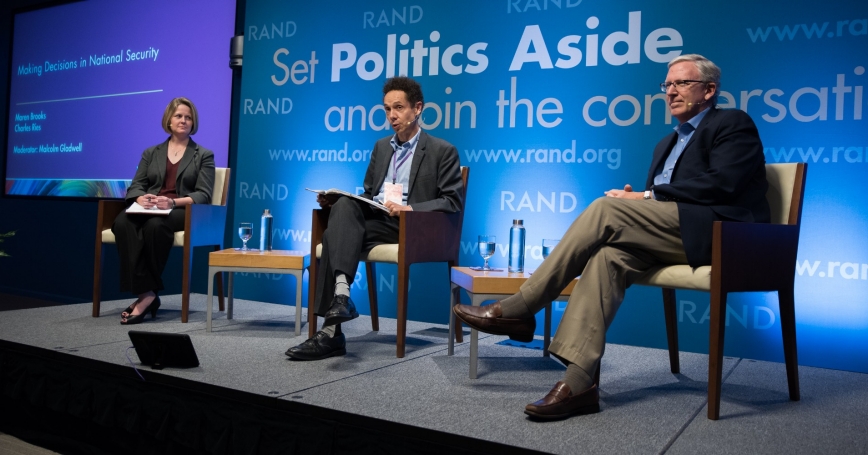 In a crisis, there's a tendency in government to add more people to address the problem, but doing so often slows decision-making.

Gladwell cited Fred Brooks' 1975 book, “The Mythical Man-Month” and “Brooks' Law,” which says that adding manpower to a late software project makes it even later. People often believe they can speed up a project by adding additional bodies to a task, but tasks are not perfectly divisible. Adding more people increases communication costs; coordinating and sharing information takes time.

“It would be easier to make policy on the things that matter if you have fewer people,” Ries said. “The more people you have, the more they generate meetings, because they have to justify their existence.”

Brooks said the size of the NSC has tended to ebb and flow over time. When Condoleezza Rice was the National Security Advisor, she thought the NSC was too large and planned to reduce it, only to see it grow by 50 percent by the time she left, in part because of the terrorist attacks of 9/11.

Ries said the tendency to expand agencies after a crisis happens because it's often easier to invent something new rather than require the agency to fix problems in the existing structure. He said he was also bothered by the proliferation of newly created “czars” outside of the agency structures to deal with emerging problems. The problem occurs when a czar goes to deal with a foreign counterpart and finds there isn't one.

“We don't make policy and decide what to do in a vacuum; we're dealing with other governments,” Ries said. “If we can think about things the way our allies, partners and adversaries do, we'll be better placed to adopt strategies that can succeed.”

Brooks said an alternative solution for an emerging crisis—for example, Ebola—would be to bring in 15 people to solve the problem on more of a task-force level, in a time-defined surge capacity rather than creating a permanent czar.