Pulling Up the Drawbridge 'Is Fundamentally Flawed' 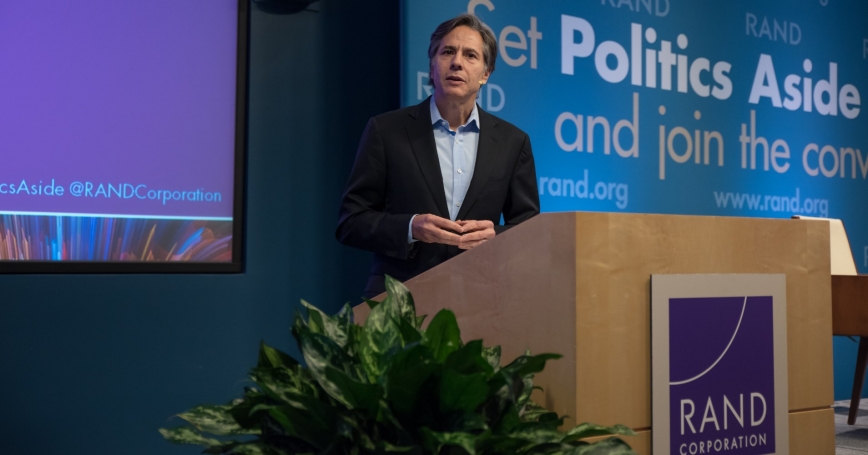 The current polarization evident in the United States is a reaction to the rapid pace of global change, between those who want to harness it and build bridges, and those who want to erect walls, Antony Blinken said Saturday at RAND.

Global change has produced many benefits, including lifting billions of people out of poverty, spreading democracy, creating stability and international order, Blinken said. “When you step back and look at the big picture, people are healthier, wealthier, better educated and more tolerant than any other time in human history,” he said.

But while the benefits of globalization are undeniable, a significant portion of the U.S. population has experienced the downsides, leaving them to question the merits of being open to the world, he said.

“They worry that refugees pose a threat to their physical safety, immigrants to our identity; that free-trade agreements are benefiting everyone except for them, that policies and investments are being made without them in mind,” Blinken said. “They've seen real wages stagnate and factory jobs disappear. What value can there be in a system that they feel has left them out and left them behind?”

“But this argument that we're better off pulling up the drawbridge is both totally understandable, and I continue to believe, fundamentally flawed,” Blinken said. “It underestimates the risks of turning inward while overstating the costs and downplaying the benefits of facing outward.”

New technology has made information more abundant but also has fueled greater polarization and amplified a sense of chaos and confusion. In the 1990s, people got their news from the evening news or a respected newspaper—operating from a shared fact base. Today people obtain their news from multiple, often inaccurate sources that can crowd out other perspectives, he said.

People who believe in an open society have a lot of work to do, Blinken said. Although the government and policymakers cannot do it alone, people have to do a better job of listening to and responding to the needs of all citizens.

“It's not truly progress,” Blinken said, “if too many of our fellow citizens are left out or feel left out.”