Social Media's Role in the Erosion of Truth 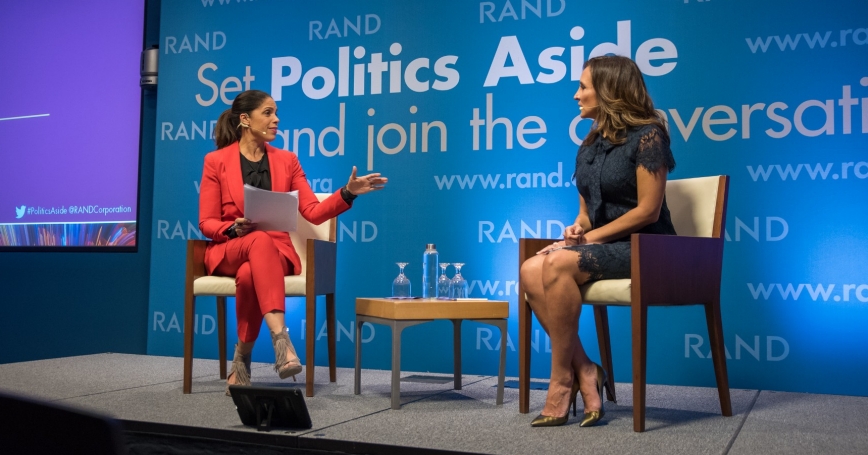 Social media and the changing way Americans are consuming information is amplifying the erosion of truth in society, journalists Soledad O'Brien and Leslie Sanchez said Friday night at RAND's Politics Aside event.

The “firehose” of available information on such social media platforms as Snapchat and Twitter makes it difficult for people to distinguish between sources that are credible and those that aren't. “If people can't pick out what's true and false, that's hugely problematic,” O'Brien said.

On social media, stories—both true and false—spread quickly and the source of the information is not always obvious. As a story is passed from one person to the next, people give more validity to what they hear and read because it has been shared by their peers. And once their opinion has been established, people often pick news sources that match their views, instead of challenging them, the journalists said.

To combat this, they said the media has to adapt to a rapidly moving news cycle that breaks information down into tweets that are consumed in two to four seconds. In addition, news consumption is increasingly visual, with more than 70 percent of millennials sharing information via Snapchat.

“You have to figure out how to get the biggest number of clicks, on as many platforms as possible, with good data and information,” O'Brien said. “You have to slice and dice it to serve every constituency.”

Since millennials consume much of their information via their cellphones, news targeting them should be condensed into a 90-second story that can ideally be consumed while they are walking, O'Brien and Sanchez said.

“How do we reinsert facts into a conversation when you have a firehose of stuff aimed at you every day?” O'Brien asked. “The only real solution can be connecting storytelling to some kind of emotional narrative. People believe you when they are emotionally moved by your story.”

Serving up facts alone, they said, is no longer enough.