The Art of Data in Baseball 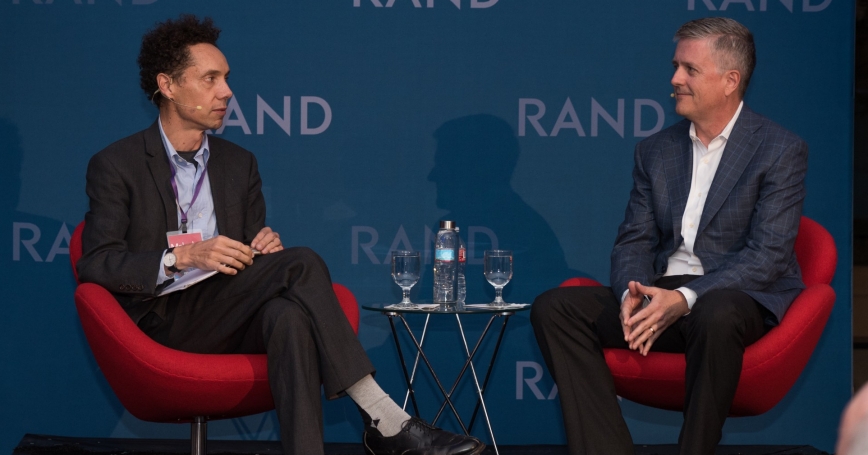 In the 13 years since Michael Lewis' book Moneyball showed how data and analytics could help the lowly Oakland A's compete against big-market teams, the approach has all but taken over baseball.

Jeff Luhnow joined the revolution early. Soon after Moneyball came out, the St. Louis Cardinals hired him to lead their analytics charge. Luhnow had a McKinsey & Co. consulting pedigree and was dubbed “the accountant.”

“When I started at the Cards we hired one analyst and thought a second would only be needed briefly,” Luhnow told New Yorker journalist Malcolm Gladwell on stage at the RAND Corporation's Politics Aside event.

But the Cardinals hung on to that second analyst—and eventually added more. Today every major league team has at least six analysts, on average.

Analytics recently kept Luhnow's current team, the Houston Astros, where he is general manager, from shelling out a big bonus to a Cuban prospect. “A year ago we would have signed him,” he said. But technology revealed a problem with the player's swing that would have been a major undertaking to correct.

But surely, Gladwell asked, aren't there limits to the predictive powers of analytics?

Luhnow said yes. Sleep studies suggested his players would be better off if they stayed the night at an away game instead of flying home and sleeping late the next day. But when they tried it, the reality was players didn't actually go to bed when they were supposed to.

He also mentioned Jose Altuve, the diminutive Astros second baseman. “The guide says he's 5-foot-6, but he's 5-foot-5,” Luhnow said, drawing laughter. “When he came for tryouts they shooed him away.”

But neither the scouts nor the analytics accounted for Altuve's now-legendary work ethic—routinely arriving at practice an hour before everyone else—that made him a multiple All-Star. “We would have predicted him to get to the bigs but not do so well,” Luhnow said. “He's exceeded our predictions year after year.”

Luhnow's takeaway: Teams do best when analytics match up with traditional evaluation.

Now analytics is just as crucial in other sports. In basketball, it advises when to shoot the 3-point shot. In football, when to punt. In soccer, seeing whether distances run matches up with passing efficiency.

“We just hired a guy from the soccer industry” to help assess fatigue and other health issues, Luhnow said. “He's given us a huge head start in that area. Some guys are going sport to sport. There's going to be more cross-pollination.”