The Islamic State-Taliban Rivalry in Afghanistan 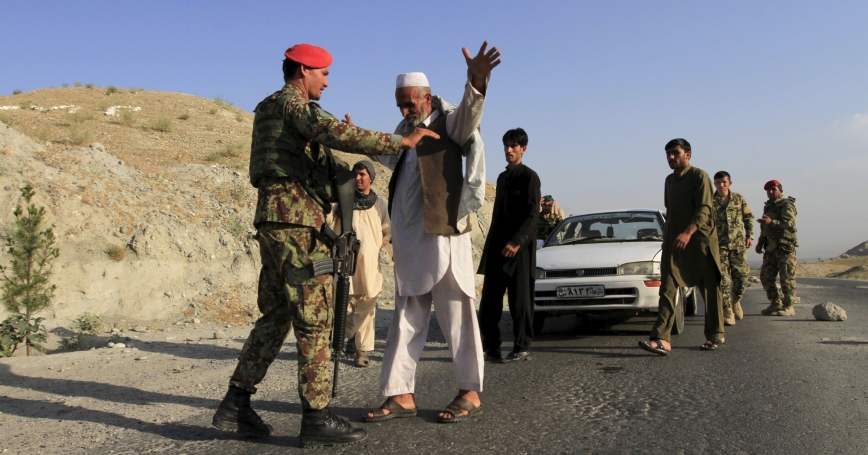 Afghan National Army soldiers inspect passengers at a checkpoint in eastern Afghanistan, June 29, 2015, after Islamic State fighters had seized territory in Afghanistan from rival Taliban insurgents for the first time

Since 2014, the Islamic State has established a small presence in Afghanistan. Islamic State leaders call this province, or wilayat, “Khorasan,” a reference to the historical region that encompassed parts of Iran, Central Asia, Afghanistan, and Pakistan. Yet despite their effort to expand power and influence in the region, the Islamic State-Khorasan Province, as Islamic State leaders refer to the affiliate, controls virtually no territory except for tiny areas in such districts as Deh Bala, Achin, and Naziyan in the eastern province of Nangarhar. The Islamic State has conducted only a handful of attacks in the region, failed to secure the support of most locals, and struggled with poor leadership.

The Afghan Taliban has emerged as one of the Islamic State's fiercest enemies, though the U.S. and Afghan governments have conducted strikes as well. Taliban commanders have orchestrated an aggressive campaign against the Islamic State to kill its senior leaders, co-opt its members, and undermine its ideology. This development is a double-edged sword for the United States, with broader implications in the campaign to unseat the Islamic State from territorial control in the Middle East, Africa, and Asia. The weakening of the Islamic State is a positive step. But Taliban successes against Abu Bakr al-Baghdadi's organization have increased the Taliban's strength in eastern and southern Afghanistan, creating a separate challenge for the United States and its allies.

The Rise of the Islamic State in Khorasan

In 2014, Islamic State leaders communicated with militant groups in South Asia to gauge the possibility of expanding the Islamic State's influence in the region. The Islamic State began conducting an information campaign through word of mouth, printed material, and other forums. Islamic State sympathizers, for example, distributed a 12-page printed booklet titled “Fateh” (or “victory” in Pashto) in Pashtun areas of Afghanistan and Pakistan. As Tehreek-e-Taliban Pakistan spokesman Shahid Shahidullah remarked in late 2014: “Oh our brothers, we are proud of you in your victories. We are with you in your happiness and your sorrow … All Muslims in the world have great expectations of you. We are with you, we will provide you with mujahedeen and with every possible support.”

The remainder of this commentary is available on lawfareblog.com

Seth G. Jones is director of the International Security and Defense Policy Center at RAND and an adjunct professor at Johns Hopkins University's School for Advanced International Studies (SAIS). He is author, most recently, of “Waging Insurgent Warfare” (Oxford University Press).

This commentary originally appeared on Lawfare on November 27, 2016. Commentary gives RAND researchers a platform to convey insights based on their professional expertise and often on their peer-reviewed research and analysis.