The Price of Personalized Health Care 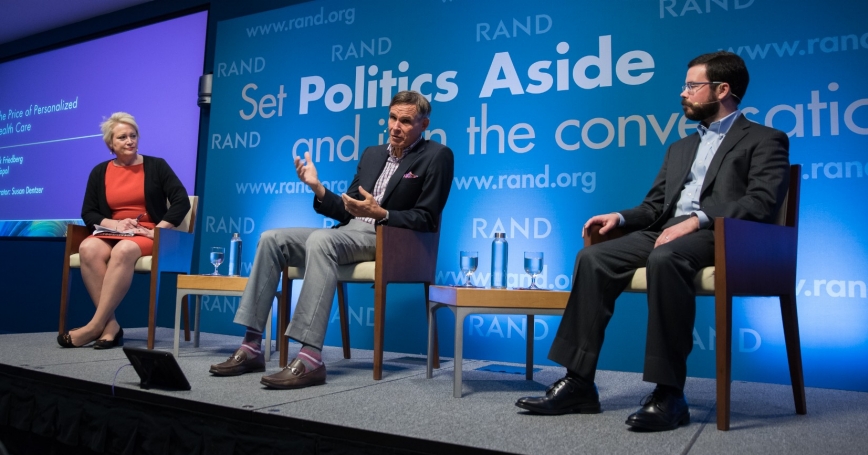 Medical care in the United States is entering an era where technology can give patients more control over their care, free them from having to visit a doctor for every ailment and allow them to claim control over their medical records, according to experts who spoke Saturday during the RAND Corporation's Politics Aside event in Santa Monica.

“The smartphone is at the center of a new era of medicine” and can now be used to complete tests such as an echocardiogram at home and allow people to take a sleep study in their own bed instead of in a hospital, said Dr. Eric Topol, a cardiologist who serves as director of the Scripps Translational Science Institute.

The ultimate result of this technical boon will be to allow patients to diagnose some ailments at home before they decide to visit health care providers to seek treatment, said Topol, author of the books “The Patient Will See You Now: The Future of Medicine is in Your Hands” and “The Creative Destruction of Medicine: How the Digital Revolution Will Create Better Health Care.”

“It's a very exciting time. It's not for everyone. But it's for those who want to use the new technology” to push back on the paternalistic view of medical providers and shift the balance of control in health care to the patient, he said.

Panelist Dr. Mark Friedberg, a physician scientist at RAND, agreed that technology has the promise to improve many parts of medical care but tempered some of Topol's enthusiasm. Friedberg cautioned that the tools being developed need to be carefully validated before they are put into use.

He said medical groups have cautioned against the possibility of “digital snake oil” and highlighted the case of Theranos, a Silicon Valley startup that promised to revolutionize how blood is analyzed until it was shown that its breakthrough methods did not work well.

Friedberg also noted the mixed results thus far in the use of electronic medical records, which promise to improve recordkeeping and help reduce unnecessary care by digitizing patient information. Both physicians and patients have complained that the records can disrupt a visit to the doctor as physicians spend exam time typing information into a computer instead of interacting with the patient. Some have described the distraction as being akin to texting while driving a car, Friedberg said.

Panel moderator Susan Dentzer, a health policy expert and director of the Network for Excellence in Health Innovation, highlighted the role that cognitive computing could assume in helping to diagnose illnesses and prescribe treatment plans. Such computer-based systems have already shown competence in reading medical imaging and diagnosing cancer from biopsies.

The discussion was part of RAND's Politics Aside, a two-day gathering that brings experts, policymakers and others together for a nonpartisan discussion about the top policy issues for 2017 and beyond.