The Return of a Cold War Threat 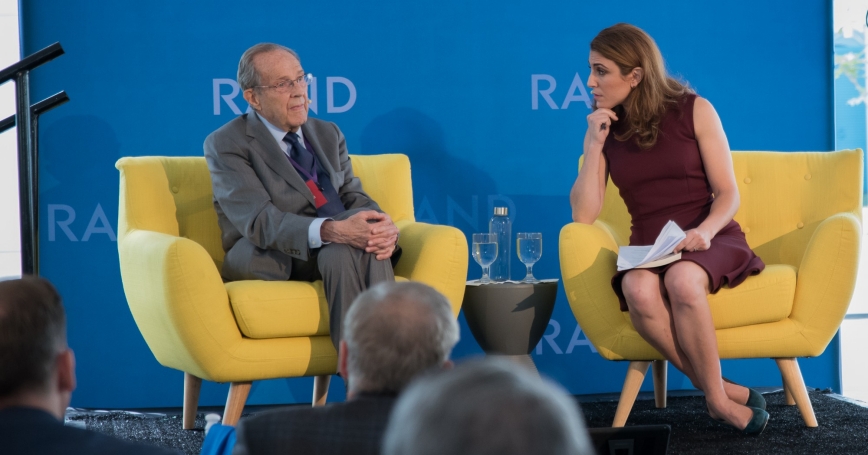 The danger of blundering into a nuclear war through miscalculation or human error—a threat the U.S. faced during the Cold War—has returned, former Secretary of Defense William J. Perry said Saturday at the RAND Corporation in Santa Monica.

Expounding on the theme of his 2015 book, “My Journey at the Nuclear Brink,” Perry said no leader in the United States, Russia, or China is seeking nuclear war, but pointed out that there are new dangers that didn't exist during the Cold War that could lead to nuclear war. They include a potential for nuclear terrorism and regional nuclear warfare.

“We're in the early stages of the second nuclear arms race in my lifetime,” Perry said during Politics Aside, a post-election event that brings together policymakers, philanthropists, and RAND experts for a nonpartisan examination of pressing policy challenges. He spoke with Gayle Tzemach Lemmon, a senior fellow at the Council on Foreign Relations, about the modern nuclear era and the need to educate the public about its dangers.

When the Cold War ended, the United States had a unique opportunity to build relations with Russia and other Eastern European countries, Perry said, but instead the United States and Russia went down a “slippery path” and must share the blame for doing so. He gave four reasons for the deteriorating relationship and said two were caused by U.S. actions—the decision at the end of President Clinton's first term to expand NATO into Eastern Europe and a more recent decision to deploy an anti-ballistic missile system in Eastern Europe. Russia made matters worse through its aggression in Georgia and again in the Ukraine, he said.

Regarding last year's nuclear deal with Iran, Perry said that it was “probably the best deal we could have gotten.” Sanctions from almost every country in the world brought Iran to the negotiating table, he said, and it's a “fantasy” to think that the United States has any prospect of being able to renegotiate the deal. “It's a deal worth having when you consider the alternatives,” Perry said.