To Increase Diversity in Tech, We Need to Rethink What 'Tech' Is 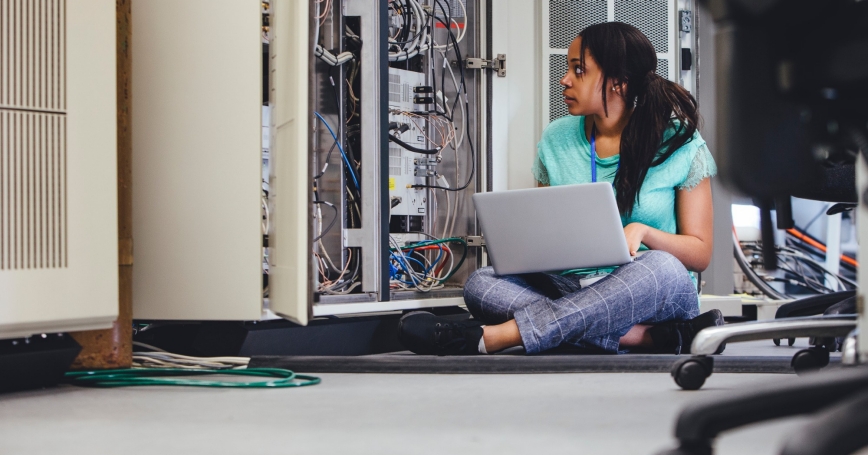 It's no secret that the tech sector is a driving force for high-skill, high-wage job creation in the United States.

Yet news stories are full of claims that these jobs provide unequal benefits—too few women and minorities reap the gains. Rethinking what defines today's tech jobs, along with greater investment in public-private partnerships, could go a long way toward bridging the diversity gap.

The current narrative surrounding tech jobs is not particularly flattering. There is a perception that tech benefits only a privileged few, offering little opportunity for the many.

Congress has also taken an interest in the matter, holding frequent hearings and policy roundtables on the subject. Major tech companies like Google and Facebook perhaps unwittingly reinforce this narrative, reporting a stark lack of diversity in their tech workforce.

Tech jobs as typically reported in mainstream news are narrowly defined as computer science engineering occupations found only in Silicon Valley. Little room is left for interpretation—when someone refers to a “tech” job, an app developer or hardware engineer likely comes to mind, holed up in a shared workspace or corporate campus somewhere in the Bay Area.

It has been a well-documented fact that relatively few of these tech jobs are filled by women, African-Americans or Hispanics.

Yet this pervasive view provides an incomplete picture of tech jobs today.

In reality, tech jobs can be found across the United States in virtually every industry. New York, Denver, Austin and “Silicon Beach” in Los Angeles are just a few tech clusters enjoying rapid growth, with jobs spanning industries such as finance, energy, healthcare and marketing.

Jobs once thought of as being outside of tech—installation and repair, human resources, project management, sales and advertising—increasingly heavily rely on tech-driven skills.

Taking a broader view enables a more comprehensive strategy that could foster awareness and diversity, capture various skill levels and include tech employers across all pertinent industries.

Some strategies are already in place to make tech more diverse and inclusive. Initiatives like the White House's TechHire, launched in 2015 to target and train young people for tech jobs, have trained thousands for careers in tech, healthcare and advanced manufacturing.

Boot camps for coding are gaining traction across the country, as are corporate-sponsored “hackathons” and app design contests.

These efforts are a promising start, but they are only a beginning. Behind the absence of tech diversity is a larger issue: a higher education system that emphasizes academic degrees over technical and vocational skills.

There is a mismatch between the needs of employers, the skills provided by educational institutions, and the incentives for these institutions to adapt accordingly. As the pace of technological innovation and adoption rapidly increases, the imbalance will likely worsen.

One oft-touted solution—more four-year college degrees—is not necessarily the answer to promoting diversity in tech jobs.

Tech jobs come in many shapes and sizes, enabling alternative pathways into the workforce. That should be embraced.

If policymakers want to expand opportunities, they could consider taking a different approach to tech-related education and training with public-private partnerships as the cornerstone. Such partnerships could come in many forms and include providing schools with technology, offering externships and directly providing training or scholarships.

Community colleges, in particular, could play a critical role. As part of the current movement to provide enhanced student advising services, they could work with local employers to create more employer-student mentorships and apprenticeships.

Such individualized attention could help keep students motivated to stay in school, and even increase notoriously low community college completion rates. Through restructuring current workforce grants and other financial aid programs, states and the federal government could provide incentives for schools to shift their resource allocation and academic priorities in this direction.

States could also reward schools, particularly elementary and middle schools, for working with tech employers to promote early access and awareness to tech careers. High schools could also be compensated for developing career counseling programs that emphasize the potential value of technical and vocational job training.

Finally, employers also can develop training pipelines for entry-level employees independent of any relationship with the government.

In fact, programs like this already exist for management training purposes. For example, Lord & Taylor has an executive-trainee program, Enterprise a management-training program and AT&T a leadership program. It would not be much of a leap to create similar tech-training programs that could give employees an avenue to necessary skills that would be hard to obtain otherwise.

If such programs were developed along with public-private partnerships, more workers could benefit from the tech jobs boom.

Diana Gehlhaus Carew is an assistant policy analyst at the nonprofit, nonpartisan RAND Corporation and a doctoral candidate at the Pardee RAND Graduate School. She is also a senior fellow at the Progressive Policy Institute.

This commentary originally appeared on The Hill on November 17, 2016. Commentary gives RAND researchers a platform to convey insights based on their professional expertise and often on their peer-reviewed research and analysis.