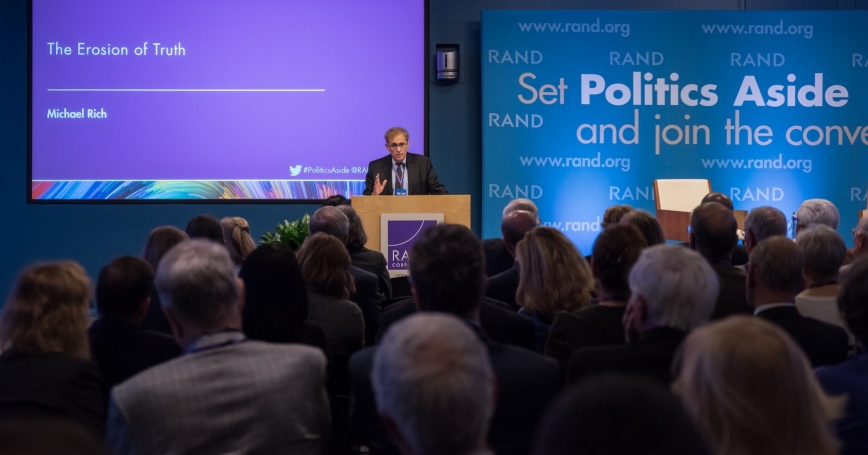 A decade ago, “truthiness” and fact-checker ratings like “Four Pinocchios” and “Pants on Fire” weren't part of the political vernacular. Disagreements over policy have always existed—but disagreements over basic facts have not.

It's a phenomenon that RAND CEO Michael Rich calls “Truth Decay.” And it's been on his mind since long before the election results brought the topic into sharp relief, he told the audience Friday night as part of a Politics Aside discussion called Erosion of Truth.

“This is to me really a dangerous and unusual time in history. Because Americans not only feel entitled to their opinions—and rightly so—but many of them, a growing number of them, frankly, across the political spectrum also feel entitled to cherry pick facts to support their opinion, or even commission up new 'facts' if necessary,” Rich said. “…When everyone has their own facts, then nobody really has any facts at all.”

Truth decay is a threat to a research organization like RAND, whose very existence is based on facts and objectivity, he said, but more importantly it's a threat to society. It pushes political polarization to even greater extremes and prevents policymakers from reaching consensus on solutions to the nation's biggest challenges.

“Polarization inflamed by Truth Decay is the gravest threat facing America,” Rich said. “And that's because virtually no important problem can be solved, virtually no bold initiative can be completed, in the span of a single two-year Congress or even a four-year presidential administration.”

Rich recalled how nearly 30 years ago the U.S. Senate was debating the international treaty that phased out chlorofluorocarbons—organic compounds used as aerosol propellants, refrigerants, and solvents—that researchers said were depleting the ozone layer. Similar to today's battles over climate change, some policymakers were skeptical, and scientists acknowledged they couldn't prove that human activity was to blame for the deteriorating ozone layer.

RAND analysis, relying on the best available evidence, helped break the stalemate by framing the issue in a new way—based on probabilities, not certainty—and the Senate ratified the treaty. Unanimously. “How many of us can imagine our elected leaders in Washington doing the same today on any important issue?” Rich asked.

Spirited public debate is part of the political process, Rich concluded, but policymaking itself must be rooted in rigorous research and analysis of the facts.