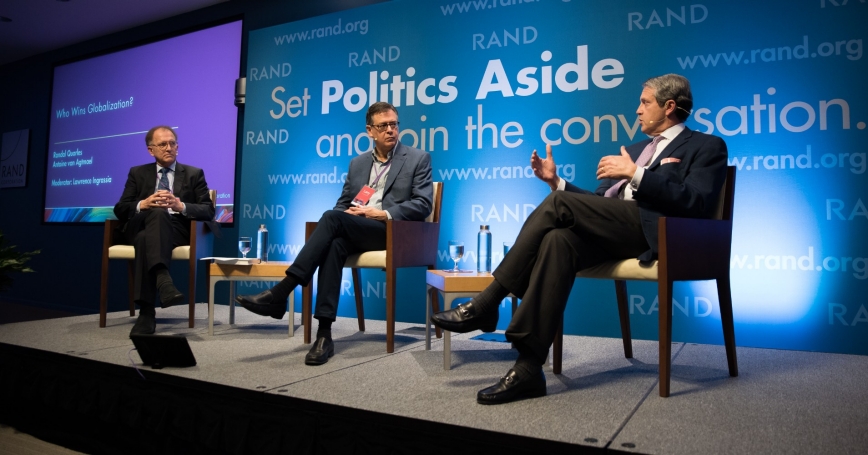 While globalization may be blamed for driving many manufacturing jobs from the United States, technological advances that trimmed the number of workers required to produce goods is another larger culprit, economic experts told an audience Saturday during the RAND Corporation's Politics Aside event in Santa Monica.

The United States' overall share of manufacturing in the world has remained steady at about 20 percent for decades, even while the overall number of manufacturing jobs in the nation has declined, they said.

“These job losses are reflective of the fact that manufacturing requires fewer people, whether they are Chinese people or American people,” said panelist Randal Quarles, former undersecretary of the U.S. Department of the Treasury and now managing director of the private investment firm The Cynosure Group.

While more needs to be done for those who once worked in industries such as furniture manufacturing, where essentially all activity has moved to lower-cost nations, experts said the United States is beginning to see an increase in manufacturing activity because of new types of technological advances.

Your father's manufacturing is not going to come back.

“We are actually at the cusp of a whole new wave of homemade manufacturing again made possible by ... not making things as cheap as possible, but making things as smart as possible,” said Antoine van Agtmael, co-author of the book “The Smartest Places on Earth: Why Rustbelts are the Emerging Hotspots of Global Innovation.”

However, “your father's manufacturing is not going to come back,” he said.

What the United States needs to do is combine what it is good at—information technology and new materials—to create a new type of manufacturing sector, said van Agtmael, who is a senior adviser at the international consulting firm Garten Rothkopf. Regions of the United States where manufacturing jobs have been lost should look to their universities to help create these new industries, he said.

He cited the Akron, Ohio, area as a success story. During the 1970s and 1980s, the region lost four major tire manufacturing plants. But it is now home to more than 1,000 start-up companies in the materials sciences field that provide more high-quality jobs than the tire factories ever did. Such transformations are a result of local government, business leaders and universities working together.

“That is the kind of thing we should embrace,” van Agtmael said. “This should happen from the bottom up” and the federal government “should be an enabler, not a decider.”

The panel was moderated by Larry Ingrassia, a managing editor of the Los Angeles Times. RAND's Politics Aside is a two-day gathering that brings experts, policymakers and others together for a nonpartisan discussion about the top policy issues for 2017 and beyond.