Cracks in the Chinese Powerhouse 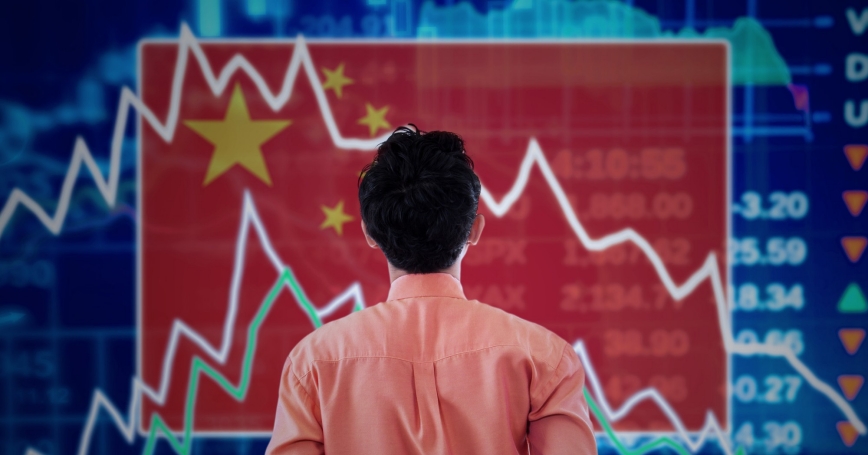 The surprising strength of populist, anti-globalization leaders in the industrial West has underscored the declining prospects for the middle and working classes in the United States and Europe. By contrast, Asian elites and middle class workers are widely regarded as the largest beneficiaries of economic globalization. Despite enviable growth rates, however, Asian economies have their own worries. China's economy has manifested troubling signs in the form of two major, inter-related threats.

First, mounting public and private debt has raised the risk of a financial crisis and of dramatically slower growth rates. Chinese debt has accumulated a dizzying 465 percent over the past decade, and totaled nearly 250 percent of GDP in 2015. Servicing the debt will consume a growing part of the country's resources and is already exacerbating financial volatility (PDF). Worried about the size and pace of credit expansion, the IMF has called the resolution of Chinese debt an urgent (PDF) task.

Second, the country's adherence to an increasingly inefficient mode of economic growth threatens long-term growth. China powered its phenomenal rise on the backs of exports and investment. But this approach has grown less effective as world demand has fallen and capacity grown redundant. More debt is now required to generate less and less growth. According to economist Ruchir Sharma, China now borrows six dollars to generate one dollar in GDP growth.

To correct these problems, China should consider ways to wean the economy from its dependence on cheap credit, exports and infrastructure investment and instead adopt a more balanced and sustainable mode of growth driven to a much larger degree by consumption and services. To carry this out, China needs to curb credit to non-productive state-owned enterprises, expand social welfare service spending, and strengthen market institutions. Chinese authorities acknowledge the risk and have announced a variety of reforms to address the problem. Much of the highly publicized “Third Plenum (PDF)” agenda has centered on establishing the institutions, practices, and policies needed for such an economic transformation. However, implementation of the new policies has been extremely slow and the results largely disappointing. Accordingly, the government has frequently relapsed to loose credit as a way to boost growth and keep unemployment rates low. But these stop-gap measures only delay and compound the long-term structural problems. Indeed, pessimism about China's ability to ever carry out needed reform has grown in recent years.

Serious troubles in the Chinese economy would likely cause the world's tenuous growth to falter.

The mounting weaknesses in China's economy come at an inauspicious time. Depressed global demand has left Beijing few options for overseas markets that could ease the pain of its economic transformation. Indeed, China until recently served as one of the bright spots in a slow growing global economy. The country currently accounts for 18 percent of world GDP, adjusting for purchasing power parity. Serious troubles in the Chinese economy would likely cause the world's tenuous growth to falter. Uncontrolled credit expansion and failure to carry out needed structural reforms will further the misallocation of funds to wasteful purposes, requiring ever larger amounts of debt to fund ever slowing rates of growth. The increasing financial volatility could also spur capital flight, as anxious investors move their savings to more secure and stable markets. Both the developing and developed world would feel the effects. In the developing world, resource-producing countries that depend heavily on exports to China would find growth severely curtailed. Indeed, this has already begun to happen in light of slowing demand from China. Especially exposed are Latin America, Africa, and resource-exporting countries like Australia (PDF). The developed world could see a decline in investment if China opted to enact controls to prevent capital flight. Countries with integrated supply chains, such as Japan, and exporters of higher-end machinery and capital goods, like Germany, would suffer as well from a Chinese slowdown.

Although it remains to be seen what policies he may pursue, the election of Donald Trump as U.S. president could exacerbate China's situation. Trump's election is illustrative of the spreading disenchantment with economic globalization in the industrial West. With Britain's looming exit from the European Union and nationalist European parties poised to make larger electoral gains, the trend shows little sign of abatement. China's continued dependence on exports to these countries renders the country highly vulnerable to the types of protectionist policies advocated by President-elect Trump and other nationalist European leaders. Whether President-elect Trump chooses to pursue tariffs once in office is unclear. But if he chooses to do so, China could retaliate with its own tariffs. The result could be a global trade war that damages growth for all. According to some experts, tariffs enacted against China and Mexico could permanently lower U.S. annual GDP by $100 billion a year and could cost China 5 percent of its GDP. Grimly, the International Monetary Fund (IMF) forecasts continued stagnation in advanced economies, which it warned could increase the appeal of anti-trade policies.

Like most other countries that have experienced rapid development, China is struggling to transition from a highly successful but unsustainable economic model. Such a transformation is difficult to carry out in even the best of economic climates, but Beijing faces the additional challenge of executing difficult reforms in the face of an increasingly inhospitable global economy. To avoid global stagnation, the world's leading economies require even closer coordination and innovative policies to spur global demand. Whether global leaders can resist the growing call for retrenchment and enact policies that invigorate growth remains to be seen.

This commentary originally appeared on The Cipher Brief on December 18, 2016. Commentary gives RAND researchers a platform to convey insights based on their professional expertise and often on their peer-reviewed research and analysis.