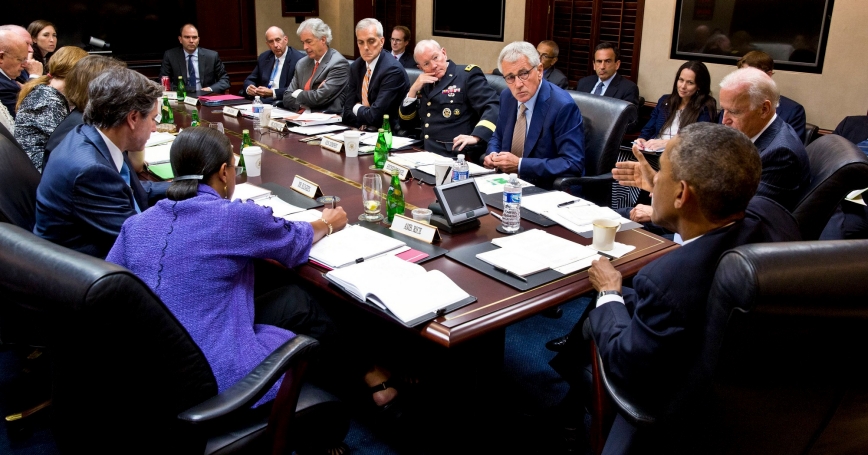 President Barack Obama meets with members of the National Security Council in the Situation Room of the White House, September 10, 2014

With the presidential transition underway and retired Lieutenant General Michael Flynn named National Security Advisor, a critical next step will be formation of the National Security Council (NSC). If precedent holds, the NSC will be defined in the first presidential directive that President Trump will sign in the early weeks of his administration.

Normally, form follows function in the design of organizations, but in some respects, the opposite is true for the NSC. The NSC structure and processes will likely be defined, in some cases before some key officials are confirmed, and certainly before the president's priorities are codified through additional directives and strategy documents.

This early directive will begin to define the NSC and national security policy formulation mechanisms for the Trump presidency. Several important questions should be considered.

Which organizations will be represented? Will the NSC membership be expansive or more narrowly defined? The National Security Act of 1947 establishes a core group of principal officials that make up the NSC. Under President Clinton, the NSC was expanded to include the Secretary of the Treasury.

Clinton also established the National Economic Council, elevating the priority of economic issues. Following 9/11, the NSC became bifurcated into a traditional NSC and a Homeland Security Council (HSC). In the Obama administration, the HSC was dissolved and its responsibilities returned to the NSC structure.

The result was an NSC with two major components, national and homeland security, with defined responsibilities in their respective areas but also the ability to work together to address complex security issues. How will the Trump administration handle this coordination?

What will be the role of the NSC in policy formulation?

What will be the role of the NSC in policy formulation? Will President Trump want the NSC to develop policy options for deliberation by the principles or to have decisions brought forward for approval? President Clinton's first National Security Advisor Anthony Lake said he preferred to work with senior advisors to build consensus for presentation to the president.

A related question entails the nature of the relationship between the president and National Security Advisor. Will President Trump use Flynn to run the process or push him into a trusted advisor role?

How large will the NSC staff be?

How large will the NSC staff be? Under President Obama, the NSC had grown to over 400 staffers. With such a large staff, the NSC drifted into operations — some have used the term “micromanagement” — rather than remaining focused on policy development. This became a complaint throughout national security circles, as well as publicly in many former senior leader memoirs.

The large staff also translated into a more granular approach to the issues and an seemingly endless number of interagency meetings. Will the Trump NSC follow suit or return to policy development with operational execution decentralized to the cabinet departments?

What issues will the NSC be charged with managing? Normally, the NSC has regional components and special functional areas. As an example, the Obama NSC included cybersecurity, countering weapons of mass destruction and countering terrorism as key functional areas.

Will the issues be the same as those under the Obama administration or will President Trump have a greater focus on policy development issues related to the platform on which he ran, such as southern border security and immigration?

To what degree will the special topics be driven by events versus core issues? All NSCs have evolved, largely in response to perceived shortfalls and additional policy development requirements. After 9/11, the Bush NSC and the HSC oversaw the global war on terror and operations in Iraq and Afghanistan. During the Obama administration, special topics included the Iran nuclear deal and Cuban rapprochement.

To be sure, the NSC structure and processes directly reflects the personality of the president. The evolution from candidate to president will signal the national security priorities likely to be addressed in the Trump administration.

There are many ways the NSC may evolve, but history suggests that this transition sets the tone for how national security will be deliberated and ultimately decided in an administration.

Daniel M. Gerstein works at the nonprofit, nonpartisan RAND Corporation and is an adjunct professor at American University. A working group leader on the 2008 Project on National Security Reform (PNSR) which examined options for future NSCs, he was later the undersecretary (acting) and deputy undersecretary in the Science and Technology Directorate of the Department of Homeland Security from 2011 to 2014. Sarah M. Gerstein is a U.S. Army officer, a veteran of Iraq and Afghanistan, and a masters student at Yale University's Jackson Institute.

This commentary originally appeared on The Hill on December 2, 2016. Commentary gives RAND researchers a platform to convey insights based on their professional expertise and often on their peer-reviewed research and analysis.