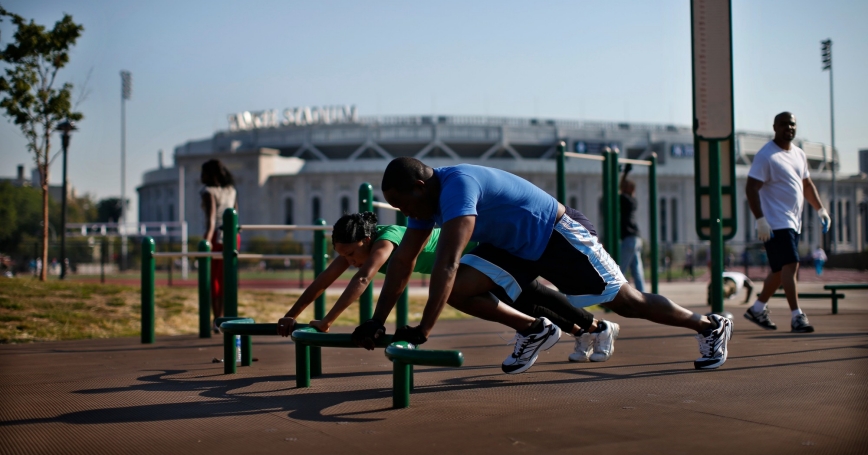 People work out at an outdoor exercise area at Macombs Dam Park in the Bronx, New York City, September 13, 2012

One of the many curious aspects of the recent presidential election was the virtual absence of discussion about America's health. To be sure, the Affordable Care Act, also known as Obamacare, was front and center, but the Obamacare debate has largely been about the costs of care and insurance coverage.

Neither candidate devoted much airtime to the return America is getting for spending over 17 percent of its gross domestic product on health care. The short answer is not nearly enough.

More than a decade ago, some of my RAND colleagues published a seminal study indicating that adult Americans, on average, receive roughly half of recommended care (e.g., an important lab test or the right medication for a diagnosed condition). This finding held across various types of care—preventive, acute, chronic—and across an equally varied set of conditions, as well as for a range of geographic areas and for different demographic subpopulations, like children and the elderly. Unfortunately, there is no reason to believe that things have improved since the study was published.

International comparisons of aggregate health outcomes provide additional evidence of the poor return America is getting for its national health expenditures. A 2015 report by the Commonwealth Fund, for example, found that the United States had the lowest life expectancy at birth and the highest infant mortality rate of the 13 high-income countries included in the study. The prevalence of chronic diseases was also highest in the United States. Ditto for the obesity rate.

Health care may account for as little as 10 percent of Americans' overall health.

It is important to recognize that even if the United States had a high-performing health care system, it is unlikely that it would improve aggregate health outcomes appreciably. This is because health care may account for as little as 10 percent of Americans' overall health, with the balance due to social and environmental factors, individual behaviors and genetics.

Unfortunately, efforts to address some of these other factors, in particular social and environmental ones, have also come up short. The Commonwealth Fund report noted that the United States spent less on social services—pensions, employment programs, supportive housing, etc.—than the comparison countries. A similar result was obtained by a group of researchers from RAND Europe, which also found a high correlation between social service spending and key health outcomes.

Yet money alone is not the answer. In fact, the United States spends almost double the amount of the next highest-spending country (France) on health care. Instead, existing resources could be better targeted at high-value care and away from unnecessary and low-value care. This can be achieved through a variety of means that include improving the ways in which health care provider performance is measured and reported; creating user-friendly tools for consumers that enable them to make valid price and quality comparisons; and altering the financial incentives faced by health care providers in ways that reward providing high-value care.

It is also important to be more aggressive in attacking cigarette smoking, reducing obesity, providing greater access to substance abuse treatment, improving automobile safety and providing better access to parks and other recreational facilities, among other public health measures. More fundamentally, investments should be increased in the social determinants of health, including education, affordable housing, job training and improving the overall physical environment.

In short, Americans should shift the focus of the health care debate to ways to improve population health and ensure the country is getting the biggest possible bang for its bucks.

Jeffrey Wasserman is vice president and director of RAND Health and a professor of public policy at the Pardee RAND Graduate School.

This commentary originally appeared on U.S. News & World Report on December 6, 2016. Commentary gives RAND researchers a platform to convey insights based on their professional expertise and often on their peer-reviewed research and analysis.