Hey Washington Experts — Don't Roll Your Eyes Over Trump, Roll Up Your Sleeves 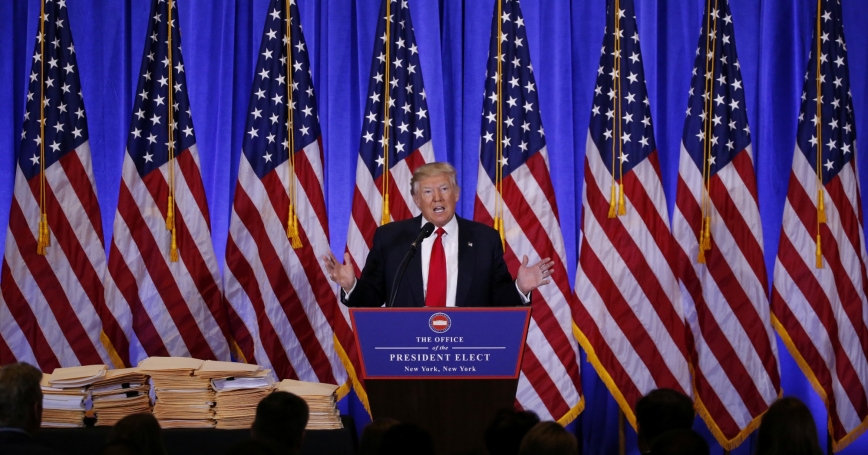 U.S. President-elect Donald Trump speaks during a news conference in the lobby of Trump Tower in New York City, January 11, 2017

If campaign statements and transition discussions are any indication, the incoming administration of President-elect Donald Trump will question many policies and business practices that have been in place over a long period of time.

During the campaign, Trump demonstrated a consistent willingness to abandon traditional ways, and was rewarded for it.

While it may be disconcerting to some, the incoming Trump administration's willingness to question basic principles of both policy and process could provide an opportunity to step back from old ways of doing business and to rethink policy and practice from the ground up.

For the policy community, acting productively could produce more positive results than challenging a duly elected president who has his own way of doing things. By focusing on objective analysis, the policy community and the incoming administration could find effective solutions to benefit the nation.

Tossing out the old Washington playbook could open up opportunities to craft new policies.

It is possible that tossing out the old Washington playbook could open up opportunities to craft new policies, better suited to the challenges facing our country.

For example, President-elect Trump's decision to receive a congratulatory phone call from Taiwan's Tsai Ing-wen raised eyebrows and not a few hackles in the foreign policy community. Reports of the call and later statements from Trump himself raised questions about whether the incoming administration would honor the United States' long-standing one-China policy, which recognizes the People's Republic of China as the Chinese government, but allows for American support to Taiwan.

Putting aside for the moment whether a presidential transition is the right time or a phone call is the right way to announce such a shift in policy, supporters of maintaining the status quo in the U.S. stance toward China now have an opportunity, if not a pressing need, to justify the continuance of the one-China policy. After being in place for almost 40 years, China watchers and other members of the U.S. foreign policy community who support continuity should make the case for it rather than just pointing to tradition and questioning the potential for change.

Trump's questioning of the costs of acquisitions such as the next version of Air Force One and the F-35 fighter aircraft could provide a new sense of urgency about the need to drive down procurement costs.

One of the factors driving up the cost of the new Air Force One is the need for the president to have redundant and secure means of communicating in case of a crisis. Many aspects of the F-35 program have driven up costs, including the desire for interservice and international interoperability. Requirements for both programs are probably justifiable, but those involved in their procurement should be able to turn to objective analysis and careful thought to make the case.

These examples come from the foreign and defense policy community, but there are examples from the domestic side as well. If the administration is skeptical about the value of public education, the efficacy of the Affordable Care Act, the validity of climate change, or other policy questions, defenders of current positions should view this skepticism as an opportunity to explain their preferred policies on their merits.

Scoffing at contrary views could turn newcomers to these issues against expert views. In many cases, these views are founded on sound analysis and careful thought. In those cases, making a clear and informed argument could be seen as an opportunity, not a burden.

In cases where tradition no longer serves U.S. national interests, skepticism can be healthy as it can spur new and better approaches to the problems facing the nation.

In either case, it is better to seek opportunities to examine, inform and educate than to refuse to question past policies and practices.

This commentary originally appeared on Fox News Channel on January 12, 2017. Commentary gives RAND researchers a platform to convey insights based on their professional expertise and often on their peer-reviewed research and analysis.