Kelly as DHS Chief Should Focus on Improving Employee Morale 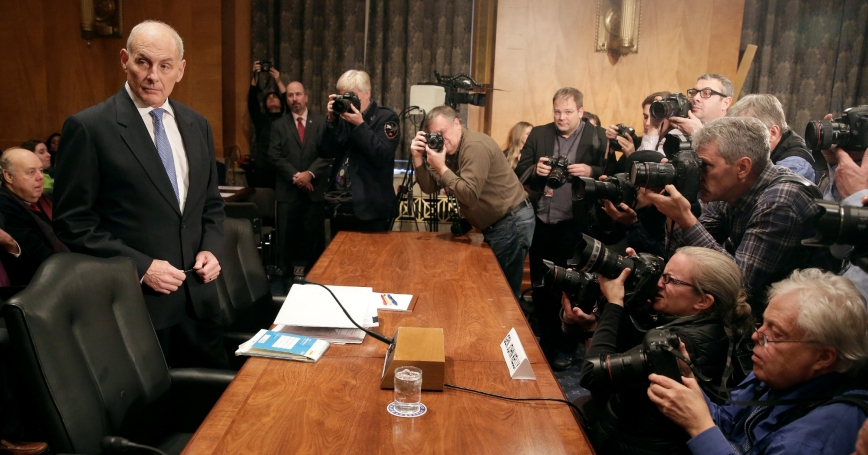 Retired General John Kelly arrives to testify before a Senate Homeland Security and Governmental Affairs Committee confirmation hearing on his nomination to be Secretary of the Department of Homeland Security, January 10, 2017

Under the leadership of Secretary Jeh Johnson, the Department of Homeland Security worked hard to build institutions and improve morale across the department. Despite the efforts, much work remains to be done on these issues. Efforts to build a department-wide requirements system, develop operational task forces, and stand-up management leadership forums have been initiated, yet continue to mature. Additionally, despite progress over previous years, the latest 2016 Employee Viewpoint Survey—the annual internal feedback from the workforce—shows that DHS remains at the very bottom of government organizations and that seven of its components are in the bottom 10 of the 320 organizations captured in the survey.

If confirmed by the Senate as the new head of DHS, retired Marine Gen. John Kelly and his new leadership team would be wise to keep morale in mind as they take the agency's reins. Strong communication with career employees, team building, demonstrating respect for work that has already been done and addressing inconsistencies including pay inequities could help avoid pitfalls that affect employee morale.

An important start would be communicating to the workforce that the new leadership understands DHS has a complex, diverse and visible mission set unlike any other department in the U.S. government. For Kelly, with 45 years of service in the Marine Corps, it important to understand that what works for the Pentagon may not work at DHS.

For example, attempting to use Department of Defense processes and structures would not work for DHS. The two departments have very different cultures that cut to the very ethos of workforces and missions. DoD is about warfighting, rules of engagement and applying lethal force. DHS is about law enforcement focused on securing the homeland while ensuring civil rights and liberties, and DHS law enforcement officers place a premium on the use of non-lethal, policing techniques.

The “command and control” structures are also very different within the two departments. While DoD has a hierarchical chain of command where the orders of senior commanders are issued and followed, DHS has a decentralized structure, where authorities and execution of duties fall to the individual components such as the Transportation Security Administration and Customs and Border Protection. Additionally, DHS has no authority to direct governors or even local officials, who usually have the lead in several important DHS mission areas, such as response to disasters. Rather, DHS leads by attraction.

The new political leadership could look for ways to build highly functioning teams that include the newly minted political appointees and senior career officials. Success in securing the homeland is also directly related to competence, preparations and response capabilities of state and local authorities as well as individual citizens. In other words, homeland security is a team sport that includes 320 million U.S. citizens as players. Those career uniformed and civilian officials who lead the 240,000 DHS professionals and the approximately 5 million more state and local government officials, law enforcement officers and first responders, and critical infrastructure workers that make up the Homeland Security enterprise must be included in these teams.

Maximum transparency during this period of transition and possible reform would undoubtedly be appreciated by the workforce.

The new leadership team also might seek ways to embrace the programs of its predecessors, including the efforts of the career workforce with its vast experience in securing the homeland. Few things threaten morale more than being told that everything you have been working on is irrelevant or needs to be changed. On the other hand, the political team will likely come in with administration goals and priorities that will drive change. In this delicate balance, ensuring that the political team clearly explains the goals and priorities of the administration to the workforce, includes them in the change process, and listens to their input will go a long way toward building high performing teams and improving employee morale. Maximum transparency during this period of transition and possible reform would undoubtedly be appreciated by the workforce.

Employee morale has been greatly affected by perceived inefficiencies and inequities. Differences in pay and allowances have caused great consternation in the past. Relating to compensation, Johnson signed a memorandum (PDF) in 2014 recommending “the administration pursue and prioritize regulations and legislation necessary to address job series realignment and premium pay structure that synchronizes personnel structure and compensation with the critical mission.” Recognizing and addressing these issues will be important for the new leadership team.

Inconsistencies regarding enforcement of laws also weigh heavily on the professional law enforcement officers dedicated to enforcing these mandates in a fair and consistent manner. Exceptions made through programs such as sanctuary cities in which certain U.S. cities decided not to prosecute undocumented immigrants create such inequities and therefore have the potential to aggravate morale issues.

Process reforms, which have seemingly been ongoing since the inception of DHS in 2002, will likely continue. Where possible, processes could be streamlined and non-critical requirements eliminated. In some cases, authorities will need to be clarified to allow DHS employees to focus on critical missions.

Building the morale of the DHS professional workforce should be a high priority of the incoming leadership team. The right words and deeds early in incoming Secretary Kelly's tenure could be critical. The workforce will be keenly watching.

This commentary originally appeared on The Hill on January 13, 2017. Commentary gives RAND researchers a platform to convey insights based on their professional expertise and often on their peer-reviewed research and analysis.