No Quick Fix with Russia 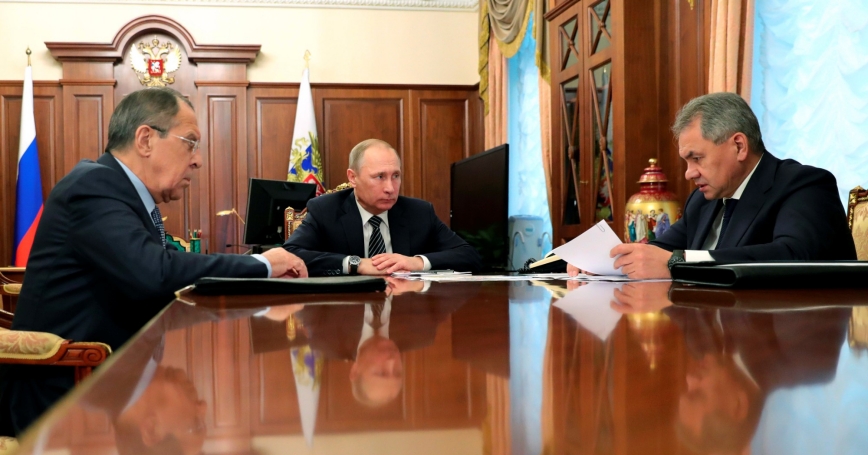 Russia's unprecedented interference in last November's U.S. presidential election is the latest sign of Moscow's determination to challenge the West and force acceptance of Russia as an indispensable great power. President Barack Obama on Thursday announced retaliatory steps that will impede some diplomatic and intelligence activities, but he stopped short of levying more economic sanctions.

This was prudent; the West should not seek to contain Russia. Both sides have an interest in maintaining some cooperation, especially in the security realm. A series of limited steps — rather than an attempt at a reset grand bargain — is more likely to improve Western and Russian security.

After the fall of the USSR in 1991, the West's goal was a Europe whole and free. This remains an aspiration, but Russia's military actions in Ukraine and Syria, threatening posture towards the Baltic countries, and violation of the Intermediate-Range Nuclear Forces Treaty alarm the West. These activities are riskier at a time when policy-level U.S. contacts with Russian leaders are few except for the dialogue on Syria and Ukraine, now winding down, between Secretary of State John Kerry and Foreign Minister Sergey Lavrov.

For its part, Russia rebukes the West over Ukraine-related sanctions, alleges that the West seeks regime change in Russia and charges that NATO's shift eastward of some forces threatens Russian security. The Kremlin has unleashed a propaganda war against the West, and employs political influence operations in Europe opposed to the EU and favoring populist, nationalist and anti-immigration positions. It is unclear whether Russian interventions influenced voting last June for Brexit and last month for Donald Trump, but the Kremlin accorded these efforts such priority that President Vladimir Putin personally may have been involved.

Intelligence community findings of Russian efforts to interfere in the U.S. election have given rise to bipartisan calls in the U.S. Congress for an investigation. Such an investigation may clarify facts and, especially with public exposure, might lead to a stronger U.S. response. Other voices contend that a summit meeting soon between President-elect Trump and Russian President Vladimir Putin is the best way to close gaps with Moscow.

Western differences with Russia are too numerous and deeply ingrained to be overcome in an early summit.

Western differences with Russia, however, are too numerous and deeply ingrained to be overcome in an early summit, especially keeping in mind that Putin's domestic popularity has been solidified by his strident anti-Western policies. Successful summits must be well prepared and not rushed; expectations must be held in check; and any agreements must be carefully vetted. In the past, successful U.S summits with Russian leaders were often ones at which nuclear arms control treaties were signed. Ill-prepared meetings, such as the 1961 Kennedy-Khrushchev encounter in Vienna and the 1986 Gorbachev-Reagan session in Reykjavik, accomplished little.

The Kremlin's current hostile policy toward the West, especially America, makes it harder to manage security risks. They are more likely to be reduced through a step-by-step process aimed at restoring dialogue, building confidence and strengthening cooperation.

An important step would be to upgrade military-to-military contacts. This would not connote acceptance of Russian aggression, but could avoid misunderstandings and lessen risks of escalation from minor incidents. At the height of the Cold War, accords were reached on incidents at sea and on a hotline to facilitate national-level emergency communications. In October 2015, America and Russia agreed on safety protocols for aircraft and drone flights in Syria, and military liaisons now talk regularly.

More collaboration would make sense on ways to counter violent extremism and terrorism. The Taliban resurgence in Afghanistan, and the feared return of Islamic State fighters homeward to the Russian North Caucasus and Central Asia, are quickening interest in Russia about finding ways to detect, intercept and de-radicalize them and prevent link-ups with domestic sleeper cells. De-radicalization is challenging and requires more subtle techniques than killing terrorists.

In a third area, lessening risks of nuclear proliferation and terrorism, the West and Russia are cooperating, such as on implementation of the Iran nuclear deal and the removal of high-risk nuclear materials from third countries. Last September Poland became the 31st country to be free of highly enriched uranium.

Russia and America are working in the Arctic Council to promote sustainable economic development and environmental protection, although broader geopolitical tensions could weaken cooperation. Transparency about military activities on both sides would benefit from resuming meetings of the Arctic Security Forces Round Table. Search and rescue cooperation should be enhanced as Arctic shipping increases and more scientific exploration takes place due to melting ice. Keeping the Arctic a zone of peace and cooperation ought to be a shared interest.

Low-profile steps like these can add to security and help put a floor under Russia's relations with the West. At the same time, sanctions against Russia over its actions in Ukraine, and NATO actions to reassure and protect allies, must continue.

For some time, relations with Russia will remain difficult. Reducing security risks will require Western patience, fortitude and diplomatic skill. No quick fix is likely to work, and solidarity with friends and allies, such as on Ukraine, will remain crucial.

This commentary originally appeared on U.S. News & World Report on December 30, 2016. Commentary gives RAND researchers a platform to convey insights based on their professional expertise and often on their peer-reviewed research and analysis.