Politics Across the Pond 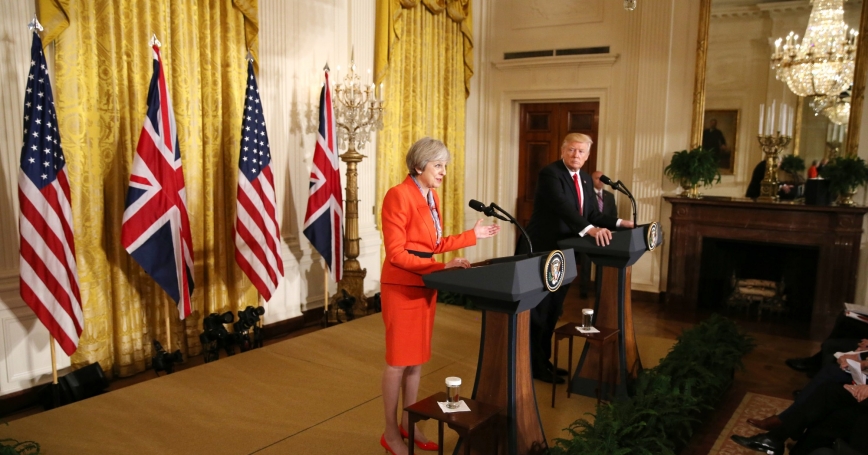 President Donald Trump welcomes British Prime Minister Theresa May to Washington on Friday, giving her the honor of being the first foreign leader to visit during his presidency. A big topic for discussion in the Oval Office will be “Brexit,” the British decision to leave the European Union and craft new trade, economic and other arrangements with European and other partners, to (re)create what May has called “Global Britain.”

May comes to Washington with a delicate brief. She will want to establish an effective working relationship with Trump, as strong as the famous one between Ronald Reagan and Margaret Thatcher with which it inevitably will be compared. She will want to bask in Trump's praise for Brexit. (“I think Brexit is going to end up being a great thing,” he told the Times of London.) And she will want to launch discussions of a trade deal with the U.S., which Trump is on record as supporting.

But May will also want to gain more steadfast U.S. support for the NATO alliance, which the president called “obsolete” in the same Times interview. She will want the new administration to stop skeptical comments on European Union cohesion (as Trump said to the Times, “if you ask me, others will leave”) as they do not help Britain's own negotiations with the EU about the terms of withdrawal, and—more importantly—over the terms of the future trade and economic relationship between the UK and the continent.

Starting talks on a bilateral agreement between the U.S. and the U.K. offers only political benefits for the time being. The U.K. could not sign or implement any such agreement until after its withdrawal from the European Union is fully effective. And that won't happen for several years. Britain will give the EU notice at the end of March that it is starting a two-year period before withdrawal, and it will have to negotiate both terms of the divorce and aspects of its new trade, economic and other relationships with the EU.

In a major address Jan. 17 on Brexit, May suggested that an additional transition period during which Britain would remain within the EU's customs union may be necessary to prevent a “cliff-edge” for British business in trading with Europe. And Britain's export and import trade with the EU is more than twice as large as its trade with the U.S.

For instance, European consumer groups, including those in Britain, object to U.S. food safety standards, fearing the health risks of U.S. genetically modified foods and “chlorinated chicken.” Britain had its own food scandal in the 1990's over “mad cow” disease contaminated beef. British and German environmental groups protest investor-state dispute settlement provisions. U.S. agriculture exports will threaten the much smaller U.K. sector. It will be difficult to construct rules of origin for a U.S.-U.K. agreement given the pervasiveness of close manufacturing value chains in Europe. Giving the U.K. equal access to U.S. government procurement markets will be controversial in a more protectionist America.

Financial services will be especially hard to negotiate. With British support, the EU side asked to cover banking services in the transatlantic trade pact, and some in Britain are already envisaging getting “passport” rights for their banks to operate in the U.S. from a U.S.-U.K. bilateral agreement. The U.S. Treasury and the Federal Reserve were strongly opposed to covering banking in a wider agreement, and would likely oppose it in a bilateral agreement as well. American regulators want to make sure of the soundness of U.S. banking institutions and so insist that foreign banks establish, and adequately capitalize, subsidiaries in the U.S. to offer financial services of all types.

Ultimately, a solution can be found to these and the many other provisions of a U.S.–U.K. bilateral agreement. But it won't be quick or without disagreements unless one side or the other concedes on the big things, which is unlikely since both sides need to demonstrate strength for other negotiations—the U.S. for NAFTA partners and the U.K. for its far more important talks with the EU. So even with strong political will on both sides, and congressional support, a U.S.–U.K. bilateral trade agreement probably won't go into effect during Trump's current term, or before the U.K.'s next parliamentary elections.

Whatever Trump and May say or agree to during this visit will be for political effect. Any real bargaining on the economics will take place years in the future.

Charles P. Ries is a former U.S. ambassador to Greece and the current vice president, International at the nonprofit, nonpartisan RAND Corporation.

This commentary originally appeared on U.S. News & World Report on January 27, 2017. Commentary gives RAND researchers a platform to convey insights based on their professional expertise and often on their peer-reviewed research and analysis.