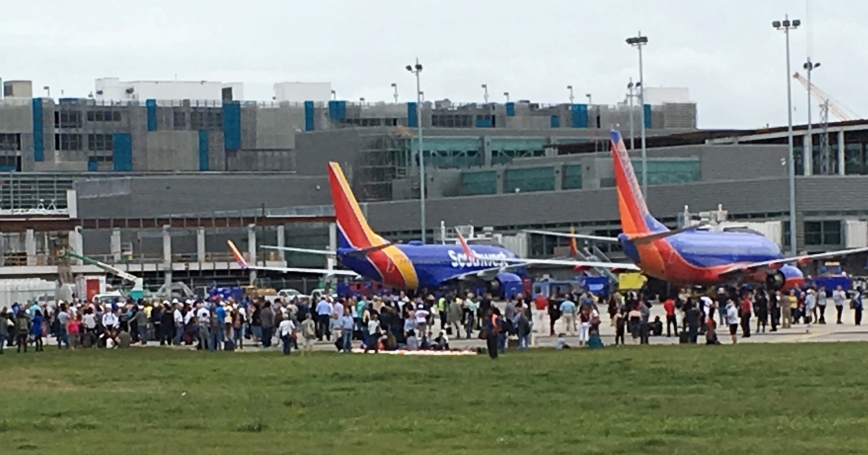 Travelers are evacuated out of the terminal and onto the tarmac after a shooting at Fort Lauderdale-Hollywood International Airport in Florida, January 6, 2017

Security footage shows what looks like an all-too-typical episode of lone-wolf terrorism: A single young man pulls a handgun from his waistband and begins firing at helpless victims in an airport baggage claim area. The results were certainly terrifying — five dead, six wounded, countless others traumatized as witnesses to the carnage.

But while this month's attack at the Fort Lauderdale-Hollywood Airport in Florida outwardly bore the hallmarks of a terrorist event, it should not be automatically lumped in with the many deadly acts of ideologically inspired violence that plague the globe — at least not based on what is now known about the attacker, 26-year-old Iraq War veteran Esteban Santiago.

More than 15 years after fear of international terrorism seized the world's consciousness on 9/11, Americans seem almost eager to explain away senseless acts of mass violence as being driven by ideology, preferably jihadi ideology. This is a mistake that only stokes the fear of terrorism and exaggerates the influence and reach of America's Islamist extremist foes.

As word of the Fort Lauderdale attack spread across the media landscape, journalists, online commentators and many Americans immediately sought to identify the terror nexus that would conveniently attribute the killings to jihadi motivations.

And there it was: Santiago had complained to the FBI that U.S. authorities were forcing him to watch Islamic State in Iraq and Syria (ISIS) videos in his home state of Alaska and heard voices urging him to join the terrorist group. He later told investigators that he had participated in jihadi online chat rooms, though this has not yet been corroborated.

To be sure, those who commit mass murder are seldom society's happy campers, but that should not necessarily expand America's terrorist list to include individuals with histories of aggression, substance abuse or mental illness who put on an ISIS or al Qaeda jersey on their way to the attack.

Who's to say if mental health interventions could have helped prevent some of the attacks that are commonly attributed to terrorist motives?

Who's to say if mental health interventions could have helped prevent some of the attacks that are commonly attributed to terrorist motives, but were committed by individuals with deep personal or emotional problems, some with twisted needs to self-explain their rage, even when their deadly missions are planned to end in their own deaths?

Was Muhammad Youssef Abdulazeez, the shooter who killed five people in Chattanooga, Tennessee in 2015, a lone-wolf terrorist dedicated to jihad or a disturbed individual with alcohol, drug and money problems whose family had sought and failed to get him therapy?

Was the 2016 killing of 49 people at a gay nightclub in Orlando, Florida an act of terror committed on behalf of ISIS as the killer, Omar Mateen, told police before he was killed, or was it an act of rage by an angry homophobe on steroids?

It is probably not lost on America's jihadist enemies that their ideology has become a conveyor for individual discontents. Whether planned or not, the jihadists have attracted a self-selecting audience of troubled souls through social media outreach, publicizing their atrocities and urging extreme violence.

All of this is reinforced by intense global media coverage of attacks with terrorist links.

Countering mass violence demands a distinction between those truly radicalized and inspired by jihadist ideology and those with lesser links, including those whose mental states and violent tendencies preexist their exposure to jihadist ideology.

But this is not a simple task in the face of a public that prefers easy answers.

To some audiences, ascribing murderous rampages to political motives may make more sense than a more nuanced explanation that includes mental illness. Terrorism gives Americans a clear culprit and a distant enemy to fear and loathe, whereas mental illness could arouse sympathy, inappropriately mitigating the violence.

And in a curious way, death at the hands of terrorists ennobles the dead and wounded. They are not merely random victims of mindless murder, but casualties of war.

Terrorism is also something that can seem easier to address: Security can be increased, jihadist organizations can be destroyed, violent extremism can be countered. A terrorist can be shot or shut up in prison.

Sorting out how to deal with mental disorders that sometimes don't show themselves until they erupt in bloodshed is a much more difficult task.

This commentary originally appeared on The Hill on January 26, 2017. Commentary gives RAND researchers a platform to convey insights based on their professional expertise and often on their peer-reviewed research and analysis.