UK Prisons Are in 'Crisis,' So What Can Be Done to Improve Performance? 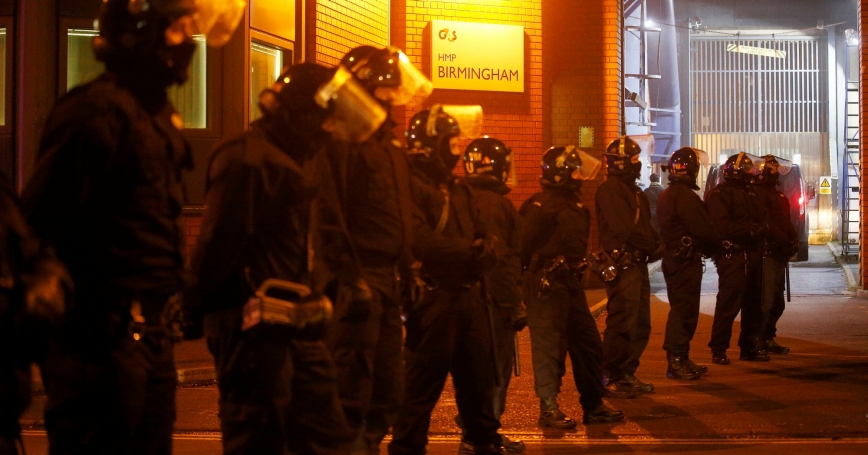 Police officers in riot gear stand outside Winson Green prison after a serious disturbance broke out, in Birmingham, Britain, December 16, 2016

The UK's prison service appears to be in crisis. The Ministry of Justice (MoJ) (PDF) published figures showing 119 self-inflicted deaths in prisons in England and Wales in 2016 — 29 more than the previous year and the highest number since records began in 1978. It also reported a record high of 37,784 self-harm incidents and 25,049 assault incidents.

On top of this, a dozen of the UK's prisons are now reported to have “chronic staff shortages,” with officers from prisons nationwide being drafted in to help maintain order.

In light of all the challenges being faced by the UK prison service, the Justice Committee launched an inquiry into the UK Government's programme of reforms to prisons (PDF). RAND Europe was one of the organisations to respond based on previous research on social impact bonds (SIBs) in HM Prison Peterborough, Drugs and Alcohol Payment by Results Pilots and Offender Liaison and Diversion Trial Schemes. RAND Europe's submission centred on lessons from these studies about how prison programmes and performance can be effectively measured.

One lesson is to avoid focusing on offenders in the prison system that are easiest to help in order to achieve performance targets e.g. those aimed at reducing reoffending among prisoners. Such behaviour could lead to the prison services neglecting individuals that are more difficult to engage with (e.g. those that had many previous convictions) at the expense of “easier targets.” RAND's evaluation of the SIB programme in HM Prison Peterborough focused on reducing the numbers of reconvictions, but was measured among all offenders, not just those who agreed to sign-up to the programme. As a result, an incentive was created to work with all eligible prisoners, no matter how difficult they were and how many previous convictions they had.

A second lesson is to avoid focusing on short-term outcomes over short measurement periods. It is arguably more important to capture the long-term impacts on the lives of prisoners, rather than quick feedback about a programme during a short period of time. More often than not, the impacts of prison programmes take longer to realise, so more realistic and appropriate timeframes may need to be set.

Prison performance measurement regimes also need to take into account the local context and population of the prison, as this could make targets easier to achieve in some areas compared to others. For example, HM Prison Peterborough was selected for the SIB programme because a relative high proportion of people released from the prison stayed in the local area. This made it easier to work with offenders on release over a longer period of time.

When developing performance measures for prisons, there may be a need to balance between nationally and locally defined measures.

At the same time, when developing performance measures for prisons, there may be a need to balance between nationally and locally defined measures. For example, while central government defined the main outcomes for the Drugs and Alcohol Payment by Results Pilots, local areas could also include additional outcomes that were relevant to their own contexts and populations. A similar approach for prisons may help to secure buy-in to any measures defined at a national level. This must be balanced, of course, by the need to ensure equity of access to support and services across prisons in England and Wales.

Another lesson is how to measure the outcomes of prison programmes that are delivered in partnership. The MoJ White Paper (PDF) sets out an ambition to work with health organisations, such as NHS England and Public Health England. Performance regimes may seek to capture the extent of collaboration. However, there is a broader need to align the goals of different services to deliver common outcomes for which credit can be shared, such as improved mental health for prisoners.

Such issues are highly relevant to liaison and diversion schemes (currently being evaluated by RAND Europe), which aim to improve the early identification of a range of vulnerabilities, such as mental health issues and learning disabilities, among people passing through the youth or adult criminal justice system. These schemes are a good example of health and justice system professionals working in partnership, despite there being challenges with the implementation.

Finally, alongside implementing any new performance regime for prisons, there is a need for robust and independent evaluations to understand the effects of programmes — both positive and negative. Evaluations don't just monitor outcomes — they examine how and why a programme achieves its targets, look for unintended consequences and identify the essential elements needed to replicate a successful programme elsewhere.

UK prisons are experiencing a very challenging period. The way that the performance of prison programmes is measured can have a significant role on their effectiveness and impact on offenders, as well as on practitioners. Our submission to the UK Justice Committee sought to offer lessons which the Justice Committee and policymakers can draw on to inform the prison reform agenda.

Emma Disley is the associate research group director for home affairs and social policies. On behalf of RAND Europe, she submitted a response as part of the Justice Committee's inquiry into the UK government's programme of reforms to prisons.

This commentary originally appeared in Criminal Law and Justice Weekly on February 18, 2017. Commentary gives RAND researchers a platform to convey insights based on their professional expertise and often on their peer-reviewed research and analysis.