Why a Travel Restriction Won't Stop Terrorism at Home 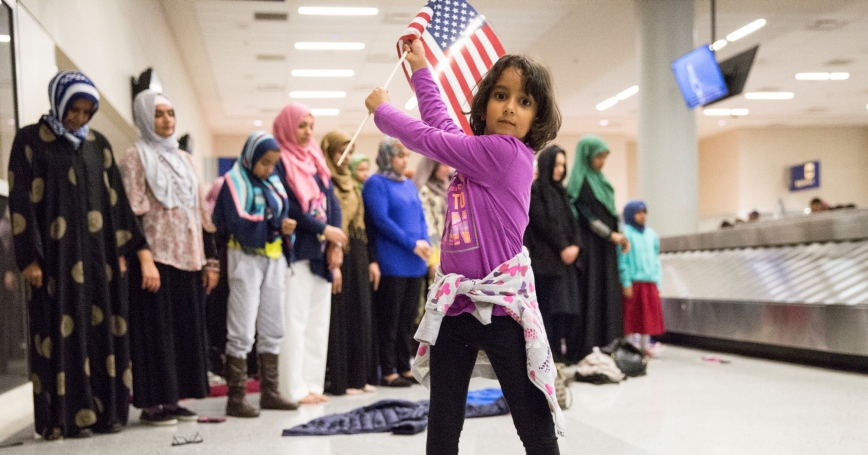 A girl dances while women pray at a protest against the Trump administration's travel restriction at Dallas/Fort Worth International Airport, Texas, January 29, 2017

The principal terrorist threat faced by the United States comes from residents who radicalize themselves and plot to carry out local attacks. Fortunately, their numbers have been relatively few. Despite constant exhortations from jihadist organizations abroad, their violent extremist ideology has gained little traction among America's Muslims.

The president's executive order is intended to protect the United States against spillover from the violent conflicts going on in six countries engulfed in blood civil wars: Syria, Iraq, Yemen, Libya, Somalia and Sudan. Washington has long considered Iran, the seventh country on the list, to be a top state sponsor of terrorism.

It's not unreasonable to seek a review of immigration, and refugee-vetting procedures make sense. Jihadist terrorists pose a multilayered threat. Improved intelligence, greater international cooperation and continuing military operations have made it more difficult to carry out ambitious, centrally directed strategic terrorist strikes like the 9/11 attacks.

But jihadist terrorist organizations have demonstrated their continued determination to attack commercial airliners on their way to the United States. And as we have seen in France and Belgium, terrorist volunteers who have joined the ranks of al Qaeda's affiliates or the Islamic State in Iraq and Syria (ISIS) may receive assistance in returning to link up with local jihadists and carry out attacks at home.

With thousands of nationals who have gone to fight in Syria and Iraq, Europe faces a much greater threat from returning fighters than the U.S., where, according to the FBI, more than 200 jihadist volunteers have tried to join jihadist fronts abroad.

We have no way of predicting how many future terrorist attacks or how many American lives may be saved by halting entries from the seven countries named in the recent executive order.

However, we do have a historical record with numbers that are informative.

Since 9/11, terrorists inspired by jihadist ideology have carried out 16 attacks in the United States: Seven involved fatalities and eight of them injured people. In the remaining case — the would-be Times Square bomber in 2010 — the device failed to detonate.

This is a low number, especially when considering it encompasses a period of more than 15 years. In the 1970s, the U.S. experienced 50 to 60 terrorist bombings a year, although most of the attacks were not intended to kill but were meant to be symbolic violence.

Some analyses might add a few more attacks to this list. The differences reflect judgments about motives, which can be murky.

In addition to the attacks, there have been almost 80 jihadist terrorist plots over these same 15 years. Working together, FBI agents and local police have been able to uncover and disrupt more than 80 percent of these — a remarkable record. In many cases, investigations began with tips from the Muslim community.

A total of 147 people in the United States participated in attacks or plotted others that were thwarted by the authorities. Again, this is a low number — an average of fewer than nine people a year since 9/11.

Most of these plots and attacks — 105 out of 147 — were planned by U.S. citizens. Another 20 of the plotters were legal permanent residents, most of whom arrived in the United States as children. In other words, 85 percent of the terrorists lived in the U.S a long time before carrying out an attack — they radicalized within the nation's borders.

A total of 89 people died in the jihadist attacks. Every one of these deaths was needless and tragic. However, the added risk to public safety in a country that averages 15,000 homicides a year was statistically minuscule.

The republic is not in peril.

What is at work here is terrorism — acts of violence calculated to create fear and alarm. It is often effective. Terrorism can also act as a condenser of society's broader anxieties. Illegal immigration has caused widespread concern, which amplifies the perceived terrorist threat.

Had this temporary prohibition been in effect since 9/11, how many lives would have been saved? Not one.

Had this temporary prohibition been in effect since 9/11, how many lives would have been saved? Not one. None of the fatalities resulted from attacks by individuals from the seven countries named in the directive. The directive also would not have prevented the 9/11 attacks. This is not an argument for adding to the list of proscribed countries.

The directive would have prevented the entry of two refugees involved in terrorism after their arrival in the U.S. One was an Iraqi refugee arrested in 2016 while plotting an attack in Houston. He had arrived in the United States as a teenager in 2009, seven years before his arrest. He had become a legal permanent resident in 2011.

The other was a Somali refugee who carried out a car-ramming and stabbing attack in November at Ohio State University, injuring 13 people. He had been in the country for two years.

Some of those arrested in terrorist attacks in the U.S. have been the sons of immigrants from Muslim-majority countries. The failure to identify these individuals before they entered the United States is not a flaw in the vetting process; it is our inability to predict human behavior years into the future.

And no one can forecast whose offspring will grow up to be a terrorist. There is no terrorism gene.

The terrorist threat is real and likely to persist. The campaign against al Qaeda and ISIS must continue. The U.S. needs to control its borders and know who is trying to enter, but any measures imposed should reflect actual terrorist risk, not terror.

This commentary originally appeared on The Hill on February 10, 2017. Commentary gives RAND researchers a platform to convey insights based on their professional expertise and often on their peer-reviewed research and analysis.