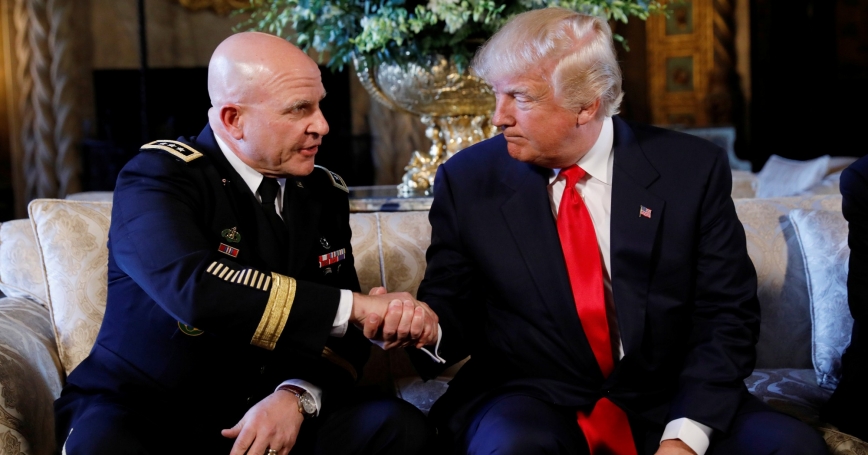 President Trump has proposed a Department of Defense spending increase of $54 billion, or over 10 percent above the current Fiscal Year 2017 budget. The offsets for the increased defense spending have not been specifically identified other than coming from “greater savings and efficiencies across the federal government.” While the debate rages as to the wisdom and benefit of such a federal spending rebalancing, a fundamental question remains: What is the national security strategy that supports this reallocation of resources?

So far, President Trump has spoken publicly about defense priorities only in broad terms. He has said the U.S. military should project strength, not aggression, and that it should avoid unnecessary foreign interventions and focus on defeating terrorist groups. He has suggested U.S. allies should assume a fair share of the cost of their defense. In remarks March 2 aboard the aircraft carrier USS Gerald R. Ford, he said the additional funding is necessary to pay for more ships, aircraft and other equipment, greater force levels and enhanced cyber capabilities.

Trump's first National Security Strategy, a congressionally mandated public report that lays out America's global interests, goals, and objectives, is not expected for months. But a broader public discussion of the strategies he hopes to advance through his proposed military build-up would be welcome.

Usually form follows function. That is, strategies and policies are developed, and then the necessary resources are allocated in order to accomplish the desired outcomes. In turn, the missions to be performed and operational concepts determine the numbers and types of formations required, which translates into resourcing decisions.

In the Cold War, the military force was built for a global war fought across three regions. At the end of the Cold War, the requirement became the ability to fight two nearly simultaneous major theater wars. During the post-Cold War period, forces also had to be prepared to participate in smaller-scale contingencies.

Even before the inauguration, then President-elect Trump promised to rebuild the military, signaling that defense spending would increase. At the time, Trump called for an active-duty Army of 540,000 soldiers, a Navy of 350 ships, an Air Force fleet of 1,200 fighter aircraft and a Marine Corps with 36 battalions.

In the absence of a publicly declared strategy and implications that the Obama strategy is no longer applicable, required operational capabilities, size and composition of the force, and time horizons for when the requirements must be met cannot be publicly debated.

Timing and assumptions concerning threats and risks are also important issues to address publicly. In the Obama administration, innovation and building future defense capabilities through the Department of Defense's Third Offset and Strategic Capabilities Office became a priority. In contrast, some are predicting the Trump administration will focus more resources on existing systems and less on next-generation systems. If one thinks that a major conflict is imminent, this would be prudent. However if the threat is likely to be a major power a decade into the future or more, different research, development and acquisition priorities could be essential. In what timeframes will the military capabilities need to be available?

The source of the funding for the offset begs an even greater question. Is the term defense being too narrowly defined? When the partial sources of the funding for the defense increase were identified as the diplomatic and foreign assistance budgets, the backlash in the form of a U.S. Global Leadership Coalition letter to Congressional leadership from over 500 signatories including 120 retired generals and admirals highlighted the importance of the Department of State and U.S. Agency for International Development as critical frontline defenses contributing to America's security. So does the transferring of funds in this manner actually place the nation at greater risk and even reduce the effectiveness of the fighting force?

While the answers to these questions may not change the administration's plans, they do need to be asked as a matter of the utmost urgency.

Nothing less than a comprehensive discussion of threats to U.S. interests and strategies to address them is in order. The new National Security Advisor, Lieutenant General H.R. McMaster appears to be well-prepared and well-positioned to lead such an endeavor, given his reputation for “straight talk.” In January, a white paper produced for Senate Armed Services Committee Chairman John McCain (R-AZ) called Restoring American Power (PDF) took a structured approach in seeking a plan to posture the U.S. military to achieve its strategic objectives through 2022. It could certainly serve as a model for such a review.

This commentary originally appeared on RealClearDefense on March 7, 2017. Commentary gives RAND researchers a platform to convey insights based on their professional expertise and often on their peer-reviewed research and analysis.