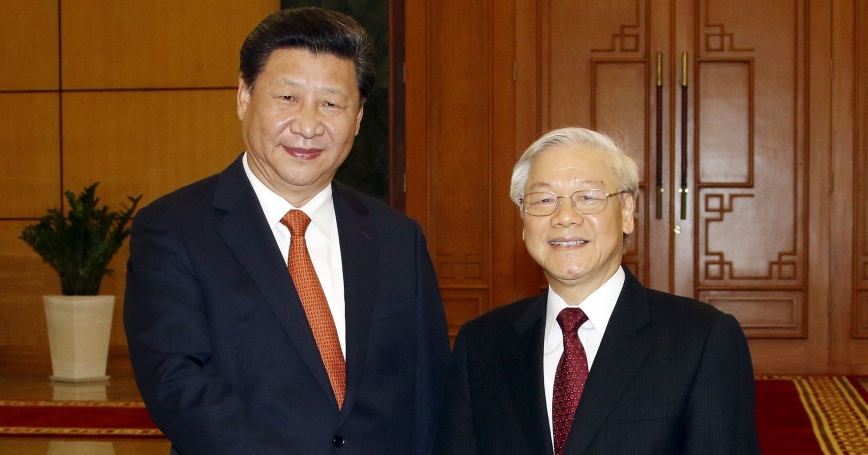 China's expanding military presence in the South China Sea has prompted Vietnam to enhance its ability to protect its own holdings in the region. In late November, for example, commercially available imagery revealed that Vietnam was dredging a new channel at Ladd Reef on the southwestern edge of the Spratly Islands, perhaps as a precursor to land reclamation or to improve access to other features (ChinaTimes, December 9, 2016). In the same month, Hanoi extended its sole runway and added new hangars on Spratly Island. Vietnam also reportedly fortified several of its holdings with what appear to be Israeli-built Extended Range Artillery (EXTRA) precision-guided rocket artillery launchers over the summer (Global Times, August 11, 2016).

Curiously, Chinese leaders have not punished Vietnam for any of these activities or even so much as complained about them. Instead, Beijing continues to maintain cordial and cooperative bilateral ties, with Chinese President Xi Jinping on January 12 hosting Vietnamese Secretary-General Nguyen Phu Trong in Beijing for bilateral talks. China has probably tolerated Vietnam's South China Sea activities because it feels increasingly confident in its improving military position throughout the region.

Chinese leaders have issued only indirect condemnations of recent Vietnamese activities in the South China Sea. For example, Beijing's foreign ministry officially responded to the reported deployment of EXTRA by stating that “China has indisputable sovereignty over the Nansha Islands [the Chinese name for the Spratly Islands] and their surrounding waters.” The ministry further noted that “China has always firmly opposed the illegal occupation of parts of China's Nansha Islands and reefs by certain countries and their illegal construction and military deployments on these islands and reefs” (China Daily, August 11, 2016). It is noteworthy that Beijing issued such measured and generic statements given the provocative nature of the PRC media report. Indeed, even the often-strident state-run media outlet Global Times gave Vietnam the benefit of the doubt, stating that it hoped the report was “only speculation from Western media” and the two sides should practice restraint to avoid a crisis (Global Times, August 11, 2016).

China's reaction to other Vietnamese actions has been similarly circumspect. The foreign ministry, for instance, responded to reports that Vietnam had expanded its runway by urging the “relevant country”—Vietnam was not specifically named—to “truly respect China's sovereignty and legitimate rights and interests” and to “immediately stop its illegal occupation and construction and withdraw their personnel and facilities” (FMPRC, November 18, 2016). Beijing's defense ministry also declined to identify Vietnam regarding the runway issue (China Military Online, November 30th, 2016). Both ministries instead left it up to Xinhua to later identify Vietnam as the country in question (Xinhua, November 18th, 2016). Separately, Hanoi's dredging activities at Ladd Reef prompted the foreign ministry to make similarly indirect statements (FMPRC, December 15, 2016; FMPRC, December 9, 2016).

Despite their mutual suspicion, Chinese and Vietnamese leaders have remained remarkably cordial and cooperative in multiple dimensions of the bilateral relationship. In late December, for example, Vietnam hosted a two-day conference on enhancing economic cooperation with China (Xinhua, December 28, 2016). On defense, both sides routinely hail their cooperation. In February 2009, Vietnam and China finalized the demarcation of their border. Since then, Hanoi and Beijing have engaged in a series of confidence-building measures that have included defense minister discussions and joint exercises along the border, the most recent of which was a “joint anti-terror” border exercise in July 2016 (VietnamNet Bridge, November 2, 2016; The Diplomat, July 30, 2016; Xinhua, August 30, 2016).

Even in the maritime domain, China and Vietnam tend to look past their differences.

Even in the most contentious of domains, the maritime domain, China and Vietnam tend to look past their differences. In mid-January, after meeting with counterparts in Beijing, Vietnamese Secretary-General Nguyen issued a joint “communiqué” stating that the two sides planned to “manage well their maritime difference, avoid actions that complicate the situation and escalate tensions, and safeguard the peace and stability of the South China Sea.” To be sure, maritime differences are assiduously avoided in favor of cooperation. In November, for instance, the Chinese and Vietnamese coast guards took part in a joint patrol to monitor fishing areas of the Gulf of Tonkin (People's Army Newspaper [Vietnam], November 9, 2016). Moreover, in a symbolic step, the Chinese navy in October made a first-ever port call to the international port within Vietnam's Cam Ranh Bay (The Diplomat, October 23, 2016). Indeed, Xi Jinping in November called for China and Vietnam to work together to maintain stability in the South China Sea—well after reports that Hanoi had deployed EXTRA on disputed features (Xinhua, November 20, 2016).

Beijing's considerable arsenal has enhanced its confidence to the point that China has decided only to quietly bolster its military defenses on disputed features. In November, for example, the Center for Strategic and International Studies' Asia Maritime Transparency Initiative assessed that China over the summer had deployed close-in weapon systems (CIWS) and anti-aircraft artillery on all of its holdings in the Spratly Islands. According to expert analysis, CIWS could be effective against sea-skimming cruise missiles, while anti-aircraft artillery could provide point defense for airfields and radar installations (AMTI, December 14, 2016). Vietnam has been actively acquiring cruise missiles that can be launched from a range of surface ships, such as Gepard-class frigates or Molniya-class corvettes, and from one of its six acquired Kilo-class submarines. In addition, Vietnam's air force continues to modernize its fixed-wing aircraft, which now features 36 Sukhoi Su-30s, in the hopes of providing Hanoi with maritime strike capabilities throughout the region.

China has deployed more high-profile defenses on Woody Island, the main island in the disputed Paracel Island chain within closer proximity to Vietnam. Beijing in mid-February 2016 deployed two batteries of eight Hongqi-9 (HQ-9) surface-to-air missile (SAM) launchers to Woody Island that enabled highly capable targeting of aircraft and missiles out to 120 nautical miles (Guancha, February 17, 2016). The deployment of this system—derived from the Russian-built S-300—is a permanent fixture and not tied to exercises like the previous two deployments (China Brief, March 28, 2016). Beijing may also seek to use recently constructed facilities throughout the Spratlys to house additional SAMs, though this remains unclear for the moment.

Separately, in October, Beijing opened its first desalination plant in the South China Sea on Woody Island, providing an important source of fresh water to grow and sustain the present population there of approximately 1,500 residents—most of whom are Chinese military personnel. In late December, Beijing initiated regular charter flights between Woody Island and Hainan to “improve the work and living conditions of the city's public servants and stationed soldiers” (Xinhua, December 22, 2016). With the desalination plant in place, Beijing will also have more fresh water available to help reduce the negative effects of operating weaponry in a high salt environment (The Diplomat, October 4, 2016). China might eventually decide to permanently station its fighter aircraft like the J-11B—which rotated through the island in 2015—on Woody Island, though sufficient fuel storage and hangar space would still be required (Defense News, November 8, 2015).

Judging from China's response thus far, it is fair to say that Beijing has chosen to tolerate recent Vietnamese construction activities in the South China Sea. However, China has a range of options to express its displeasure with Hanoi, such as emplacing a new structure in disputed waters, conducting military exercises, or stepping up sovereignty patrols in the region.

Any of these responses is possible, especially as tensions predictably rise in the South China Sea during the spring. In May 2014, for example, Beijing decided to emplace the Haiyang Shiyou oil rig in disputed waters, resulting in a months-long standoff between Chinese and Vietnamese coast guards until Beijing finally decided to remove the rig. It is unclear what motivated China to move the rig into the area in the first place, but the tactic was clearly designed to put pressure on Vietnam's sovereignty claims.

Chinese leaders might change their calculus if they believe Vietnam is trying to enlist the support of the U.S. or other partners to settle bilateral disputes. Hanoi's burgeoning security relationships with Japan, India, and the U.S. will be particularly sensitive to China. Beijing might also decide to more assertively and overtly challenge Vietnam if it assesses that Hanoi has acquired capabilities that can more effectively challenge China's military assets in the region. For example, for years Vietnam has been trying to procure from India the Brahmos sea-skimming supersonic anti-ship cruise missile, which could significantly endanger Chinese surface combatants. Recent reports also indicate that New Delhi might sell Hanoi the medium-range Akash SAM that might threaten China's fighter aircraft operations if acquired (Asia Times, January 11).

Finally, seasonal frictions over access to fishing and natural resources in the South China Sea could prompt increasingly aggressive Chinese tactics against Vietnamese vessels that might trigger an overtly military response. This week Vietnam slammed the imposition of a Chinese fishing ban from May to August in waters near the Paracel Islands—a tactic Beijing has employed annually since 1999. In this regard, the next few months should be instructive as to the future trajectory of the relationship.

Derek Grossman is a senior defense analyst at the nonprofit, nonpartisan RAND Corporation. He formerly served at the Defense Intelligence Agency as the daily intelligence briefer to the Assistant Secretary of Defense for Asian and Pacific Security Affairs at the Pentagon. The views expressed in this article are those of the author and do not reflect the official policy or position of the Defense Intelligence Agency, Department of Defense, or the U.S. government.

This commentary originally appeared on Jamestown Foundation's China Brief on March 2, 2017. Commentary gives RAND researchers a platform to convey insights based on their professional expertise and often on their peer-reviewed research and analysis.