Death by Nerve Gas: Two Arrests, Many Questions in Attack in Malaysia 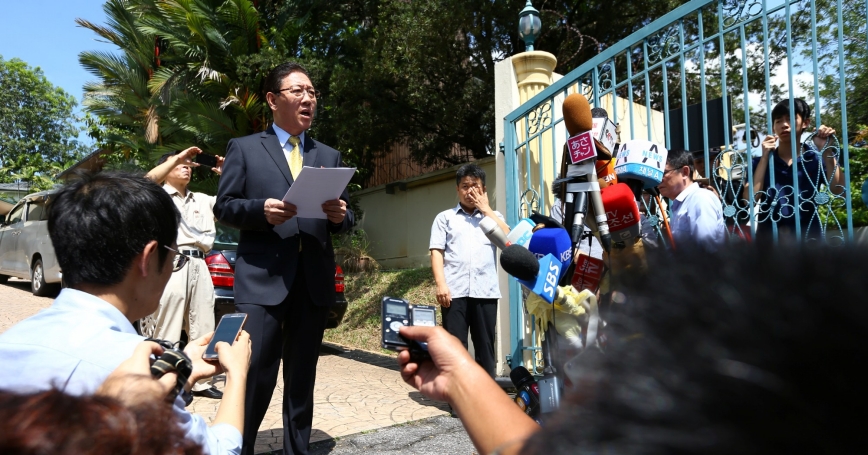 To North Korea, the chemical warfare agent VX may have looked like an ideal weapon for assassination. So little would be required to kill, it could easily be smuggled into Malaysia sealed in a pen cartridge or other small object. The tasteless and odorless oil-like substance also offered the opportunity to kill cleanly and quickly without the immediate appearance of murder.

Two women—one from Vietnam, the other Indonesia—were charged Wednesday in last month's killing of the estranged half-brother of North Korea's leader at the Kuala Lumpur airport in Malaysia. Airport surveillance video caught the attackers dashing up to victim Kim Jong Nam and rubbing his cheeks—even a drop would contain tens of lethal doses, according to tests conducted decades ago.

Many in the national security community suspect North Korea is behind the attack and are taken aback by the use of VX, a chemical weapon once common in superpower military arsenals. With the advent in 1997 of the Chemical Weapons Convention, a treaty that bans such weapons and requires their destruction, most of the world complied.

Since it is not a chemical that can be safely concocted in a kitchen laboratory, it likely was not made in Malaysia. Authorities there are trying to determine how the attackers came to possess VX. It could have sprung from North Korean chemical weapons laboratories or been purchased from third parties—perhaps a leftover stash from the Cold War.

One key question at this point: How will China respond to the murder of Kim Jong Nam with an outlawed chemical warfare agent? The country had reportedly provided him protection and warned North Korean leader Kim Jong Un to leave his older half-brother alone. Even though this assassination was carried out in Malaysia, it appears to be a serious affront to China.

Details of the murder are still being uncovered. North Korea may have wanted the death to look like it was due to a heart attack, which is what the North Korean embassy in Malaysia initially claimed. The North Korean embassy sent personnel to the hospital to claim the body soon after the death. They also reportedly tried to claim it before an autopsy was completed, or after only a superficial autopsy that would likely have suggested heart failure as the cause of death.

If the diabolic plan had succeeded, the greater world may have never known that Kim Jong Nam had been murdered. But the plan did not.

Malaysia conducted a thorough autopsy, which showed the nerve agent caused a “very serious paralysis” that killed Kim Jong Nam, the country's health minister said. North Korea has denounced the autopsy results and claimed the two women could not have used such a deadly toxin without harming themselves or those around them. Not true.

Those long-ago tests showed that the cheek was the most lethal place for a drop of VX. And that's what the women did—they applied the viscous liquid on Kim Jong Nam's cheeks and sprinted away. About 20 minutes later, he was dead. He likely experienced some combination of coughing, chest tightness, blurry vision, fatigue and eventually seizures as his nervous system was thoroughly disrupted.

The attackers did have ways to avoid contamination, including simply washing their hands thoroughly. The tests on humans also showed that 25 times as much VX would have to get on someone's hands to have the same effect as it would on the cheek. In addition, the attackers could have taken known antidotes to counter the effects of VX. Meanwhile, VX creates little vapor so it would pose no significant threat to bystanders, unlike other nerve agents.

However, the attackers had little room for error. They reportedly practiced the attack in test-runs at shopping malls. They had to avoid spilling the VX and properly deliver the fatal dose on Kim Jong Nam's face. And they had to avoid putting so much on him that it would affect others—those giving him care or unsuspecting people in the crowd.

Malaysian authorities have yet to assign responsibility to a specific country for this assassination, though the number of North Koreans who are suspects leads to the appearance of responsibility.

If a firm connection to North Korea can be made, Malaysia and other countries in East Asia should want to react strongly to the country's role in the crime. If the response does not pose grave costs for North Korea, Kim Jong Un may conclude that further serious provocations may be worth it because North Korea is unlikely to suffer significant costs.

The appearance that North Korea is responsible for this assassination with a chemical warfare agent also may have another gruesome upside for the country: It puts all North Korean defectors on notice that any one of them could be the next target of assassination—a threat that may serve to quiet many of them.

This commentary originally appeared on U.S. News & World Report on March 3, 2017. Commentary gives RAND researchers a platform to convey insights based on their professional expertise and often on their peer-reviewed research and analysis.