Five Simple Strategy Lessons for a New Secretary of Defense 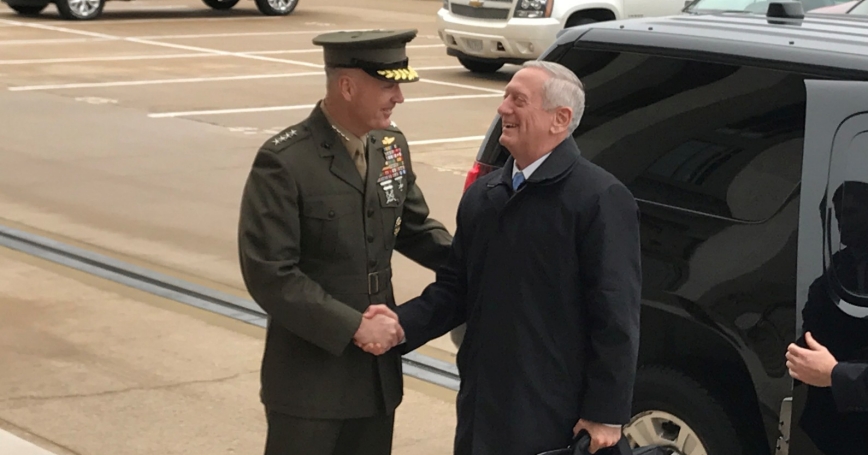 Shortly after taking office, President Donald Trump promised “a great rebuilding” of the United States military. This tall order will fall predominantly on his new Secretary of Defense, retired Marine General James Mattis. Over the next several months, Mattis will need to begin laying the intellectual groundwork to accomplish this objective. His team will craft a new Defense Strategic Review (formerly known as the Quadrennial Defense Review) and unveil a host of other issue and service-specific documents. If history is any precedent, most of these documents will be flashes in the pan, discussed by Washington policy wonks for a month or two before fading into relative obscurity. Yet, history also suggests that some strategy documents can have a more lasting impact and that the difference is often the result of how the strategies were developed as much as what they say. And so, setting aside the question of what policies the new administration's strategy documents should contain, there is a question of how to structure the strategy-making process to maximize their impact.

The U.S. Air Force's experience provides an interesting case study for why some strategies have left a mark, and others have passed largely unnoticed into the historical record. Though the service's strategic triumphs and pitfalls rarely made the front pages, those charged with developing Air Force strategy confront many of the same challenges that national—and defense-wide—strategists do: a fractured decision-making structure with competing bureaucratic interests, multiple stakeholders, and an uncertain security environment. The Air Force's experience yields five deceptively simple lessons about the strategy-making process that are widely applicable to defense strategies at large.

Political scientists argue that there are “policy windows,” brief periods of time when major changes in policy are possible. A policy window may open due to transformative world events, such as the end of the Cold War or 9-11, or the start of a new administration. Secretary Mattis enjoys such an open policy window today. He comes into office at the start of a new administration, with strong Congressional support and Presidential promises to boost defense spending. And yet, with other administration priorities such as infrastructure investments and tax cuts also on the horizon, this policy window may not last forever, and so the key will be targeting any fiscal windfall to address the services' modernization and readiness problems while he can.

Another, more subtle meaning of knowing your environment is understanding that what plays “inside the Pentagon” does not always translate to a wider audience. Here, Air Force strategic history proves illustrative. In November 2003, the Air Force published the U.S. Air Force Transformation Flight Plan (PDF). Never intended as a strategy, the Transformation Flight Plan was designed to illustrate to then-Secretary of Defense Donald Rumsfeld how the Air Force embraced his ideas about the future of warfare. In this regard, it proved quite successful. Outside the Pentagon, however, the document proved a public relations debacle. While many of the initiatives were relatively uncontroversial, some of the more cutting-edge technologies—like space-based weapons—drew widespread public criticism, from network news to the New York Times. To its critics, these Air Force initiatives seemed at best impractical and at worst, tone-deaf—ill-suited for the nation's wars in Iraq and Afghanistan.

This latter lesson, perhaps, is particularly relevant now. While defense strategies typically only attract attention within a narrow segment the Beltway's defense pundit class, this next set of documents may receive greater attention. With allies and adversaries still unsure of what the new Trump administration will mean for them, these defense strategies may very well be seen as a bellwether for the future of American foreign policy over the next several years.

Lesson #2: Encourage Ideas from Outside

It is a cliché now to say that anyone can have a good idea, but behind the platitude is a more nuanced lesson. The best ideas often come from leaders adapting others' ideas to solve different problems. For example, during the mid-1990s, then-Central Command Air Force commander Lt Gen John Jumper developed the idea of “aerospace expeditionary forces”—pre-packaged group aircraft that could deploy quickly in case of crisis—to respond to the threat of renewed Iraqi aggression. Later, then-Chief of Staff of the Air Force Gen Michael Ryan and Secretary of the Air Force F. Whitten Peters took Jumper's concept and applied it to the entire Air Force as part of their 2000 strategy document America's Air Force Vision 2020 (PDF). By grouping the Air Force into 10 Aerospace Expeditionary Forces deployed on a rotational basis, they could now more easily justify the Air Force's force structure to Congress, and also give airmen more predictability about their deployments, thereby easing the service's retention problems.

There is no shortage of external voices offering ideas about the future of American defense strategy. Indeed, the Chairman of the Senate Armed Services Committee, Senator John McCain recently released a white paper on the subject and there also have been a series of bipartisan, independent defense reviews in 2010 and then again in 2014, just to name a few. Exposure to external voices—even if they are ultimately dismissed after deliberation—only enriches the product in the end.

Lesson #3: Develop Strategy from the Top

While ideas can come from anywhere, ultimately, leaders need to “own” their strategies. Indeed, Air Force history includes a number of strategies that either never made it to publication or else were stillborn when the service's senior leaders failed to make the strategies their own. The same is true of broader defense strategy, with the Pentagon's senior leadership showing varying degrees of interest in the process over time. Perhaps, the most well-regarded and influential document of the last twenty-five years—the Bottom Up Review—came about partially thanks to the personal attention of then-Secretary of Defense Les Aspin in the early 1990s. In other cases, where the senior leadership showed less interest, the strategies proved less influential.

On a deeper level, there is the question of who at the top should develop strategy and specifically, whether it should be driven by the uniformed or the civilian leadership. Air Force history teaches a mixed lesson. While there are plenty of examples of strong Air Force Chiefs of Staff who dramatically shaped the Air Force during their tenures, some of the most significant strategic advances for the service came about from strong civilian leaders. Secretary of the Air Force Eugene Zuckert pushed the Air Force to break with its bomber focus and to embrace intercontinental ballistic missiles with Project Forecast; Air Force Secretary John Stetson built the service's capacity for long-range planning by creating the Long Range Planning Board; and Air Force Secretary Donald Rice articulated the service's soul with Global Reach-Global Power in the immediate aftermath of the Cold War.

This latter lesson may prove particularly challenging for Mattis' Pentagon. With over four decades in uniform and a distinguished war record, there is no question that Mattis brings to his new job deep knowledge of how military runs. And yet, there also is an argument for having an informed outsider who can spot the issues that those who grow up within the services may not always be able to see. And so the test for Mattis and his deputies will whether they can both rely on their deep expertise, but also step outside their experiences and view the department from the outside in.

Over the decades, Air Force strategies increasingly have become public relations documents, full of glossy photographs of airmen and aircraft and adorned with quotes from a variety of famous personalities extolling the virtues of airpower. Understanding the actual policy decisions contained in these documents often requires sifting out the substance from the fluff. Even then, most Air Force strategies are painstakingly worded to avoid controversy, even at the risk of obscuring their meaning.

Given the new secretary of defense's reputation for frankness, the next round of defense strategies very well be could blunter and more direct than the norm. And yet, strategies require more than frankness. They also need to be substantive and succinct, along with being sharply worded—with a clear, coherent message that echoes throughout the department's official statements but also through the rest of the United States' national security apparatus and are grounded in concrete policies.

Lesson #5: Focus on the Process as Much as on Product

In the end, only a handful of strategic documents stand the test of time. As one senior general officer remarked, most Air Force strategic documents have “relevance for 90 days or so. It gives speech writers things to write about and the Secretary and the Chief things to talk about,” but that is about it. Arguably, the same is true of most defense-level strategies as well. Some help define an administration's approach to a given issue, as when the 2001 Quadrennial Defense Review (PDF) articulated Donald Rumsfeld's views about the “revolution in military affairs” or the 2012 Defense Strategic Guidance (PDF) captured the Obama administration's pivot to Asia. And yet, even here, most documents fade into relative obscurity.

For most strategic documents, the process is equally important as—if not more important than—the product. Indeed, in interviews with a series of retired Air Force chiefs of staff and service secretaries, many admitted that the dialogues they had about the strategy were in some ways more important than what was finally put down on paper. It gave them the opportunity to engage with other key stakeholders about the future of the service. One can easily imagine how the strategy making process can provide Mattis and his team a similar opportunity, and, if it so chooses, allow it to solidify its relationships with the bureaucracy it now governs.

Ultimately, none of these five lessons are particularly earthshattering. And yet, it is these deceptively simple ones that are so hard to get right.

A former Army officer, Raphael S. Cohen is a political scientist with the nonprofit, nonpartisan RAND Corporation and an adjunct professor of Security Studies at Georgetown University's School of Foreign Service. This piece is adapted from a longer monograph, Air Force Strategic Planning: Past, Present and Future.

This commentary originally appeared on RealClearDefense on March 1, 2017. Commentary gives RAND researchers a platform to convey insights based on their professional expertise and often on their peer-reviewed research and analysis.