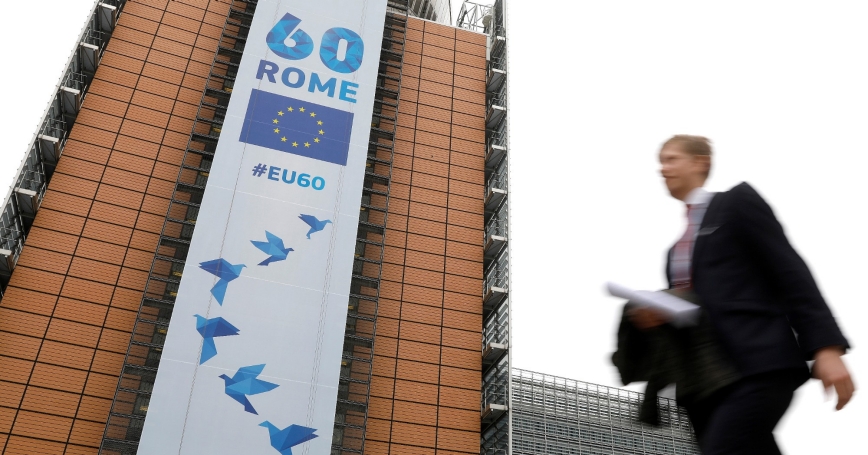 A man walks past the European Commission headquarters displaying a banner celebrating 60 years since the Treaty of Rome, Brussels, Belgium, March 20, 2017

On March 25, 1957, the Treaty of Rome was officially signed by the six original members of the European Economic Community—Belgium, France, Italy, Luxembourg, the Netherlands and West Germany. The treaty led to the eventual creation of the modern-day European Union and symbolized closer ties across Europe on goods, labor, services and capital.

Sixty years on from the Treaty of Rome, it can be argued that the EU is facing one of its most challenging periods. The geopolitical situation is changing rapidly, with the U.K. set to leave the EU and anti-EU sentiments on the rise in a number of member states. Since 2015, 1.4 million migrants have arrived in Europe, fleeing conflicts in the Middle East and Africa, and the EU's internal and external borders are coming under strain. EU security is also under threat, with a number of terrorist attacks taking place in Belgium, France and Germany in the past several years.

At this moment in time, the prospect of greater European integration remains in the balance. However, research and evidence suggests that there are many different social and economic benefits to closer ties across Europe. RAND Europe's own research on the EU single market; the Schengen Area; defense and foreign policies; and corruption supports this view.

The EU single market remains an area of untapped potential, with between $197 and $290 billion per year estimated to be realized. However, perhaps more striking is the economic potential of the EU's digital economy. According to the European Commission, completing the EU digital single market could contribute $480 billion per year to Europe's economy, create jobs and transform public services. These significant gains would partly be a result of increasing the use of online services, such as electronic procurement, and improving the EU's digital infrastructure.

Despite the public debate about the risks of open borders, a RAND Europe report found that the Schengen Area has brought about a number of social benefits to countries that are part of the area. The levels of crime in Schengen states that entered the area following the Schengen enlargement in 2007 (the Czech Republic, Poland, Hungary, Slovakia, Slovenia, Estonia, Latvia and Lithuania) actually decreased. In addition, there was an upward trend in trust between citizens and their governments and with other countries following this enlargement.

The same report found that ending the Schengen Agreement would come at a price for the 26 European countries that are part of the area. Establishing internal border controls in the Schengen Area would mean estimated yearly operating costs of between $2.16 billion and $3.23 billion. In addition, fixed one-off costs could reach $20.5 billion, depending on the time frame for establishing border controls and whether permanent construction would be needed.

Harmonizing foreign and defense policies across the EU member states has economic benefits, too. Reducing the number of diplomatic missions and pooling resources, for example, could save between $453 million and $1.4 billion a year (between six and 19 percent of the total annual spending). On defense, coordinating armed forces across the member states could save between $3.23 billion and 9.7 billion a year on wages alone.

Despite stark figures showing that corruption costs EU member states over $1 trillion in gross domestic product each year, new countries joining the EU have made positive strides towards addressing their own corruption levels. In preparing themselves for EU membership, Romania and Bulgaria have both made significant steps to reduce their levels of corruption. This was achieved through the Mechanism for Cooperation and Verification, which benchmarks new EU entrants across a number of policy areas, including corruption. Failing to act in these policy areas can lead to a loss of privileges associated with EU membership.

And these are just some examples. Closer ties and shared values across EU member states have provided benefits from a social and economic perspective. A less integrated Europe could represent a reversal of many positive social and economic changes that have been achieved in Europe in the past 60 years.

However, closer ties to the EU are currently seen as being politically unpopular and therefore unlikely. General elections in countries such as France and Germany will shed more light on the direction of European integration. Despite the noted benefits, any moves towards closer integration in Europe will fail to materialize in the absence of political will. The grand vision of European integration offered by the Treaty of Rome is being tested at the ripe age of 60 years.

Stijn Hoorens is an associate research director of RAND Europe and head of RAND’s Brussels office.

This commentary originally appeared on U.S. News & World Report on March 24, 2017. Commentary gives RAND researchers a platform to convey insights based on their professional expertise and often on their peer-reviewed research and analysis.