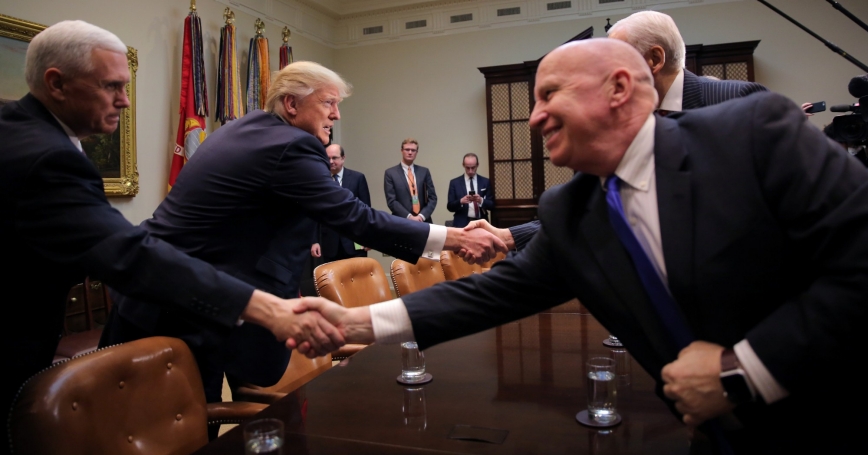 Since negotiations concluded for the Trans-Pacific Partnership (TPP) in late 2015, observers have argued that Asian policymakers would interpret failure of the pact as a sign of America's declining interest in the region or inability to assert leadership. Singapore's Prime Minister Lee Hsien Loong warned in 2015, “Failing to get the TPP done will hurt the credibility and standing of the U.S., not just in Asia, but worldwide.” Now that the U.S. has abandoned the pact, have the warnings proven prescient or overblown?

The TPP is a regional trade agreement involving the U.S. and 11 other Asian-Pacific countries that together comprise 40 percent of the world's economic output. The TPP's economic objectives included liberalization of trade in Asia, market reforms, and strengthened trade rules to support America's competitive industries and accord with the modern realities of digital commerce.

But the TPP also aimed to further the country's strategic interests in at least in three ways. First, U.S. leaders and strategists saw it as a way to strengthen the country's leadership in Asia by complementing its diplomatic and military power. Second, the TPP served as part of a broader effort to shore up an international order premised on market economics and liberal values. Third, the pact aimed to strengthen key partners; most notably Japan and Vietnam, by spurring badly needed domestic economic reforms and boosting growth.

The TPP thus served as an important component of the rebalance to Asia initiative. It also informed the U.S. approach to a rising China. By strengthening its leadership, bolstering its alliances and partnerships, and revitalizing an international order, Washington hoped to provide China strong incentives to integrate into and support a U.S.-led order.

America's withdrawal from the TPP in January 2017 marks a major blow to these ambitions.

Withdrawal from the TPP has exacerbated regional doubts about U.S. international leadership and of its role in Asia.

Several strategic consequences may already be observed. Because strategic effects, by nature, include many causes, one cannot attribute any of them solely to the TPP. However, withdrawal from the agreement has both contributed to, and reflected the following developments. Validating Prime Minister Lee's point, the withdrawal has exacerbated regional doubts about U.S. international leadership and of its role in Asia. To be clear, concern about Washington's commitment dogged the rebalance since it became clear that a fiscally strapped U.S., burdened with global woes, would only commit limited resources to the initiative.

Yet even more than U.S. military deployments, the TPP's fate powerfully communicated U.S. ambivalence about Asia, because the American people appeared to repudiate the trade deal by electing a president and congressional legislators opposed to it. Combined with fresh diplomatic tensions and the formal abandonment of the rebalance to Asia initiative, these developments have seriously strained the confidence of allies and partners. Sensing the concern, the Trump administration dispatched Secretary of Defense James Mattis, soon after taking office, to reassure the region.

A weakening of the U.S. leadership role has added to the deepening strategic rivalry between China and Japan.

Countries in Asia have responded to a wavering U.S. by seeking better terms with China while reaching out to its rivals, principally Japan. Philippine President Rodrigo Duterte, for example, has sought warmer relations with China while simultaneously stepping up ties with Japan. Hanoi has taken steps to stabilize ties with Beijing, while broadening its pursuit of markets through various bilateral free trade agreements to reduce its dependence on China. An emerging danger is that a less engaged U.S. could find itself in a passive position as flashpoints fester and regional actors drive events. A weakening of the U.S. leadership role has already added to the deepening strategic rivalry between China and Japan. Without strong U.S. leadership to mediate tensions, a long simmering enmity between the two Asian giants could explode into violence.

Another important consequence of the TPP's unraveling has been a further fracturing of the international order. Once again, the TPP's fate has both embodied and added to this trend. Symptomatic of this development, China and Russia have intensified criticism of longstanding international norms and values, a trend exacerbated by declining U.S. and European advocacy for democratic governance and human rights. Similarly, China has advanced rival institutions that duplicate in function Western-led institutions, but that reflect illiberal values. Indeed, China greeted the news of the U.S. withdrawal from TPP by advancing its own trade pact, the Regional Comprehensive Economic Partnership. The TPP's failure also leaves unresolved the stalled state of international trade regimes.

A risk is growing that countries frustrated with an unresponsive Western-led international order will consider alternative institutions.

A risk is growing that countries frustrated with an unresponsive Western-led international order will consider alternative institutions, as China has, or be tempted to pursue more naked assertions of power to secure and protect their interests. Reflecting trends in Europe and elsewhere, the Trump administration has eschewed plans to reinvigorate the international order in favor of beefing up the country's military muscle and pursuing bilateral negotiations to protect the country's interests.

Trade policy features an unavoidable tension between diplomatic and domestic economic purposes. For all the potential strategic benefits, the trade deal would have probably resulted in at best, marginal gains in employment for American workers, although American companies would have likely benefited. Manageable in prosperous times, this tension can prove a major vulnerability in periods of slow growth.

The Brexit vote, election of Donald Trump, and rise of nationalist parties throughout Europe revealed the depths of frustration felt by working and middle classes disenchanted with the promises of economic globalization. A sense of that depth can be seen in the fact that 81 percent of American counties saw their peak incomes at least 15 years ago. Even if U.S. leaders had adopted the TPP, therefore, its legitimacy could well have faced repeated challenges. Until architects of regional trade agreements can more compellingly outline how domestic workers can prosper under such arrangements, future U.S. trade agreements could well face similar fates.

Timothy Heath is a senior international defense research analyst at the RAND Corporation and member of the Pardee RAND Graduate School faculty. He is the author of the book, China's New Governing Party Paradigm: Political Renewal and the Pursuit of National Rejuvenation.

This commentary originally appeared on The Cipher Brief on March 26, 2017. Commentary gives RAND researchers a platform to convey insights based on their professional expertise and often on their peer-reviewed research and analysis.