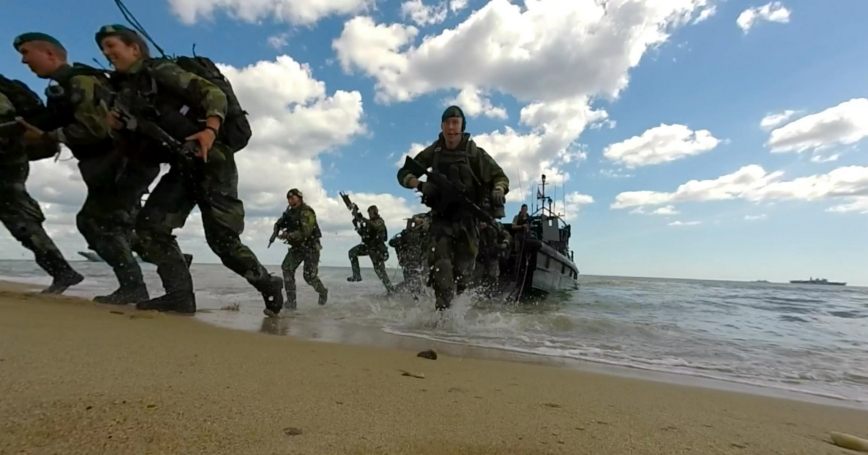 NATO Response Force and Allied Marines from the U.K., U.S., Sweden, and Finland simulate amphibious assaults on a Swedish beachhead during BALTOPS 2015

by Gregory DeMarco and Gene Germanovich

The Trump administration has vowed to strengthen the U.S. military, nudge NATO allies to honor their financial commitments, and, if possible, avoid confrontation with Russia. Fostering allied maritime and amphibious capability development would support all three policy aims. A push for U.S.-European amphibious interoperability at the alliance's upcoming summit in Brussels would reward allies that have invested in naval infantry forces and ships, while at the same time improving U.S. defense posture in a non-provocative manner that complements recent moves in land forces.

NATO's force-posture responses to Russia's 2014 annexation of Crimea have been primarily — though by no means exclusively — land-centric: enlarging its NATO Response Force, establishing a Very High Readiness Joint Task Force as NRF's spearhead force, and deploying rotational, battalion-sized formations to Poland and its three Baltic neighbors. A natural next step is to bolster allied maritime presence. Already, there are efforts to improve surface- and submarine-warfare capabilities; these should be supplemented with a focus on expeditionary capabilities and amphibious interoperability.

This approach has three principal benefits. First, Marines and naval infantry operating from amphibious ships offer a rapidly employable force with less escalatory risk than additional army deployments near Russian borders (although this too may be necessary). If designed as a scalable organization supported by sea-based logistics, one or more multinational amphibious task forces would enable the North Atlantic Council and Supreme Allied Commander Europe to shift forces expeditiously and based on the security environment, unencumbered by negotiations for host-nation access and infrastructure considerations. This would support recent NATO efforts to develop executable operational plans that allow speedier political-military decision-making. While not a substitute for additional heavy army forces, Marines and naval infantry enabled by organic sea- and airborne fires can boost NATO deterrence in northern Europe…

Lt. Col. Gregory DeMarco serves as the Branch Chief, European Regional Plans, Marine Corps Forces Europe and Africa. Gene Germanovich is a senior defense analyst at the nonprofit, nonpartisan RAND Corporation. From 2010 to 2016, he served as a strategy consultant to U.S. Marine Corps clients. The opinions expressed are theirs alone and do not necessarily reflect official positions or policies of the U.S. Marine Corps or Department of Defense, nor are they based on any RAND research or analysis.

This commentary originally appeared on Defense One on March 17, 2017. Commentary gives RAND researchers a platform to convey insights based on their professional expertise and often on their peer-reviewed research and analysis.