Attacks on Russia Will Only Increase 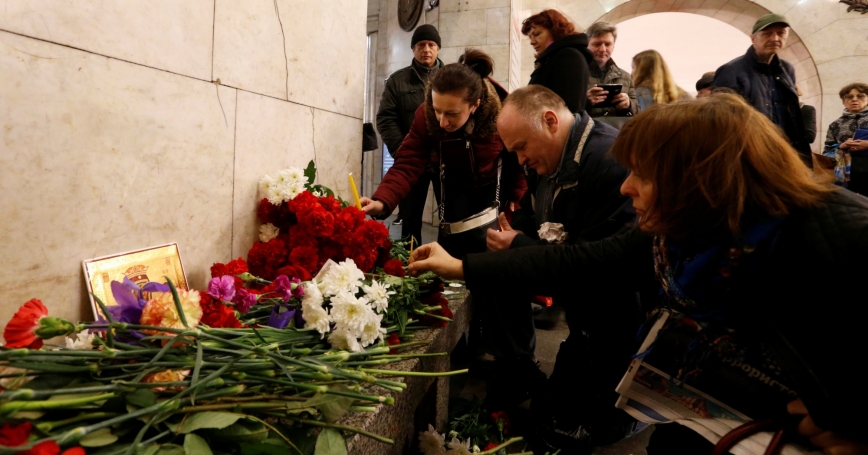 People leave candles in memory of victims of a blast in the St. Petersburg metro, Russia, April 4, 2017

The explosions had barely ripped through a tunnel between the Sennaya Ploshchad and Tekhnologichesky Institut stations in the St. Petersburg's Metro system on Monday afternoon, when supporters of the Islamic State in Iraq and Syria began celebrating online. ISIS supporters shared pictures of the bombing's aftermath over Gazwa, a pro-ISIS channel, even though no one has yet claimed responsibility for the deadly attack that has killed at least 10 people.

That Russia may have been attacked by jihadists should come as no surprise. In the early post-9/11 years, Russia trumpeted its counterterrorism cooperation with America to root out al-Qaeda. But over the years, attacks on Russian soil have largely been launched by local Sunni groups (some of whom espouse a pro-al-Qaeda worldview) with varying objectives, from ethno-nationalist concerns to the desire to spread sharia law throughout the Caucasus. During the 1990s, a number of rebel groups adopted more religious ideologies, a shift that many scholars attribute to the growing influence of foreign fighters from the Middle East and Central Asia, including the Ibn al-Khattab battalion. As the years wore on, Islamic militants launched many high-profile attacks on Russian soil, including ones specifically targeting transportation infrastructure—suicide bombings in the Moscow Metro in 2004 and 2010, an explosion that derailed the Moscow-St. Petersburg express railroad in 2007, and suicide attacks on the Domodedovo Airport in 2011 and on a bus in Volgograd in 2013.

For the most part, Putin responded by sending Russian security services into jihadist hot spots like Dagestan. Rhetorically, Putin and the Russian propaganda machine capitalize on these attacks by portraying all Kremlin enemies, both foreign and domestic, as part of a vast terrorist conspiracy. The Russian state seeks to craft an image of protector of the people.

Moscow's entanglements in the Middle East have aligned it against Sunnis and their interests.

Now, Moscow's entanglements in the Middle East have aligned it against Sunnis and their interests. In the months ahead, as Russia's involvement with the Syrian civil war deepens, it's a near-certainty that Sunni militants will intensify their burgeoning campaign against Russia.

Since Russia entered the war in Syria in 2015, it has been increasingly perceived as a vanguard of Shia interests. Russian President Vladimir Putin has provided substantial military aid to Syrian leader Bashar al-Assad, allying Russia with the Shia Iran and Lebanese Hezbollah, avowed enemies of Sunni jihadists. An ISIS propaganda video threatening retaliation against Russia was released just two weeks after the downing of Metrojet Flight 9268 over the Sinai in 2015. That attack was intended as a terrifying message to Putin that his actions in Syria, where the Russian air force was bombing Sunni rebel positions, would not go unreciprocated.

For Russia, the demographics are also daunting. There are thousands of Russian citizens fighting with ISIS, and another 5,000 to 7,000 Russian-speaking jihadists, making Russian the second-most popular language spoken within ISIS. This means that Sunni jihadist groups have a ready-made, native force to send back home to Russia, where the militants can more easily blend in with local populations while plotting further attacks.

Perhaps the key reason why Sunni attacks on Russia proper will increase, however, is the fallout between Sunni jihadists in the Caucasus—namely, the al-Qaeda-linked Caucasus Emirate and the Wilayat Qawqaz, ISIS's official representative on Russia's periphery. In recent years, many high-ranking jihadists have switched allegiance from the Caucasus Emirate to Wilayat Qawqaz. ISIS, in their eyes, is the most legitimate force espousing the austere brand of Salafism popular among jihadists, particularly the younger generation. The split between the two groups will continue to manifest, likely resulting in a process of outbidding where violent non-state groups rely on spectacular attacks to persuade potential acolytes that their terrorist or insurgent organization has a stronger resolve to fight the adversary—in this case, the Russian state and security services. The competition has even extended to the battlefield in Syria, which has only heightened the stakes.

With the caliphate now under strain, some militants might attempt to return home and link up with jihadists in Dagestan, Chechnya, or other restive Russian republics.

Much of the violence afflicting Russia may, in the end, stem from its own actions. Prior to the 2014 Winter Olympics in Sochi, Russian authorities, including the Federal Security Service of the Russian Federation, allegedly encouraged Sunni militants to leave Russia for Syria, where they could wage jihad against the Assad regime. But with the caliphate now under strain, some of these relocated militants might attempt to return home and link up with jihadists in Dagestan, Chechnya, or other restive Russian republics. Putin has expressed concern about this possibility, lamenting that after Syria, these militants will not simply “vanish into thin air.” Moreover, Russia's approach to counterinsurgency eschews addressing grievances, instead relying almost exclusively on military force. This means that while militants can be killed and captured, the root causes of the political violence go largely ignored, allowing the ideology fueling militant Salafists to fester indefinitely.

Another key variable in Russia's fight against jihadists is the newfound fame many citizens of the former Soviet states have garnered as leading members of ISIS. This includes the now-deceased Tarkhan Batirashvili, a Georgian who went by the pseudonym Abu Omar al-Shishani, or “Omar the Chechen.” Shishani appeared frequently in ISIS propaganda videos and ascended the ranks to become the group's minister of war, before being killed in a coalition airstrike near the Syrian city of Shaddadi in March 2016. In August 2016, ISIS released a video on YouTube featuring a masked fighter who stares directly at the camera, declaring: “Listen Putin, we will come to Russia and will kill you at your homes.”

Russia, however, is not altogether unprepared for a surge in Sunni militancy. It has made major progress in quelling the insurgency in Chechnya, a majority-Muslim area in the North Caucasus that was the site of two bloody wars in the 1990s. To rule Chechnya, Putin installed strongman Ramzan Kadyrov, who has masterfully and harshly decreased violence in the region. Accordingly, as I argued at Politico, Russia's brutal approach could be characterized as myopic for its focus on short-term security gains at the expense of longer-term stability, as the domestic population in large swaths of the Caucasus have been traumatized by torture, forced disappearances, and collective punishment.

There is yet another reason Russia should remain concerned about the St. Petersburg attack, regardless of who ultimately claims responsibility. For all of the success of its counterinsurgency campaign in Chechnya, counterterrorism is something different. While a counterinsurgency strategy can entail deploying vast numbers of soldiers using brute force, counterterrorism is more of a law-enforcement discipline, driven by intelligence and precision. Russia has proven that it is willing and able to employ brutal methods to defeat an insurgency, but has yet to demonstrate the capabilities necessary to deter and disrupt terrorist attacks on its soil, including devastating attacks on its transportation infrastructure.

In its quest to become more assertive geopolitically by assuming a more aggressive role abroad, Russia has made itself more vulnerable to terrorism at home. Sunni militants may see Russian actions in the Middle East and Eastern Europe and conclude that now, while Moscow is seemingly distracted, is the time to strike. ISIS and other jihadists could be preparing to take the fight to Russia's major cities in an attempt to prove their own relevance, while seeking to make good on repeated promises to make Putin and company pay for their misadventures in Muslim lands.

And still: All this could be a shrewd calculation by Putin, who may see the blow back of Sunni militancy at home as the inevitable trade-off of restoring Russian hegemony in its former sphere of influence, while bringing the country back to its rightful place as a true global power.

This commentary originally appeared on TheAtlantic.com on April 4, 2017.