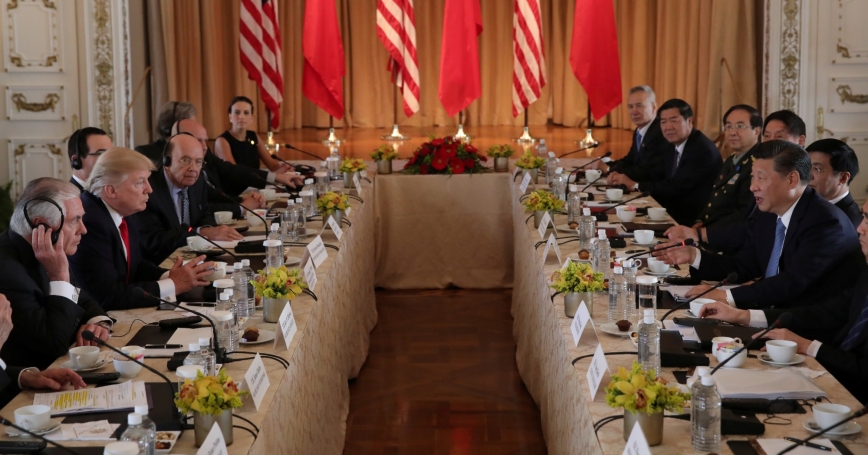 President Donald Trump faces the highest-stakes diplomatic challenge of his presidency on Thursday when he meets with Chinese President Xi Jinping to discuss the escalating threat from nuclear North Korea. True to form, North Korean leader Kim Jong-un defied both leaders Tuesday by launching yet another medium-range missile in violation of U.N. Security Council resolutions.

That the missile fizzled into the sea long before it neared Japan offers little comfort. The adventurist Kim began the New Year by promising to test an ICBM in 2017 that would be capable of delivering a nuclear warhead to the U.S. He may already have as many as 40 nuclear weapons and has threatened to use them against the U.S., South Korea and Japan.

Here are five potential dead-ends for American diplomacy, and one risky opportunity worth pursuing.

Option one: Trump could increase pressure on China, North Korea's largest trading partner, to squeeze North Korea by enforcing sanctions against the North until Kim stops or slows his nuclear weapon and ballistic missile programs. China has been unwilling to increase economic pressure that could cause the collapse of the North Korean regime, sparking chaos and a flood of refugees into China. Trump should say that he also does not want such outcomes, but that as a responsible U.S. leader he must contain the growing North Korean nuclear weapon threat; Xi might still demur.

Trump could try to force Xi's hand. Last year, Congress passed so-called “secondary sanctions” that would allow the U.S. to bar Chinese firms that do business with North Korea from the U.S. markets, including access to the U.S. banking system.

But Xi would likely threaten severe retaliation. Trump could be forced to back down or risk a calamitous confrontation that could shatter U.S.-China relations, precisely the outcome that would most benefit North Korea.

The administration should be reluctant to accept economic disaster to achieve sanctions that are unlikely to defuse the threat.

Option two: Trump could protest publicly, then privately dump the North Korean problem into Xi's lap and hope for the best. This would be unlikely to change China's behavior. Meanwhile, South Korea will elect a new president in early May to replace the impeached Park Geun-hye. The likely winner wants to improve relations with Pyongyang, including reopening the Kaesong industrial complex whose profits have helped fund the North Korean military.

Option three: Trump could secretly encourage Xi to use military force to topple Kim and install a pro-Chinese regime in Pyongyang as long as China removes the North Korean nukes. This option has been advocated by some U.S. commentators. Xi might eventually agree, since China is upset by North Korea's recent bad behavior.

But many South Koreans would find Chinese military intervention in North Korea to be an invasion of their country; the South would ask the U.S. for help. If Trump had green-lighted a Chinese intervention, he would have to demur as long as the Chinese stayed inside North Korea's borders. But South Korea might still send its military forces into the North to fight a Chinese takeover, risking a major regional war that could engulf U.S. forces based in South Korea. And under attack, North Korea leaders could decide to fire their nuclear weapons in all directions.

More broadly, the U.S. role in such an affair could leak sooner or later and U.S. credibility as an alliance partner would be shredded. Its treaty allies in Asia and elsewhere might begin to make their own security arrangements, and Japan and others might develop their own nuclear weapons.

A so-called “surgical strike” to take out North Korean nuclear weapons is impossible.

Option four: Trump could order unilateral preventive strikes against North Korea's nuclear weapon and missile facilities, perhaps despite opposition from China and South Korea. In retaliation, North Korea would likely fire artillery against Seoul, killing thousands or even hundreds of thousands of South Koreans. A so-called “surgical strike” to take out North Korean nuclear weapons is impossible. Previous U.S. presidents have been sorely tempted, but concluded that hundreds of targets would likely have to be struck. Even in a best-case scenario, in which the U.S. could destroy 90 percent of the North Korean nuclear weapons, North Korea might use the remaining 10 percent against South Korea, Japan and perhaps the U.S.

Option five: Trump could counter North Korean provocations with information operations that would seek to delegitimize Kim in the eyes of the North Korean elite, trying to prompt the overthrow of the Kim family regime. But this could take many years, and the new South Korean president in May would probably oppose it. This could risk shattering the U.S.-South Korean alliance, a goal North Korea has cherished for years. It could prompt South Korea to develop its own nuclear arsenal.

Risky opportunity: The upcoming South Korean election does give Trump a fresh opportunity, albeit risky. He could encourage Seoul to propose favorable terms for Korean reunification, pensioning off North Korean leaders, improving the standard of living in the North, and negotiating a peaceful end to the 60-year-standoff on the peninsula. Most North Korean elites would not face poverty, prison or severe marginalization along the lines of the disastrous U.S. de-Baathification of Iraq, but rather be promised a generous, East-German-style reunification deal.

Of course, the Kim family regime would feel profoundly threatened, and could lash out. But for Trump, proposing a deal that gives the North Korean elite an alternative to its murderous and unstable leader could be the safest and most realistic way to sheath North Korean nuclear weapons and safeguard the American people.

This commentary originally appeared on U.S. News & World Report on April 6, 2017. Commentary gives RAND researchers a platform to convey insights based on their professional expertise and often on their peer-reviewed research and analysis.