How the West Can Press Putin to Keep Assad in Order 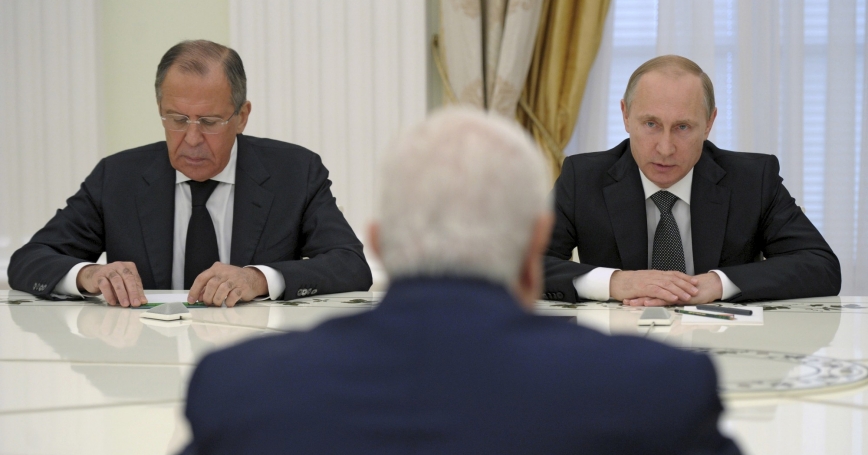 Russia is doing itself no favors on Syria. Its leadership defends the regime of Bashar al-Assad and denies strong evidence that it attacked civilians with sarin gas on April 4 in Idlib province.

This bluster makes it harder for Moscow to obtain the Western and regional help it needs to secure its interests in Syria. The West should require that Russia deliver concessions from Assad on chemical weapons before renewing negotiations on cease-fires and a political settlement.

Russian President Vladimir Putin claims the attack was the work of anti-Assad rebels, who he said may be planning a “similar provocation” elsewhere in Syria. This allegation recalls Assad's August 21, 2013, gassing to death of over 1,300 civilians in the Damascus suburb of Ghouta. Putin dismissed suggestions of an Assad role in that attack as “utter nonsense.” Yet afterward, Russia clamped down on Syria as President Barack Obama was promising a targeted military strike. Two weeks after the Ghouta attack, Russia and the United States announced an accord requiring Syria to provide a “comprehensive listing” of its chemical weapons arsenal and facilitate its “complete elimination.”

Russia, the United States and the Organization for the Prohibition of Chemical Weapons ensured the removal and destruction of those weapons that Assad declared. The Idlib attack, however, makes clear that Assad secretly hoarded some sarin and is violating the international Chemical Weapons Convention, which bans production, stockpiling and use of chemical weapons and precursors.

Idlib was the fourth confirmed use of sarin in warfare and the second for Assad.

As with Syrian and possibly Russian airstrikes last fall on hospitals and other civilian targets in opposition-held eastern Aleppo, the Idlib attack has led to strong criticism. President Trump called it a “heinous” action and British Prime Minister Theresa May said she was “appalled.”

Dropping barrel bombs on civilians is abhorrent, but chemical weapons use is widely considered to be beyond the pale. Despite blaming rebels, the Kremlin implicitly took Assad to task by calling the Idlib attack a “monstrous crime” and warning that support for him was not “unconditional.”

“Moscow has made heavy investments in Syria…so far without gaining the influence it wants.” This CIA assessment (PDF) from 1969 may also be true today: The Kremlin seems more interested than Assad in finding a political settlement to end Syria's tragedy.

In December 2015, Putin declared, “There is no solution other than a political one.” To set the stage for negotiations on a settlement, Russia and the United States negotiated multiple cease-fires in 2016, but none stuck. As the last was agreed in September, Assad declared his apparent opposition: The “Syrian state is determined to recapture every area from the terrorists.”

The U.S. must be careful of inadvertently empowering violent non-state actors, including Salafi groups like ISIS and Hay'at Tahrir al-Sham, Al-Qaeda's representative in Syria.

In the zero-sum game of the Syrian conflict, weakening Assad could have devastating second-order effects, from state failure to the consolidation of territory by jihadist groups. Russia could be indispensable to any prospects of finding a political transition “done in an orderly way,” to use Secretary of State Rex Tillerson's words, from conflict to post-conflict in Syria.

Moscow may want a political solution that reduces risks to its investments in substantial naval and air bases in western Syria, at Tartus and Khmeimim. These bases would be jeopardized if multiple insurgencies continued to plague the Assad regime.

Jordan's King Abdullah II may be correct in saying, “Putin has to find a political solution sooner rather than later.” Otherwise, Russia could risk further embarrassment from a client who has seemingly gone rogue.

Russia will not want to be left as the only great power in warring Syria after ISIS is defeated in Raqqa. On its own, Moscow lacks the strength, legitimacy and support to lead an international peace process. Russia has enraged Sunnis by backing the Shiite axis of the Assad regime, Iran and Hezbollah, and could not afford to fund substantial post-conflict reconstruction.

Thus, the West has cards to play. It could clarify to Moscow that the price of coleading a revived Geneva peace process is that Russia must induce Assad to cede all chemical weapons and abide by a newly negotiated cease-fire—a key prelude to a political settlement.

At an April 12 press conference in Moscow with Tillerson, Russian Foreign Minister Sergey Lavrov said that Russia was “putting as much pressure as possible on the Syrian cabinet.” This suggests Russia feels vulnerable to Western pressure to get Assad to give up his remaining chemical weapons. Lavrov added that Russia is “committed to completing this work.”

Moscow has achieved tactical successes in Syria, but without Western and regional help that leads to a political solution, Russia's long-term strategic interests could be at risk. And the internecine conflict in Syria could drag on.

Colin P. Clarke is a political scientist at the nonprofit, nonpartisan RAND Corporation. William Courtney is an adjunct senior fellow at RAND and was U.S. ambassador to Kazakhstan, Georgia and the U.S.-Soviet commission that implemented the Threshold Test Ban Treaty.

This commentary originally appeared on Newsweek on April 24, 2017. Commentary gives RAND researchers a platform to convey insights based on their professional expertise and often on their peer-reviewed research and analysis.