The Limits of Going It Alone in Syria 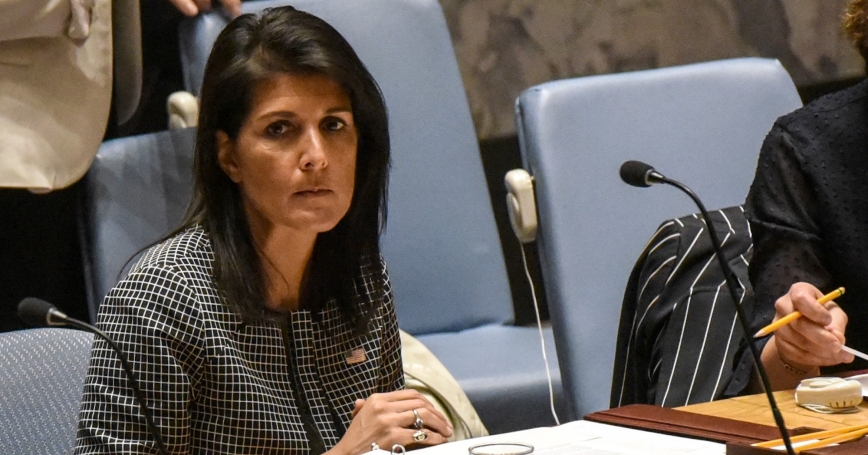 U.S. Ambassador to the United Nations Nikki Haley prepares to speak at a Security Council meeting on the situation in Syria, April 12, 2017

Last week's missile strikes against a Syrian government airbase in response to a horrific chemical weapons attack against civilians is becoming the latest Rorschach test for U.S. regional policy. For those backing stronger U.S. intervention in Syria, these strikes mark the beginning of more forceful American efforts to oust Syrian President Bashar Assad from power, either directly or by driving a wedge between Russia and Assad. Others see the strike as a deterrent against future chemical weapons use by Assad and possibly even a deterrent to other regional actors like Iran.

The mixed messages coming from various Trump administration officials only encourage observers to see what they'd like, fostering unrealistic expectations about what a limited military strike can achieve. The reality is that very little on the ground in Syria has changed in the aftermath of the missile strikes and what appears to be the Trump administration's newly hostile stance toward both Assad and his Russian backers following the attack.

Let's start with the most basic objective of the strikes — to deter Assad from future chemical weapons attacks. No one knows for sure how Assad thinks, but we can be pretty certain that survival is his main goal. The strike did not threaten his survival, as he was quick to demonstrate with nearly immediate Syrian government attacks against rebel areas launched from the very site hit by U.S. missiles. Without credibly threatening the regime's survival, it's not clear whether the U.S. strikes will be enough to deter Assad from future chemical attacks if he finds them useful for terrorizing the population as he seeks to regain control over the country.

Assad also has the assurance that the Trump administration, just like former President Barack Obama, will need to factor in a broader confrontation with Russia if its ultimate objective is to remove him from power. Despite the hopes of some American and other Western officials that Russia might come to its senses and finally cut Assad loose, Russian president Vladimir Putin has demonstrated few signs of doing so, continuing to double down in defense of Assad at the United Nations and countering mounting evidence that Assad was responsible for the chemical attack. Assad's other backer, Iran, has followed Russia's lead and may see even greater stakes in preserving Assad's survival for its regional ambitions.

Despite statements from some administration officials like U.S. Ambassador to the U.N. Nikki Haley suggesting Assad's days are numbered, other U.S. officials have insisted U.S. Syria policy is unchanged as the focus remains degrading the Islamic State group, not eliminating Assad. The Russians weren't happy about the attack, but their ultimate objective of protecting the Syrian regime does not appear to be threatened.

As satisfying as a military strike might have been, it hasn't fundamentally changed the dynamics of Syria's brutal six-year war.

Meanwhile, the strikes have not altered Assad's willingness and ability to continue massacring civilians through conventional means — this in a conflict that has already killed over 400,000 Syrians and forced the displacement of half of the country. As satisfying as a military strike might have been to hold Assad accountable for his atrocities, this action has not fundamentally changed the dynamics of Syria's brutal six-year civil war. And the increased tension with Russia that has resulted may make future cease-fires, and ultimately finding a political settlement to end the war, more difficult.

In order to translate the U.S. military action into achievable policy gains, it will be necessary to follow up on the missile strike with increased diplomatic coordination with international partners and institutions. It will also be important to recognize that adversaries like Russia and Iran will not simply bend to U.S. demands because of an airstrike, and will remain critical to finding a political solution to end the Syrian war whether we like it or not.

In the nonproliferation arena, past experience with countering unconventional weapons suggests a multilateral approach, and a combination of military and non-military tools, is most effective to reduce and ultimately eliminate these dangerous capabilities.

For example, the creation of the U.N. Special Commission after the Persian Gulf War did as much to expose and eliminate Iraq's chemical and biological weapons as military strikes during the war. The large arsenal of weapons discovered after the war ended demonstrated the need for a sustained on-the-ground presence of international inspectors to fully address this threat. Despite former Iraq leader Saddam Hussein's repeated attempts to obfuscate the efforts of international arms inspectors, the Special Commission and the International Atomic Energy Agency succeeded in destroying Iraq's chemical weapons production and much of its unconventional arsenal during the 1990s. This and other cases have shown that military options for destroying such heinous weapons are limited.

Following military strikes with a concerted and sustained international effort is far more likely to achieve success, not to mention bring more legitimacy and resources to nonproliferation efforts. If the American unilateral strikes in Syria are not followed by such a sustained effort, future unconventional threats from Syria will likely resume.

Much of the hard work ahead is diplomatic, particularly difficult when the State Department is dramatically understaffed. The Chemical Weapons Convention, which Syria was forced to join following the 2013 agreement to eliminate its chemical weapons arsenal, should be bolstered. The U.S. and others should invest resources into the Organization for the Protection of Chemical Weapons that implements such agreements.

Additionally, the U.S. could work with its allies and put more pressure on Russia to hold Assad accountable for the 2013 agreement it helped broker. It is one thing for Russia to back the survivability of the Assad regime, but it is another for Russia to be complicit in flagrant violation of international arms control agreements it has supported. As long as prohibited chemical weapons remain in Syria, the possibility that Assad might resort to their use again cannot be ruled out.

Beyond nonproliferation concerns, the U.S. will need a strategy that includes international partners as well as engagement with Russia to end the conflict in Syria. American and Russian interests in Syria are likely to remain at odds, but exploring common interests in even limited cease-fires to prevent further destabilization could set the stage for broader plans to end the war. There is little indication that the quick decision to strike Syria was made in the context of such a broader strategy. And unfortunately this strike alone may only complicate rather than accelerate the U.S.-led coalition fight against the Islamic State group.

So yes, cheer for the notion that war crimes should trigger a response. But temper expectations that a limited U.S. military strike can solve Syria.

This commentary originally appeared on U.S. News & World Report on April 14, 2017. Commentary gives RAND researchers a platform to convey insights based on their professional expertise and often on their peer-reviewed research and analysis.