The Snap Election, What's in It for Theresa May? 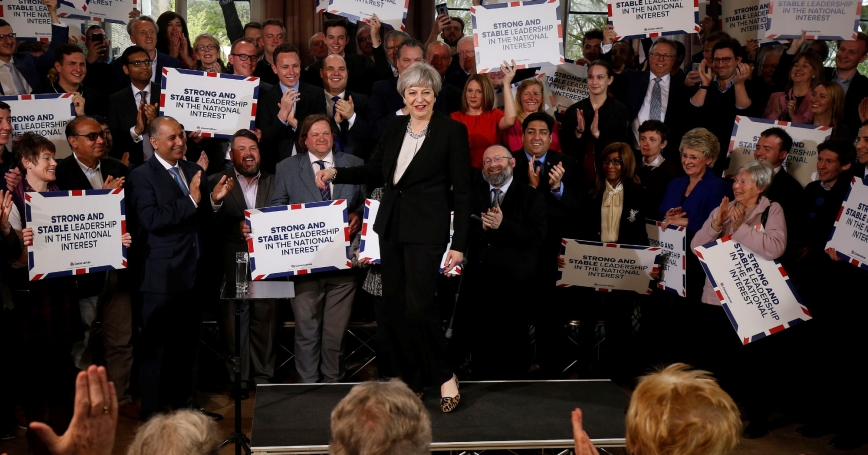 On April 18, British Prime Minister Theresa May surprised many by calling for a snap national parliamentary election to be held June 8. She said the other U.K. parties were guilty of “game playing,” which she argues risks “our ability to make a success of Brexit and it will cause damaging uncertainty and instability to the country.” Those other parties—the Labour Party, Scottish Nationalists and the Liberal Democrats—quickly came out in support of the snap poll. This ensures it will happen as May needed a two-thirds vote to call it.

Why would May take the risk of a national election, which otherwise wouldn't be needed until 2020, and what does she expect to gain from it?

In domestic political terms, calling an election now enables May to take decisive control of her party. Since the last national election in 2015, the Conservative Party has had only a slim majority (a working margin of 17). May became prime minister last summer after David Cameron, a “Remain” advocate, resigned in the aftermath of the Brexit referendum, and she demonstrated resolve in setting out a Brexit strategy in speeches, a parliamentary bill and the formal “Article 50” exit notification to the EU to begin the negotiating process. But divisions in her own party over how “hard” to make the break with the EU and a lack of a clear personal mandate have hamstrung her in putting a clear stamp on her government.

Disarray in the Labour Party may also have been a factor in May's calculus. Labour has veered sharply to the left, is some 20 points below the Tories in national polls and has lost many of its seats in Scotland. Economic factors may also have been in play. The economy remains relatively healthy, helped by the weakness of the pound, though inflation is up. It may not be so good in a couple of years as trade barriers with the EU may appear and foreign investment could stagnate. So the domestic political logic may be that it is better to hold the election now.

The snap election should also strengthen May's hand in the Brexit negotiations, but not necessarily for the reason she suggests. The Europeans in general were impressed by the statesmanship and tone of Britain's Article 50 notification.

But Britain suffers a double disadvantage in the negotiations, and the snap election could help somewhat with both. The first disadvantage is the structure of the Article 50 withdrawal talks. These have a timetable of two years, and the EU is making them about the financial settlement the U.K. must make with the other EU members to cover forward spending commitments, a figure that has been estimated at €60 billion, and about the rights of EU citizens after Brexit. This price tag, or “exit fee,” will be particularly unpopular.

The second disadvantage is the time it will likely take to construct a future economic and security relationship between the U.K. and the EU. The EU position is that these more important talks cannot begin until the “principles” of payment are agreed upon. Britain will need to agree to some sort of transition, because otherwise in two years it will be out of the EU Customs Union, facing an economically destructive “cliff-edge” of sudden tariffs and other trade barriers. But any attainable transition deal would likely prolong EU membership's unpopular aspects—like free movement of persons, jurisdiction of the European Court of Justice and European standards—as a bridge to the free-trade deal the U.K. wants for the long term.

Without the snap election now, May would have had to fight a 2020 general election on the basis of having accepted in 2019 an unpopular exit fee and an awkward transitional agreement, perhaps in a worsened economic climate. And her slim working majority might have allowed hard euro-skeptics to make disruptive amendments to the “Great Repeal Bill” needed to adopt EU regulations in U.K. law, aggravating the trade impact of leaving the EU. Not a good environment to fight a general election.

The decision to call a snap election could give May's government space and time to craft a better deal for the U.K. in Brexit, providing of course that she wins decisively as expected. But if she is defeated, she would join Margaret Thatcher, John Major and David Cameron, becoming the fourth U.K. prime minister to lose the job over Europe.

This commentary originally appeared on U.S. News & World Report on April 19, 2017. Commentary gives RAND researchers a platform to convey insights based on their professional expertise and often on their peer-reviewed research and analysis.