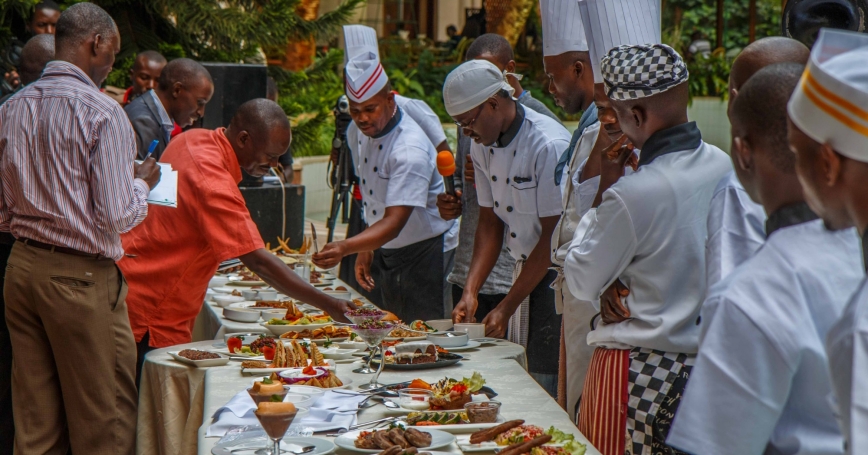 Photo by David Ledet for the Pardee Initiative

by Michele Abbott and Deborah A. Cohen

Ever heard of a millet burrito or African sushi? We hadn't either until we began working on a new project to promote the use of drought-tolerant, nutritious traditional grains—millet and sorghum—in Uganda. In a cooking competition staged as part of the project, participants developed a large number of creative and appetizing food combinations and recipes using these traditional grains. The results could signal that a new trend in Ugandan cuisine may be on the horizon, similar to how the use of quinoa has risen in South America.

The Pardee RAND Graduate School teamed up with the African Center for Economic Transformation to develop the initiative, which aims to make sorghum and millet a bigger presence in the everyday diet of Ugandans.

Millet and sorghum, nutritious grains native to Uganda and East Africa, have been steadily losing market share (PDF) to maize and imported grains like rice and wheat, leading to concerns about national food security in light of a changing climate. These traditional grains are nutritionally superior and better adapted to drought-prone conditions than maize or rice. For example, finger millet is rich in iron and sorghum has high levels of magnesium. In addition, millet can survive with much less rainfall than maize requires and can be stored for over 10 years, and sorghum crops perform well through drought and heat. However, the demand for wheat, maize, and rice has been fueled by hundreds of tasty and convenient products that have been developed using these ingredients, while few products containing millet or sorghum are commercially available. The recent rise in wheat and rice imports has led to a trade imbalance and threatens food security in Uganda.

To address this threat, we took an agricultural value-chain approach: Stimulate consumer demand in order to encourage small farmers to produce more millet and sorghum and ultimately increase their income. To create more demand for millet and sorghum products, more recipes need to be developed that use these grains. Millet is currently prepared mainly by cooking its flour with different amounts of water; with a little hot water and a lot of kneading, it becomes a doughy bread, called “kalo,” eaten with stews. With slightly more water it becomes a breakfast porridge, and with a lot more water it becomes a beverage called “bushera.” These few products require much time and effort in the kitchen and have relatively narrow market appeal. Yet our small amount of encouragement prompted dozens of people to make snacks, appetizers, entrees, and desserts with these ingredients.

Our long-term goal is sustainability—to have these new dishes and products become routine staples in supermarkets and restaurants. One popular restaurant and bar, Liquid Silk, participated in the project's Traditional Grains Restaurant Week by preparing a special menu for two days. One of the menu items, called the Afrishake (a high-protein milkshake made with ice cream and millet), was popular enough that the restaurant now includes it in its standard menu. 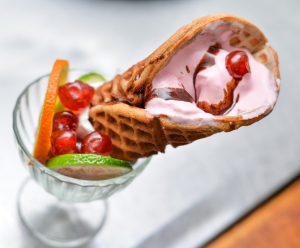 Photo by Saladin Media for the Pardee Initiative

When a team of local high school students won the second competition with a millet ice cream cone, their teacher shared the lessons provided by their winning experience when she presented their project at conferences in Ethiopia and Mexico. Jane Aleto, a student at Makerere University in Kampala, Uganda, entered the first competition with a concept poster for millet tamarind porridge, and by the third event was a product developer with samples ready to market. Another university student, Samuel Kipotich, brought a sorghum cereal prototype to the first competition and by the third competition was selling his products in a few local stores.

While more investment is needed to create successful commercial enterprises that produce high-quality millet and sorghum products for mass consumption, the Traditional Grains project has demonstrated a keen interest in and enthusiasm for these foods, as well as a potential consumer market base. The recipes that received the most enthusiastic response will eventually be available on the African Centre for Economic Transformation website. Meanwhile, in the near future your favorite restaurant just might offer a millet pizza with a sorghum salad, and millet pudding for dessert.

Michele Abbott is an assistant policy researcher at the nonprofit, nonpartisan RAND Corporation and a Ph.D. candidate at the Pardee RAND Graduate School. Deborah Cohen is a senior scientist at the RAND Corporation. This blog post was written for the Pardee Initiative for Global Human Progress.