A Risk Worth Taking? The Rationale Behind Prime Minister May's Early Election Gambit 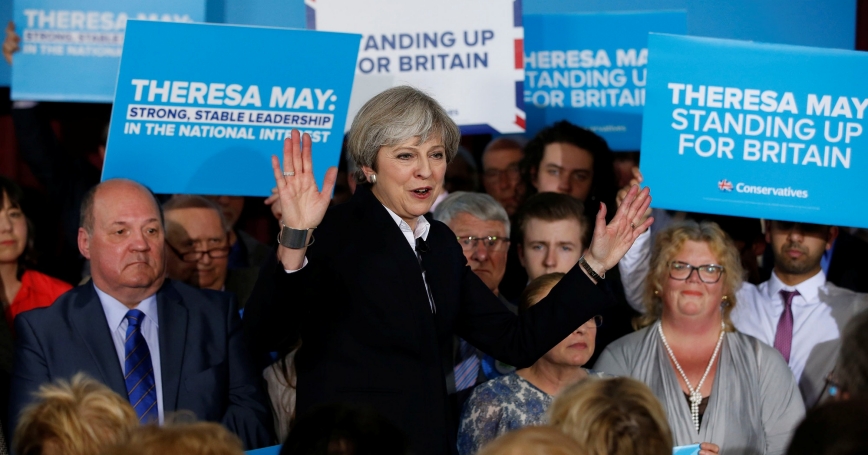 British Prime Minister Theresa May attends a rally in Ormskirk, Britain, May 1, 2017

British Prime Minister Theresa May sprung an Easter surprise on much of the British electorate by calling for a June 8 “snap” election. This proposal was confirmed the following day by a wide majority in the House of Commons, and the U.K. will now undertake its fourth significant vote in as many years — following the 2014 Scottish referendum, the 2015 U.K. general election and 2016 EU referendum.

This is a calculated risk for the newly minted prime minister, one that could give her a political boost and strengthen her hand heading into difficult Brexit negotiations with the EU, or it could mean the end of her term in office. It's up to the electorate to decide.

In the U.K. it has been regular practice to call elections “early” to provide the sitting government with the best chance in succeeding.

To many around the world, the ability to call elections outside of a fixed cycle may seem unusual. Most Western governments only hold national leadership elections on a fixed-term basis or when the current government falls (for example a regular 4-year cycle in the U.S. and Germany, and a 5-year cycle in France), but in the U.K. it has been regular practice to call elections “early” to provide the sitting government with the best chance in succeeding at the polls; indeed, this has happened four other times in the U.K. in the past 35 years (in the 1983, 1987, 2001 and 2005 general elections). Since 2010, the U.K. Fixed Parliaments Act limited the ability of the prime minister to call early elections without a 2/3 majority vote in the House of Commons, which is why May required a parliamentary vote for this election to move forward.

Since taking over as British prime minister following David Cameron's resignation after the EU referendum, May had repeatedly rejected calls for an early election. So what has changed her mind, and what might the prime minister hope to gain from a plebiscite only two years on from the last general election? There are at least three potential benefits which might have driven her decision:

She can consolidate power. An early general election gives the prime minister the opportunity to take advantage of her party's dominant position in the polls and legitimize and consolidate her grip over her own party. Although May's Conservative Party has regularly out-polled the Labour opposition during May's term as prime minister, this has grown even greater in the past weeks, with two recent polls placing a Tory (conservative) lead over Labour at 48 percent to 24 percent, and 46 percent to 25 percent. This suggests that the snap election will result in a considerable increase in the Conservatives' 17-seat majority in Parliament. And although UK polls are notoriously volatile, the prime minister has judged that this represents an outstanding opportunity to strengthen the Conservative majority at a time when she needs it most. A strong election result would also strengthen May's political legitimacy within both the “Remain” and Euroskeptic wings of her party as she navigates difficult Brexit discussions with the EU.

A positive election result would significantly strengthen May's negotiating position with respect to the British exit from the EU.

She can strengthen her negotiating position on Brexit. A positive election result would significantly strengthen the prime minister's negotiating position with respect to the British exit from the EU — both from inside the U.K. and with her European partners and adversaries. The early election has already been welcomed by European leaders; for example, European Parliament President Antonio Tajani, on a visit to London, said that the U.K. election would mean continuity in the U.K. government throughout the exit discussions without the distraction of a U.K. election just after negotiations conclude. For May, an election victory would also allow her to claim a popular mandate for her Brexit negotiating position and increase her freedom of action within her own party. Because the Conservative party was split during the Brexit campaign, the prime minister currently has to avoid alienating both the left and right of her party due to her small majority. An election win with an increased majority would give her much more latitude to conduct negotiations on her terms — and many have speculated that this may give her the ability to push for a “softer” Brexit with a generous transition exit agreement, which will be welcomed by business and those who seek economic stability post-Brexit.

She can give herself a two-year buffer to rebuild her popularity post-Brexit. A successful election campaign would not only make Brexit negotiations easier for the prime minister now, but it could also make her life post-Brexit more palatable as well. Without an early election, the prime minister would face conducting a general election in 2020, only a year after Brexit negotiations are expected to conclude and in an environment where much of the electorate may be dissatisfied with the U.K. exit terms and conditions. By pushing an election two years into the future, May gives herself a buffer to recover her popular standing in the aftermath of difficult and unpopular Brexit talks. This also allows the post-Brexit environment an opportunity to stabilize, which is likely to play to the government's benefit. An additional benefit of this two year delay means that the prime minister can primarily focus on Brexit negotiations in the short term before needing to shift her attentions to a future general election campaign.

Of course, such a strategy is not without its risks. There have been a number of electoral shocks over the past year — the EU referendum, the U.S. election of President Donald Trump and a turbulent French presidential race — and there is a small possibility that May could join Cameron, Hillary Clinton and François Hollande as world leaders who have fallen victim to a volatile electorate in the past 12 months.

Still, if the calculated risk of a successful early election pays off, May could enter a period of turbulent Brexit negotiations with a stronger electoral mandate, increased freedom of action to conclude Brexit discussions with her European counterparts and a post-Brexit future which provides her with a much better starting point from which to fight a 2022 general election. For her, it presumably feels like a gamble worth taking.

This commentary originally appeared on U.S. News & World Report on May 11, 2017. Commentary gives RAND researchers a platform to convey insights based on their professional expertise and often on their peer-reviewed research and analysis.