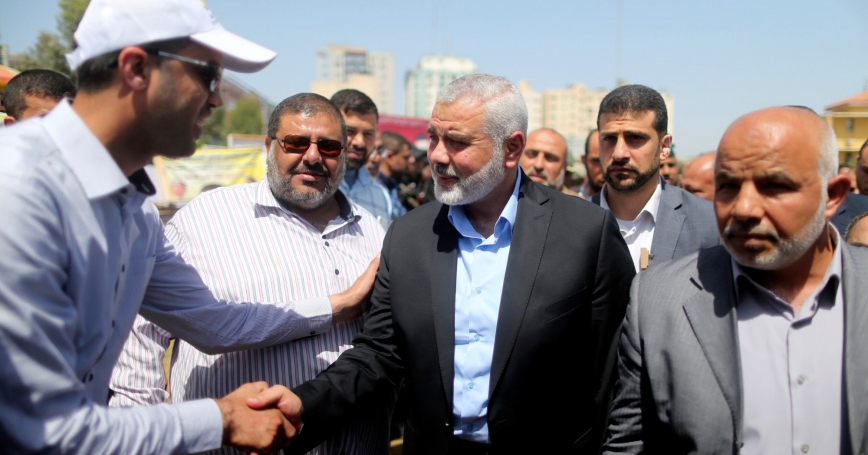 On May 1, 30 years after releasing its founding charter, Hamas unveiled a revised version of the document that appears to soften the group's stance toward Israel. The major takeaway is that Hamas is open, at least in principle, to accepting the 1967 borders of a Palestinian state—a major sticking point in previous failed negotiations between Israel and the Palestinians. Its previous position had always been to call for the destruction of the state of Israel.

The revised charter, which still contains some of the more incendiary language of the original, was announced the same week that U.S. President Donald Trump met with Mahmoud Abbas, the longtime leader of the Palestinian Authority, Hamas's main political rival. It also comes amid a continuing Egyptian blockade of Gaza. Since assuming power in 2014, Egyptian President Abdel Fattah el-Sisi's government has tightened security along the Gaza border, shut down many of Hamas's tunnels (including by flooding some with sewage), and harassed Gazan fishermen who have strayed into Egyptian waters. The loss of the tunnels is a serious logistic challenge for Hamas, especially considering the critical role they served as an underground avenue for smuggling fighters, weapons, and hundreds of millions of dollars' worth of goods into Israel.

But aside from the benefits of currying favor with Cairo or shifting media focus away from Abbas, a major component of Hamas's rebranding is strategic. Indeed, the changes to the charter raise a number of questions about Hamas's political future. Although hard-liners in the Israeli political elite may claim that nothing has changed, even minor tweaks in a terrorist organization's ideology and political platform can have lasting and outsize effects, providing the momentum necessary for further changes down the line. It may be imprudent to expect Hamas to engineer a radical departure from its worldview, but the recently announced shift could smooth the way toward progress with Israel.

Historically, Hamas has had links to the Muslim Brotherhood and has shared ideological roots with the insurgent Egyptian Islamic Group (Jamaat al-Islamiyya), active throughout the 1990s, and Egyptian Islamic Jihad, which once claimed the current al Qaeda leader, Ayman al-Zawahiri, as a member. Since its inception, Hamas has maintained a hard line toward Israel while representing the strand of Palestinian politics that rejects a two-state solution.

Hamas considers the conflict with Israel an existential struggle rather than a mere dispute over borders.

The group has focused on the importance of traditional Islamic values and has called for the elimination of Israel and the establishment of an Islamic state in Palestine. It considers the conflict with Israel an existential struggle rather than a mere dispute over borders. In the original charter of 1987, Hamas makes clear that its purpose is to elevate the concept of “jihad of the sword,” or offensive military actions, in its efforts to mobilize Palestinians. The language in the revised charter, importantly, does not renounce violence and still considers jihad a legitimate right of the Palestinian people.

But even before the charter's revisions, Hamas's tactics had proved flexible over time. Despite its occasional inflammatory rhetoric, its ideology—much like Hezbollah's—is pragmatic, and the group has demonstrated flexibility before. At various points, including in 2006, Hamas called for a temporary ban on suicide operations, perhaps in an attempt to increase its appeal among a broader swath of the Palestinian population. It has also worked across the Sunni-Shiite divide to cooperate and collaborate with Iran in what has become a more complicated relationship since the beginning of the civil war in Syria. In the same vein, the charter revisions suggest that Hamas is flirting with the idea of a more moderate position vis-à-vis Israel and a negotiated political settlement to the Israeli-Palestinian conflict. Dropping the language explicitly calling for Israel's destruction also suggests an effort by Hamas to portray itself as more of an Islamic national liberation movement and less of an offshoot of the transnational Muslim Brotherhood, which has been systematically targeted by the Egyptian government.

Still, even if Hamas is able to fully trade the bomb for the ballot box, it remains to be seen whether Israel will ever truly accept the group as a serious political entity. One obvious difficulty is the significant number of terror attacks and suicide bombings the group has carried out throughout the course of the insurgency.

A History of Violence

When Hamas first emerged in 1987, Israelis welcomed it as a counterbalance to Yasir Arafat's Palestine Liberation Organization, which promoted an ideology of aggressive Palestinian nationalism and was more worrisome to Tel Aviv at the time. (In fact, Israel initially viewed Hamas as “a temporary nuisance with no real capacity to present a threat, and with little popular legitimacy,” according to the Middle East scholar Beverley Milton-Edwards.)

However, Israel soon realized that Hamas was a highly capable adversary—and one whose forces were willing to die for their cause. Hamas's military wing, Izzadhin al-Qassam, began carrying out suicide attacks in 1993, which it believed would give the group a tactical and strategic advantage over the Israel Defense Forces (IDF). During what became known as the second intifada, from the fall of 2000 to early 2005, Hamas unleashed (PDF) a torrent of suicide bombings that resulted in the deaths of hundreds of Israelis while inflicting severe psychological trauma on the Israeli populace.

In response to these attacks, Israel launched several major offensives against Hamas over the past decade. These include Operation Cast Lead during the Gaza War of 2008–09, Operation Pillar of Defense in 2012, and the sustained bombing of Gaza in 2014 during Operation Protective Edge, which Israeli officials argued was aimed at disabling the Hamas network of tunnels and its ability to smuggle men and materiel to replenish its depleted ranks.

Historically, the group's use of suicide bombings does not seem to have caused its popularity to ebb—in a 2002 survey, nearly 70 percent of Palestinians said they believed suicide bombings were a legitimate tactic in the conflict with Israel. After each battle, Hamas emerged badly bruised, but not beaten, even while it stressed the asymmetric nature of the conflict and portrayed itself—correctly in the eyes of many—as the underdog in the fight against a ruthless occupying force.

The Future of the Conflict

Signs of a changing strategic calculus within the Hamas leadership were evident as early as 2006, when the group decided to enter the political arena and won a stunning victory in the Palestinian Legislative Council elections. The choice to sit for elections, always a critical decision point for an insurgent or terrorist group, was highly controversial among its membership. Organizing for elections cost money and, in the eyes of some militants, diverted precious resources from the overarching goal—attacking Israel. Many of the group's leaders, including Sheikh Ahmed Yassin and Abdel Aziz al-Rantisi, both assassinated by Israel, consistently remained skeptical of the efficacy of diplomacy and the peace process throughout their tenure within the organization.

With the language calling for Israel's destruction scrapped, one major concern is that there could now be an opening for more radical groups to gain strength in Gaza.

And with the language calling for Israel's destruction scrapped, one major concern is that there could now be an opening for more radical groups to gain strength in Gaza. Despite Israeli Prime Minister Benjamin Netanyahu's conflation of the two groups, Hamas has continuously disassociated itself ideologically from al Qaeda, releasing a statement in 2007 that accused Zawahiri (at that time deputy to al Qaeda leader Osama bin Laden) of undermining Palestinian (PDF) jihadists for more than a decade and a half and rebuked al Qaeda's targeting of innocent civilians, even as other ultraconservative Salafist groups continue to pledge fealty to al Qaeda or the even more radical Islamic State (also known as ISIS). The growth of these groups in the Palestinian territories should be a major cause of concern to Israeli officials.

Yet there are grounds for hope. As with all long-standing conflicts, change will likely come gradually and could be accompanied by setbacks and false starts. But as terrorist chieftains mature, they often come to terms with what violence can and cannot achieve. Within Hamas's leadership, rapprochement with Israel could be viewed by some as a far more productive prospect than a third intifada or another skirmish with the IDF.

But the question remains whether the modified charter represents a shift by Hamas away from violence and toward a more lasting and peaceful political presence or a ploy to buy time to rearm until the group grows strong enough to once again challenge Israel militarily. The answer will have a major impact on the future of the Israeli-Palestinian conflict and the broader Middle East.

Colin P. Clarke is a political scientist at the nonprofit RAND Corporation, an associate fellow at the International Centre for Counter Terrorism (ICCT)-The Hague, and the author of “Terrorism, Inc.: The Financing of Terrorism, Insurgency, and Irregular Warfare.”

This commentary originally appeared on Foreign Affairs on May 17, 2017. Commentary gives RAND researchers a platform to convey insights based on their professional expertise and often on their peer-reviewed research and analysis.