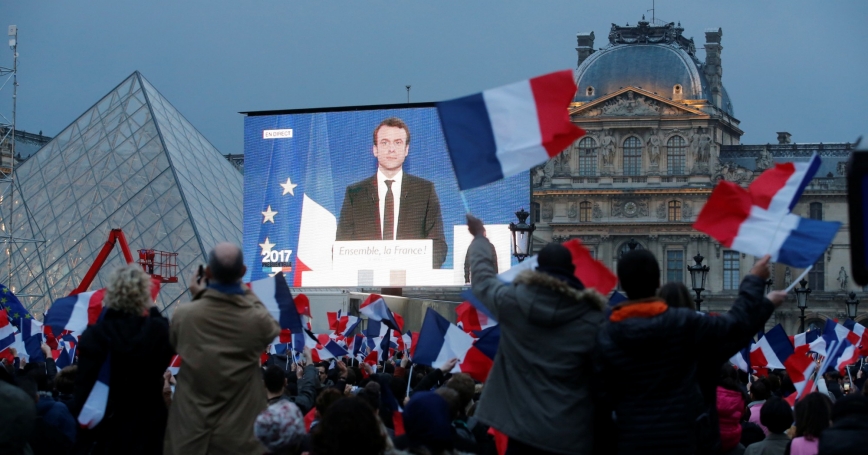 President-elect Emmanuel Macron is seen on a giant screen near the Louvre museum in Paris, France, May 7, 2017

Emmanuel Macron's victory in the French presidential elections has thwarted the revolution that his rival Marine Le Pen promised. Le Pen effectively sought an end to the European Union, a move that would likely have resulted in far-reaching economic turmoil. Meanwhile, her ties to the Kremlin could have greatly weakened NATO unity in the face of future Russian aggression. Domestically, her election could have created mass upheaval from those who opposed her.

The very fact that Le Pen did as well as she did is a sobering statement about the state of affairs in the country of the French Revolution.

But the very fact that Le Pen did as well as she did is a sobering statement about the state of affairs in the country of the French Revolution.

Macron now faces an immense challenge. France will need adroit political skill at the helm to mend the wounds the election has exposed in the French body politic and create a governing coalition from among France's now-weakened centrist parties.

In 1962, French President Charles de Gaulle famously quipped about how hard it was to govern a country "which has 246 types of cheese." The French populace is no less fractious today. In Sunday's election, for example, many supporters of the candidate of the left, Jean-Luc Mélenchon, refused to join Macron to help defeat Le Pen.

At their root, France's problems are economic.

The country has suffered for over a decade from the crumbling of the generous social and economic contract the French hammered out in the decades after World War II. Efforts at financial and structural reform have failed or been too limited to create jobs and overcome the unemployment generating discontent nationwide—in marginalized Muslim communities, the troubled suburbs of France's metropolitan centers and working-class neighborhoods fallen on hard times.

Macron will need to tackle these economic problems head-on. His experience with public and private finance may come in handy here. But ultimately his background is that of a technocrat rather than a politician, and these are political, not technical, problems.

Macron may have won a significant portion of the popular vote, but his legitimacy will be tested no sooner than the French parliamentary elections scheduled for next month.

Macron's election is evidence that support remains for liberal-democracy and the European Union. But the struggle over its future is far from over.

On the wider European stage, Macron's election is evidence that support remains for liberal-democracy and the European Union. But the struggle over its future is far from over.

Whereas Jacques Chirac defeated Le Pen's predecessor Jean-Marie Le Pen in 2002 by a margin of 64 percent, Macron won by only 32 percent. In the Dutch parliamentary elections in March, far-right politician Geert Wilders did not emerge at the head of the pack, as some had feared, but did make significant gains. Right-wing nationalism is strengthening in Central Europe, especially in Hungary, but also in other countries. Meanwhile, in Germany, the "Alternative for Germany" party is looking more and more like a right-wing nationalist party.

Europe still faces a massive migrant crisis that will require decades of European social and economic adjustment. Russia's pursuit of a multifaceted campaign of active measures and subterfuge designed to disenfranchise democratic sentiment across the continent shows no sign of relenting—and could well have been involved in the hack of Macron's campaign emails last week. Many European economies beyond France are not growing fast enough, and Britain's impending exit from the European Union may hurt the French economy and Europe's resource base.

The French Revolution was in many ways the birthplace of modern European democracy. After World War II, France was a pioneer of European integration and the theory and practice of social welfare. But, like many of its European neighbors, French history since 1789 is checkered with bouts of fascism and communism. Optimism about Europe's liberal-democratic foundations shouldn't be overdone. Vigilance must not wane.

Christopher S. Chivvis is associate director of the RAND International Security and Defense Policy Center and author of “The Monetary Conservative: Jacques Rueff and Twentieth Century Free Market Thought” and “The French War on Al Qa'ida in Africa.”

This commentary originally appeared on U.S. News & World Report on May 9, 2017. Commentary gives RAND researchers a platform to convey insights based on their professional expertise and often on their peer-reviewed research and analysis.