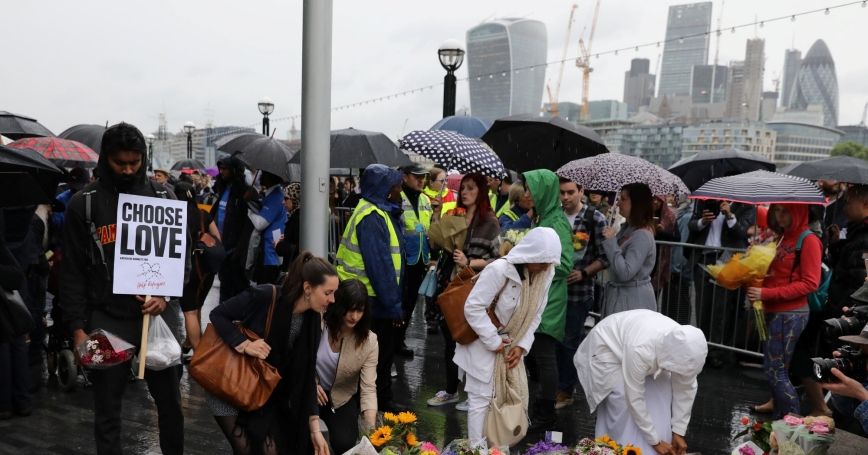 People lay flowers after a vigil to remember the victims of the attack on London Bridge and Borough Market, at Potters Field Park, London, June 5, 2017

Saturday's terrorist attack in London points to several recent trends and security challenges in a move toward what might be called “pure terror.”

Terrorist attacks involving vehicles are clearly on the rise, especially where explosives and firearms are not easily acquired. They require virtually no planning. Obtaining a vehicle is not difficult. City streets are filled with people. Both al Qaeda and ISIS have urged their followers to conduct ramming attacks.

But it is not a completely new tactic. It can and has happened here.

In 2006, a student at the University of North Carolina drove his SUV into a crowd of fellow students, injuring nine people but killing none. Vehicle ramming attacks also have occurred in Canada, Israel, China, France, Germany, Sweden, and the U.K. The worst of these was the July 2016 attack on Bastille Day celebrants in Nice, France, which killed 86 people, but that was an exceptional event.

A succession of attacks without central direction suggests that one attack is inspiring the next. One objective of terrorism is to encourage others to action. The Manchester bombing required planning and preparation. The Westminster Bridge and London Bridge attacks could have been far more spontaneous. The challenge for authorities is not whether they can dismantle a gang, but determining how many individuals are teetering on the edge of violence and how they can be dissuaded from going jihad.

There are no easy security measures to guard against vehicular attacks. Bollards can protect some areas. Heavy trucks can temporarily block the entrances to open air markets and other public events. But cities cannot be made completely safe.

Knives, machetes, and hatchets also feature heavily in recent attacks. Availability is part of the explanation, but jihadist ideology is also a blood cult that exalts beheading and throat slitting. Personal participation in bloodletting appeals to certain minds.

This is a move toward pure terrorism — completely random attacks.

Denied access to one target set merely sends the terrorists down the road to the next target.

Pure terrorism exploits the inherent advantage that terrorists have over those charged with security. Terrorists can attack anything, anywhere, any time. Authorities can't protect everything everywhere all the time. Erecting new security perimeters brings little net security benefit. Denied access to one target set merely sends the terrorists down the road to the next target. Random attacks make the point that no one is safe anywhere.

British Prime Theresa Minister May said that the recent terrorist attacks in the United Kingdom are not connected. That makes them different from the string of terrorist attacks and foiled plots that affected France and Belgium between 2014 and 2016. That was a campaign carried on by a network of French and Belgian fighters returning from Syria and assisted by an underground of local confederates.

What can be done? British authorities are ahead of the U.S. in efforts to counter violent extremism and channel vulnerable young men away from terrorist violence. But these programs can never identify and divert every would-be killer. ISIS has used social media to reach a broader audience. It is low-yield marketing, but its barbaric videos resonate with a small number of self-selectors, many of whom are already deeply troubled individuals. May's vow to go after the use of cyberspace to spread these ideas could help.

British authorities have also been effective in thwarting terrorist plots. May said that intelligence agencies and police have disrupted five credible plots since the Westminster attack in March. Like their counterparts in the U.S., they monitor the internet and use undercover operations to identify and apprehend those displaying intentions of carrying out a terrorist attack. U.S. authorities have interrupted more than 80 percent of the jihadist terrorist plots since 9/11. No one bats a thousand.

Some believe Britain's current wave of terror is a consequence of its immigration policies and acceptance of refugees. We do not yet know anything of the three attackers in this most recent case. The terrorists in the Westminster Bridge and Manchester attacks were both born in the U.K. Most of those involved in recent jihadist terrorist attacks in the U.K. were born there. More than half of the jihadist attackers in the U.S. are American-born citizens.

Prime Minister May also spoke of the need to defeat the ideology of extremism that motivates these attacks. That is a long-term task. Preventing all pure terrorism is probably impossible, but seeking ways to divert vulnerable people from the terror path is a worthy step in that direction.

Brian Michael Jenkins is a senior adviser to the president of the RAND Corporation, director of security research at the Mineta Transportation Institute and an author of numerous books, reports and articles on terrorism-related topics.

This commentary originally appeared on The Hill on June 5, 2017. Commentary gives RAND researchers a platform to convey insights based on their professional expertise and often on their peer-reviewed research and analysis.