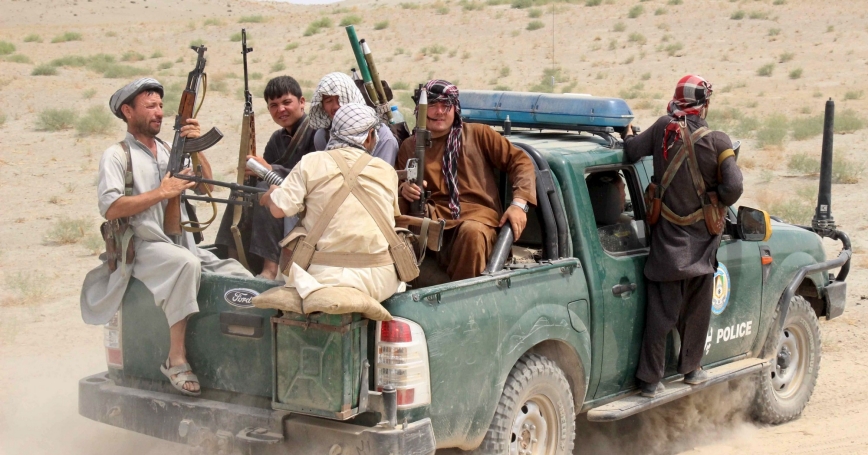 Trump's Options for Afghanistan: Losing or Not Losing

Afghan local police near a frontline during a battle with the Taliban at Qalay-i-zal district, in Kunduz province, Afghanistan August 1, 2015

The American war in Afghanistan is in its 16th year. It was preceded by 12 years of civil war, and before that by the Soviet Union's war. So the country itself has been in, more or less, continuous conflict since 1979.

At present, the Afghan armed forces are gradually ceding ground to the Taliban. The Afghan government still holds all the major population centers, but the Taliban is increasing its control over the countryside. This result was foreseen by the Obama administration when the president announced in May of 2014 that American troops would be out of the country by the end of his term. The expectation was that once American and European forces departed, the Kabul government's control over the country would gradually erode. Although Obama and his team never acknowledged it, they were looking for what Henry Kissinger described, apropos of Vietnam, as “a decent interval” between the American withdrawal and the local regime's collapse.

Only a couple of weeks after Obama announced this intended withdrawal, the Islamic State burst out of war-torn Syria and marched to the very gates of Baghdad. This development underscored the dangers of abandoning weak allied regimes to overthrow by violent extremist movements. The Iraq experience eventually caused Obama to think better of his Afghan withdrawal decision and instead leave 8,500 American troops in Afghanistan, thus handing the conflict and the decision whether to stay on to his successor.

Today, the Trump administration faces the choice of losing quickly by withdrawing from Afghanistan; losing slowly by staying at the current, clearly inadequate levels of commitment; or not losing by increasing that commitment enough to maintain a stalemate on the battlefield. This is the rationale for the few thousand additional American and European troops sought by the local American and NATO commander, General John Nicholson.

The Taliban, al Qaeda, and the Islamic State are ready to turn Afghanistan once again into a terrorism-exporting state.

Waiting in the wings are the Taliban, al Qaeda, and the Islamic State, ready to turn Afghanistan once again into a terrorism-exporting state.

Another oft-cited observation by Henry Kissinger is that “the guerrilla wins if he does not lose.” This certainly is what subsequently happened in Vietnam, where the United States lost patience and the war was turned over to the Saigon regime, which was overrun two years later, although by North Vietnamese regular troops, not by Viet Cong guerrillas.

Logically, however, Kissinger's dictum is the opposite of true. The insurgents' aim is to displace and replace the government. If this does not occur, the government eventually wins, and the guerrillas eventually lose.

Al Qaeda and the Islamic State are irreconcilable, but the Taliban has national rather than global aspirations. Denied victory long enough, its leadership may eventually be ready for a negotiated settlement. But they will not do so as long as winning seems an attainable option.

The U.S. administration is also continuing to consider its wider regional strategy. Pressure on Pakistan to cease sheltering and facilitating Taliban operations could be increased. Perhaps most importantly, this administration should avoid setting withdrawal deadlines, as Obama repeatedly did, as these only incentivize the Taliban to wait the United States out.

This commentary originally appeared on The Cipher Brief on June 23, 2017. Commentary gives RAND researchers a platform to convey insights based on their professional expertise and often on their peer-reviewed research and analysis.