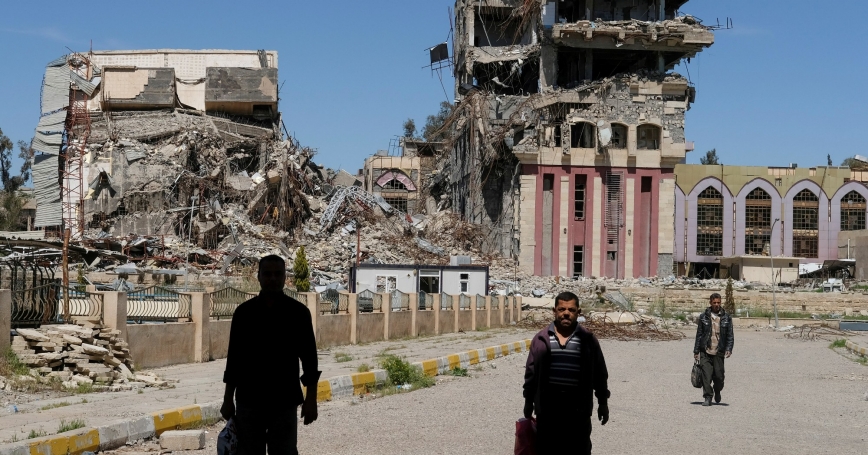 People walk in front of the remains of the University of Mosul, which was destroyed during a battle with Islamic State militants, in Mosul, Iraq, April 10, 2017

by Linda Robinson and Shelly Culbertson

The Islamic State group has been defeated in Mosul, Iraq's second-largest city. This week, Iraqi Prime Minister Haider al-Abadi declared military victory and raised Iraq's flag in celebration, after some of the most intensive urban fighting since World War II.

But the military routing of the group from Mosul is not enough to ensure lasting stability, either in Mosul itself or in Iraq more broadly.

While there is cause for celebration for the inspiring victory over the Islamic State group at the end of this dark chapter in Iraq's history, there is also a need for a measured awareness of the challenges that lie ahead—and a plan to address them.

What comes next will require careful planning, diplomacy, implementation, and coordination among the Iraqi government; U.S. military, diplomatic, and aid entities; other coalition governments; and U.N. agencies. Many of these steps rely primarily on increased diplomatic and aid leadership, along with targeted coordination of existing financial commitments.

There are a number of crucial steps that could be taken in the next year.

First are urgent actions to improve the humanitarian situation, including addressing acute water, power, and medical shortages and developing a strategy for helping remaining displaced Iraqis return home. All of Mosul's water, sanitation, and power capacity was damaged or destroyed, and Mosul has only a quarter of its pre-conflict hospital beds remaining. Some 3.3 million Iraqis remain displaced, including 800,000 from the battle for Mosul.

Actions will also be needed to provide for immediate security, particularly in demining; ensuring adequate hold forces in cleared areas; and doubling of police training. Widespread mines and booby-traps left by the Islamic State group are a fundamental obstacle to civilians returning home. While humanitarian and stabilization demining is underway, with funding by the U.S., U.N. and others, the scale of demining is vastly insufficient to address the problem. So that the Islamic State group does not move right back in to the liberated areas, Mosul's 1.2 million population could require a hold force of 60,000 troops (based in part on RAND's estimated ratio of needed troops to population). Yet there is a risk that hold forces may be drawn off for fighting against the group elsewhere, such as in Tel Afar and Hawija, leaving liberated areas exposed. Mosul's population also requires a police force of 25,000 to manage peace, prevent looting, and prevent reprisals—but only 13,000 police have been hired and trained to date. The situation is urgent.

Third are steps to support resumption of city life in Mosul, such as rebuilding critical infrastructure and housing, enabling employment, and resuming education. Infrastructure damage is extensive—housing, roads, public utility buildings, and Iraq's ancient heritage sites have all been damaged. Much of West Mosul has been reduced to rubble. All five of Mosul's bridges have been damaged or destroyed. An estimated 60 to 75 percent of manufacturing and industrial facilities—key to employment—have been destroyed.

The importance of employment is underscored by a survey (PDF) of internally displaced Iraqis; after security, the second reason why they return home or stay home is access to a job. Seven in 10 displaced children and a large number of children inside of Mosul have missed school, and a million children in Iraq studied the Islamic State group's indoctrinating K-12 curriculum.

At the local level, neighboring communities distrust each other because of their histories of victimization and trauma. Reconciliation cannot be just at the top; efforts among the people are important as well. And efforts such as those of the U.S. Institute of Peace to resolve disputes among communities in Tikrit have proven successful and could be scaled up.

In terms of governance, Iraq passed a 2013 law to devolve more responsibilities to its provinces, but implementation has been slow. Key to national reconciliation, decentralization is important to better meet the needs of communities and to politically draw the country back together again through greater local autonomy.

The needs are great, but there are notable accomplishments to build upon. Iraq is not hopeless.

While the needs are great, there are also notable accomplishments to build upon. Iraq is not hopeless. While the Islamic State group once held a third of Iraq's territory, it has been defeated in all but a few pockets of the country by Iraqi security forces, with coalition support. With U.N. support and coalition funding, Iraq has carried out humanitarian and stabilization programs, delivering aid in conflict zones and in displaced persons camps. Major conflict has been avoided among host communities. Host communities have demonstrated remarkable generosity toward the 5.3 million Iraqis who have been displaced internally since 2014 and 2 million displaced persons have returned home. And substantial Baghdad-Kurdistan regional cooperation has been achieved during the military operations.

Yet without additional steps, Iraq risks devolving into further warfare within a matter of months. People need stable homes and communities to return to, with confidence that a process is in place to clear mines, restart utilities, rebuild key buildings, offer critical public services like health care and education, and heal the wounds that divide communities.

This is a delicate phase of Iraq's history. Moving quickly could send a critical message to the Iraqis. American help after the military victory could help to ensure that the U.S. investment in the combat phase pays off.

This commentary originally appeared on U.S. News & World Report on July 14, 2017. Commentary gives RAND researchers a platform to convey insights based on their professional expertise and often on their peer-reviewed research and analysis.