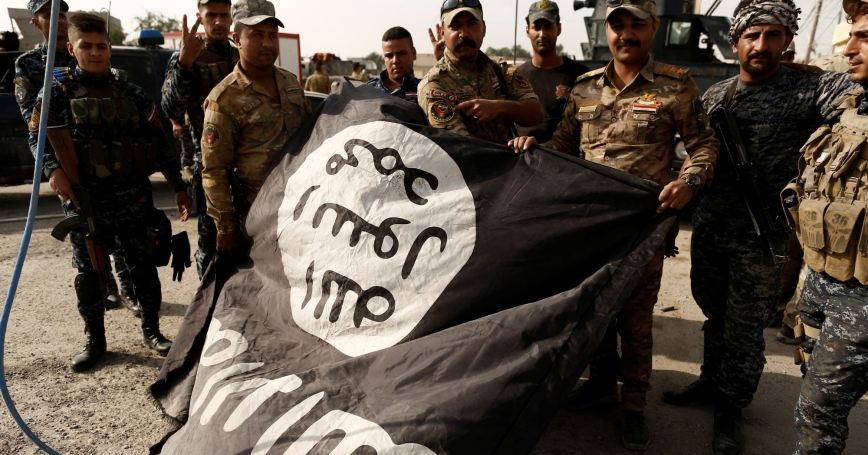 Iraqi soldiers pose with the Islamic State flag in al-Shura, Iraq, which they recaptured on October 30, 2016

The U.S. needs to base its Middle East strategy “on the way the region is, not the way we want it to be” and accept the realities of governance, not fight them, Michael Vickers, former undersecretary of defense for intelligence, said during a RAND Corporation conference on ISIS.

Vickers's keynote remarks highlighted a series of discussions on the evolving threat from global terrorism. Panelists generally agreed that while there has been success in protecting the U.S. homeland and carrying out offensive campaigns in dismantling extremist groups, many long-term challenges to the broader world order remain that will require U.S. strategic patience.

Opening the June 27 conference at RAND's Arlington, VA, office, Jack Riley, vice president of the RAND National Security Research Division, harkened to the continuing challenges of the “theater of terrorism”—a phrase coined in 1974 by Brian Michael Jenkins, senior advisor to the RAND president.

Vickers, interviewed by RAND senior vice president Andrew Hoehn, argued that the U.S. needs to win the wider proxy war across the region, not just the counterterrorism campaign, and treat the conflict not as a clash against a handful of entities or states, but as a “partnership working with 60 countries.”

In assessing U.S. counterterrorism efforts since the 9/11 attacks, he said: “The scorecard gives rounds to both the U.S. and terrorist groups.” While ISIS is on its heels, the risk remained that it could “still win the next round.”

Seth Jones, director of RAND's International Security and Defense Policy Center, said many countries across the globe are facing a challenge with returning foreign fighters even as ISIS continues to lose territory and becomes more decentralized. “ISIS will increasingly have a harder time sustaining attacks as their inspirational leadership and territory declines,” Jones said. “A key question they face will be: What will draw people to the cause?”

Jones spoke during a panel moderated by New York Times senior writer Eric Schmitt with Ali Soufan, chairman and CEO of the Soufan Group, and Daveed Gartenstein-Ross, senior fellow at the Foundation for Defense of Democracies. Soufan warned that ISIS is now mutating, much like Al Qa'iada did several times after 9/11: “Al-Qa'iada was the McDonald's franchise model—you set up a branch, but it's independently owned—whereas ISIS is like a decentralized Starbucks franchise—a newly established affiliate is a province of the group.”

Ryan Crocker, former U.S. ambassador to Afghanistan, Iraq, Pakistan, Syria, Kuwait and Lebanon and chair of the advisory board of the RAND Center for Middle East Public Policy, remarked on another panel that “the key to defeating extremism and stability in the region is good governance, but there's still a lot of fighting to come” before lasting peace is viable.

One solution Crocker strongly recommended against for Syria was any sort of partition. “The history of major partitions is not great,” he said. “Look at India and Pakistan: Using U.S. solutions in very different countries is not the path forward.”

“The prescription isn't called 'mowing the grass,' it's dealing with the root causes.”

That panel, moderated by RAND senior fellow Lynn Davis also featured senior RAND policy researcher Linda Robinson and William McCants, senior fellow at Brookings Institution. Scenarios in the region will “improve if the U.S. continues to engage with Iraq as the center of what it needs to do in the region, and it doesn't confront Iran head on,” Robinson said.

Ben Connable, senior political scientist at RAND, said that while progress has been made in dealing with ISIS and al Qa-iada, the lack of an enduring strategy has been a huge problem, and “the prescription isn't called 'mowing the grass,' it's dealing with the root causes.”

Peter Bergen, vice president at the New America Foundation, said the U.S. is resistant to making long-term commitments and tends to think in the short term, yet its defensive and offensive capabilities are well beyond where they were pre-9/11. “If the yardstick for measuring success over the past 16 years is no dead Americans at home, we're doing a decent job,” he said.