Another Casualty of Climate Change: Peace 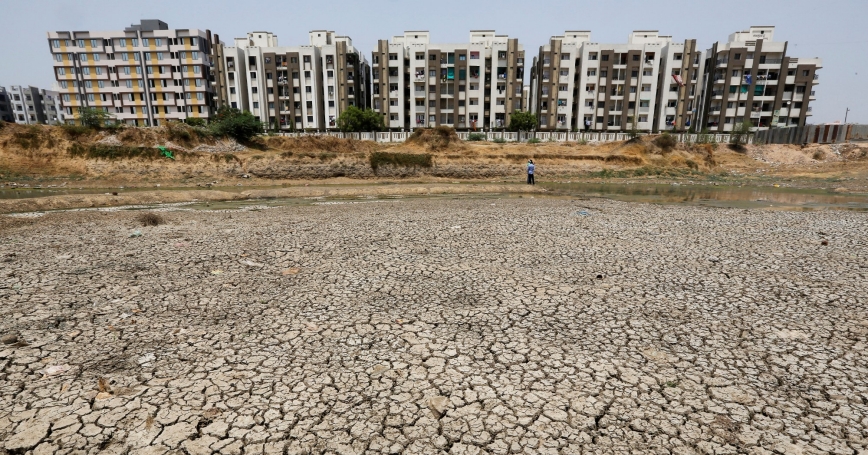 Residential apartments next to the dried-up Ratanpura lake on the outskirts of Ahmedabad, India May 9, 2016

For months, farmers in the Indian State of Tamil Nadu have been protesting, sometimes naked, sometimes carrying skulls, sometimes lighting candles in remembrance of six protesting farmers killed earlier by police—to gain the attention of authorities to their plight. Among the farmers' demands are forgiveness of loans they cannot repay as the worst drought in 140 years cripples their harvests. In one part of the state, a million coconut trees have died, driving the migration of many farmers to cities where they hope to work as day laborers. Elsewhere, under cover of night, farmers pump water from below the ground of a depleted reservoir. Meanwhile, the lakes that once supplied the 8 million inhabitants of the city of Chennai have gone dry, and the city's water supply has dropped by half.

Drought, temperature and tensions rise in tandem, with the implicit threat of violent conflict not far behind.

Drought, temperature and tensions rise in tandem, with the implicit threat of violent conflict not far behind. In East Africa, 26.5 million people are in need of food assistance as the result of recurrent droughts and failed harvests, conflict and growing insecurity.

Now a new report by the Center for Climate and Security calls on countries to prepare for global crisis sparked by climate change. It identifies 12 “epicenters” where climate change could ignite conflict that could engulf large populations and often cross national boundaries.

This connection between human conflict and climate change is no mere coincidence. In fact, researchers have quantified a precise relationship between rising temperatures and conflict around the world. As the report found, with each significant deviation upward in a country's normal temperature or rainfall, the frequency of interpersonal violence rises by 4 percent and intergroup conflict increases 14 percent. Rising rates of human conflict appear to be another alarming impact of climate change.

On an intuitive level, it seems to make sense—hasn't most everyone felt irritable when forced to be out in the heat? Psychological studies have shown that people subjected to uncomfortably hot temperatures in laboratory settings have increased levels of aggression. New research is finding that what is true for the individual also holds true for populations.

Conflicts have been a part of humankind's story since ancient times, and the connection between climate change and conflict needs to be understood in its complexity. There are immediate causes of conflicts—political, social and otherwise—but climate change can act as an enzyme, accelerating and exacerbating it. Or as the Pentagon might say, climate change can be a “threat multiplier.”

Data from sub-Saharan Africa show that temperature increases over the past 30 years match up with outbreaks of civil war. The UC Berkeley study reports that “civil wars were much more likely to happen in warmer-than-average years, with one degree Celsius warmer temperatures in a given year associated with a 50 percent higher likelihood of conflict in that year.” The authors predict that by 2030 the expected one degree Centigrade increase in global temperature would translate to a 55 percent increase in civil war in some African countries, and to about 390,000 additional battle deaths. Similar conflicts have been predicted elsewhere, including in the South China Sea, the Arctic and Central America.

Of course, no one wants this to happen. Avoiding such an outcome will likely take enormous commitment from the global community; strong support for the Paris Convention on Climate Change (weakened by the United States' withdrawal); and urgent action by countries, cities and industry to help populations adapt to a changing climate. The underlying pathways that connect climate change and conflict also need to be understood.

Resource shortages: Rainfall variation affects agricultural production, and increases in global temperatures are expected to lower crop yields, leading to increased hunger and declines in rural incomes. In the absence of other economic opportunities, conflicts are expected to intensify. For example, when global food prices increased dramatically in 2008 it led to political and economic instability (PDF) and social unrest in dozens of countries.

In largely agricultural societies like those in India and many African countries, farm productivity affects those individuals dependent upon agriculture for their livelihood—and consequently the entire economy. Indeed, India has a history of famine, starvation deaths still occur and thousands of farmers commit suicide each year. Agricultural distress is already an issue, and as in Tamil Nadu, could well take more heated forms.

Disasters: With increasing temperatures, heat waves are likely to increase in frequency, intensity, duration and cause more deaths. The climate impact of other natural disasters also has been modeled and observed, and ranges from flooding to super-typhoons. These impact human health, livelihoods, and stability as well as the broader economy and society. In the absence of effective risk-reduction and response strategies, these disasters would affect poor and vulnerable communities the hardest and could lead to cycles of poverty and violence.

Human migration: In 2015, there were 244 million international migrants. Taken together, they would make up the fifth-most populous country in the world. As living conditions become intolerable or economic options dry up, people move in search of opportunity. Climate change is already causing mass human migration. The International Organization for Migration fears that the scale of such movement will rise, with “unprecedented” impact on lives and livelihoods[1]. Parts of western Asia, for example, are likely to become inhospitable for humans from heat by the end of this century, with temperatures projected to exceed the human adaptability threshold. Temperatures exceeding 45 degrees Celsius will become the norm in most low-lying cities and could go as high as 60 C in Kuwait City, Al Ain and Doha during late summer months. Heavily populated cities like New Delhi could have up to 200 days a year of temperatures greater than 95 degrees Fahrenheit (35 C).

These alarming findings show the need for immediate action to stop temperature increases by mitigating greenhouse gas emissions and for governments to urgently adopt policies that will help populations adapt to climate change, ranging from improved management of soil resources from small farms to vast rangelands, and advance planning to maintain and conserve water resources. And while some may feel that the Paris accord could be a hindrance to economic growth, proponents assert that its push to mitigate greenhouse emissions makes it a critical component to addressing climate change and would have economic co-benefits. For example, in Chennai, experts point out that the regular de-silting of lakes and reservoirs, and efforts to capture excess water during periods of heavy rain and ensure recharging of groundwater have been lacking.

Climate change is a threat to civilization. With increasing temperatures, conflicts are likely to increase in the future. Earth has been here for 4.5 billion years, and humanity has inhabited it for just 0.005% of that time. The mighty dinosaurs once roamed the planet slow and unafraid, and all it took was one meteor to end their days. In their defense, they perhaps didn't see it coming.

Dr. Gulrez Shah Azhar is an Aspen New Voices fellow, an assistant policy researcher at the nonprofit, nonpartisan RAND Corporation and a Ph.D. candidate at the Pardee RAND Graduate School.

A version of this commentary originally appeared on www.project-syndicate.org.