Female Drivers Can Put Saudis on Road to Enhanced Growth 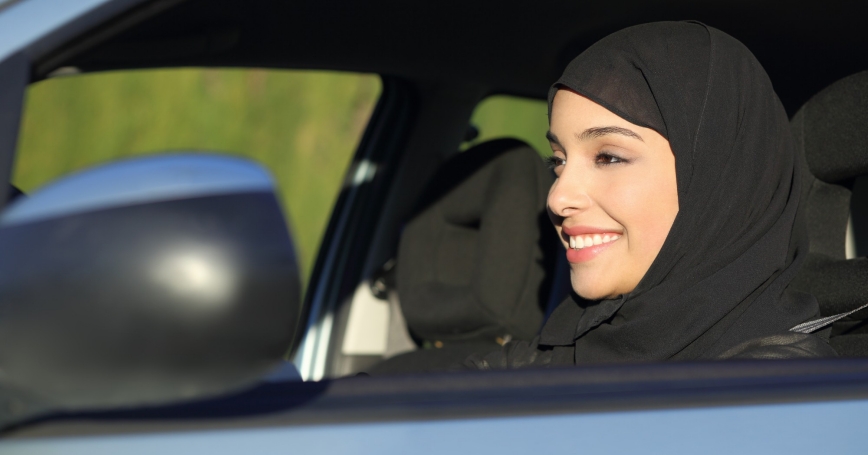 As of June, women in Saudi Arabia will have freedom of movement and a new level of independence simply because they will be allowed to drive.

Saudi Arabia, the last country in the world to prohibit women from driving, announced the impending change this week. Neighboring countries, such as Kuwait, Qatar, Bahrain and the United Arab Emirates, granted women the right to drive decades ago.

Allowing women to get behind the wheel will likely lead to significant long-term changes in Saudi Arabia's economy and the participation of women in the labor force.

More women should be able to drive to work, conceivably increasing the number of Saudi women who are employed. Women who aren't allowed to drive require a male to drive them, such as a “guardian” (typically a father, husband, brother or even a son) or a household servant.

When women are able to drive themselves, it will free up time for their male family members (who spend time driving women to school, work, shopping and elsewhere) to be more productive. One survey found that more than 87 percent of Saudi households employ a household driver, often a person brought to Saudi Arabia from an Asian country specifically for this purpose.

Many households may not need to employ family drivers once women can drive, freeing up family income for other purposes. But if fewer families need drivers, it could also mean fewer job opportunities for foreign drivers in Saudi Arabia, with some losing their jobs as of June and fewer being hired in the future.

Perhaps the biggest area of impact may be on what is called the “Middle East and North Africa paradox.” This confounding set of statistics shows that girls and women have higher educational attainment than boys and men in the Middle East, but this does not translate to the workplace.

As a group, Middle Eastern countries have the lowest female labor force participation rate in the world. In Saudi Arabia, girls score better (PDF) than boys in math on international tests, and 62 percent of Saudi university students are women.

Yet, Saudi Arabia ranks sixth from the bottom in terms of female labor force participation, with 21 percent of Saudi women working.

The right to drive removes one important obstacle to bringing more women into the workforce. But other countries in the Middle East allow women to drive and still have low female labor force participation rates.

While transportation rights are important, the number of women in the workplace will not change overnight.

So, while transportation rights are important, the number of women in the workplace will not change overnight. Other factors presenting challenges to women's employment in the Middle East include longstanding tradition, family responsibilities, generous state subsidies that enable families to live on one salary, weak private sectors and youth unemployment that verges on 20 percent for men and 56 percent for women in Saudi Arabia.

Women's roles and rights are evolving in the Middle East. Women now have the right to vote in every country in the Middle East that holds elections. But this is a recent development in Saudi Arabia. Saudi women voted in municipal elections for the first time in 2015.

Women across the region have been gaining additional legal rights within the family and economically, for example, with many countries removing requirements that women must obtain permission to travel from a male guardian and allowing women equal rights to divorce. Yet, Saudi Arabia still requires a woman to secure permission from a male guardian before she can travel.

I worked in the Middle East for the better part of a decade. Among my colleagues were many strong, smart, capable and determined Middle-Eastern women who drove themselves to work. They took their right to drive for granted and found the idea of not being allowed to drive unsettling.

Freedom of mobility for women in Saudi Arabia, a country of 28 million citizens, can't help but reshape the social and economic landscape. Young women in Saudi Arabia will now have opportunities their mothers and grandmothers never had, thanks to increased education, freedom of movement and changing expectations and social norms.

Shelly Culbertson is a senior policy researcher at the nonprofit, nonpartisan RAND Corporation; she is the author of The Fires of Spring: A Post-Arab Spring Journey Through the Turbulent New Middle East (2016).

This commentary originally appeared on The Hill on September 29, 2017. Commentary gives RAND researchers a platform to convey insights based on their professional expertise and often on their peer-reviewed research and analysis.