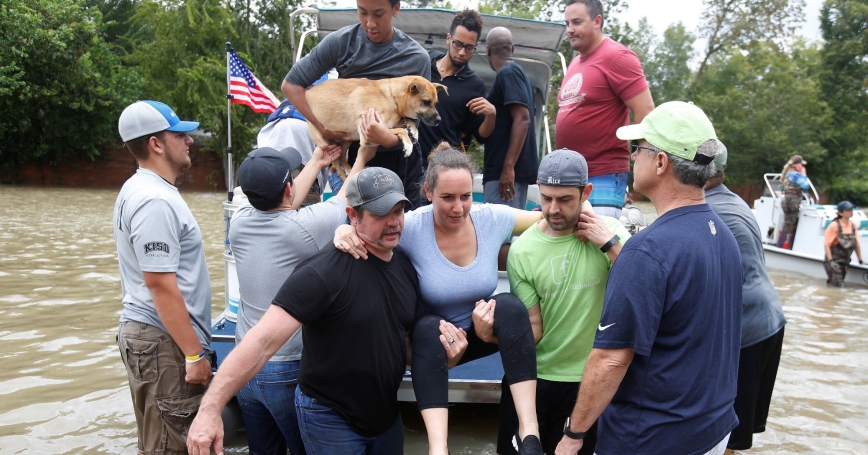 A rescue boat evacuates people from the rising waters of Buffalo Bayou following Hurricane Harvey in a neighborhood west of Houston, Texas, August 30, 2017

No two disasters are the same. Yet it is not unusual for officials to be confronted with a common critical public safety decision: whether to evacuate the public or advise them to shelter in place. This crucial decision, which is normally time sensitive, can set the tone for the remainder of the response and recovery phases.

Evacuation is controversial in emergency management circles, with many local government leaders and emergency managers deeming it impractical — if not impossible — in cities as large as Houston, Texas, or over large land masses such as the 22 states affected by Superstorm Sandy in 2012. Evacuation is also not without risk. People can be injured — or even die — during evacuations, as happened during the evacuation of Houston in advance of Hurricane Rita in 2005 (PDF).

However, a false dichotomy may exist where choices are seen as binary, either to evacuate completely or to shelter in place only. Other, more targeted choices — such as sheltering in safer locations within a city or targeting specific local evacuations — could be available if an analytic basis for making such judgments is fully developed and properly communicated to those in a hurricane's path.

Improving the quality of the information considered before storms hit could help authorities reach better conclusions on the big question of whether to order evacuations or not. This also could expose other potential options short of full-scale evacuations. Taking a close look at the current tools and metrics for assessing storm risk and communication with populations would be a worthy step.

The often-cited Saffir-Simpson scale, which relies primarily on wind speed to characterize these complex storms, has become obsolete. Despite its shortfalls, it remains the single most descriptive metric the National Weather Service, government officials, and media employ in communicating the potential impact of a hurricane. Although wind speed is an important input measure, it does not adequately describe the full range of potential effects of weather events. Size of the storm, anticipated storm surge, area of the country and its physical characteristics, size of the population likely to be affected, special situations, and likely duration are all necessary descriptors of a storm's potential.

Hurricane Katrina reinforced that size and storm surge were at least as important metrics for describing the hurricane. In Katrina, the Category 3 delineation based on wind speed alone failed to indicate the likelihood of a storm surge that would overtop the New Orleans, Louisiana, levees with catastrophic and deadly consequences.

Hurricane Harvey made clear that storm duration should be an important consideration in assessing a storm's potential impact.

While Hurricane Harvey's consequences are still unfolding and the full effects will not be understood for weeks or months, it made clear that storm duration should be an important consideration in assessing a storm's potential impact. Harvey's extended stay in the south Texas region, with its unprecedented amounts of rain, magnified the impact of the storm dramatically.

Assessment of special physical attributes and situations could also be an important component of future risk models. Katrina striking New Orleans, which lies below sea level and is only protected through a complex series of levees, dikes, surge protectors, and pumps, demonstrated that physical characteristics should be factored into the evacuation calculus. For Superstorm Sandy, the most severe effects were felt in the most densely populated part of the United States, where the heart of the nation's financial sector is located. And looking to Harvey, the large percentage of the nation's petrochemical capacity would clearly count as a special circumstance.

Communications must continue to be improved regarding evacuation decisions. Coded terms such as a “100-year storm” should be avoided. The language is imprecise and not understood, even by those who use such terminology. In fact, it is possible, but not necessarily likely, to have multiple 100-year storms in a single person's lifetime.

The decision to evacuate cannot be made lightly, as public reaction can be swift and severe when officials call for mandatory evacuation and “get it wrong.” Several key factors must guide the evacuation decision:

In answering these questions, authorities could improve their chances of making appropriate decisions by seeking the broadest range of data available, and not relying exclusively on yesterday's tools like the Saffir-Simpson scale and imprecise terminology like “100-year storm.” Taking lessons from storms like Harvey, Sandy, and Katrina could also help.

Leading up to Hurricane Irma striking southwest Florida, 13 Florida counties had ordered voluntary or mandatory evacuations in advance of the powerful Category 5 storm. Still, over six million people live in Florida's three most populous counties (Miami-Dade, Broward, and Palm Beach), indicating the immense challenge associated with a full evacuation. The large-scale event coupled with people that either could not or choose not to evacuate mean a large population likely rode out the storm. The actual degree to which these warnings were followed and what this means for those who did not evacuate will unfold over the coming days and weeks.

The 2017 hurricane season is approximately halfway completed, yet the National Oceanographic and Atmospheric Administration is calling for the remainder of the season to remain “active.” As such, it is likely other government officials will be confronted with the evacuation question soon. Their decisions, as those of their predecessors, could have life-altering consequences, which means these decisions should be based on the best information possible.

Andrew Lauland is a senior researcher at RAND Corporation. He was the state homeland security advisor for the state of Maryland from 2007 to 2015, and homeland security director for the City of Baltimore from 2002 to 2007. In 2006, Lauland and 150 Baltimore City firefighters, police officers, and public works personnel deployed to Gretna and St. Bernard Parish in Louisiana in response to Hurricane Katrina.

This commentary originally appeared on Domestic Preparedness Journal on September 11, 2017. Commentary gives RAND researchers a platform to convey insights based on their professional expertise and often on their peer-reviewed research and analysis.