Savings from a Single-Payer Health System Would Not Be Automatic 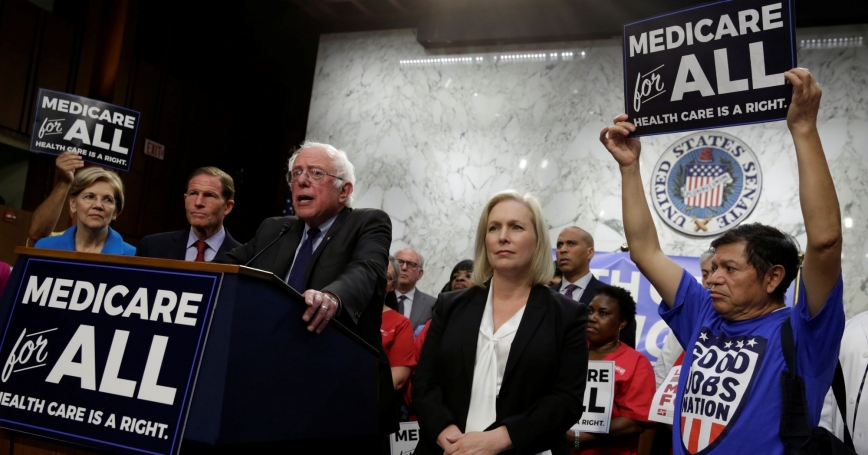 Senator Bernie Sanders (I-VT) speaks during an event to introduce the "Medicare for All Act of 2017" on Capitol Hill in Washington, September 13, 2017

Discussion of single-payer health care systems increased somewhat last week with the introduction by Sen. Bernie Sanders (I-Vt.) of his Medicare-for-all legislation. Polls have shown increasing public support for single payer. Yet there is no agreement on how to set up and pay for a single-payer system in the U.S. or how much that system would cost. Advocates assert that a single-payer system would cost less than the status quo, but the savings are not automatic, and how much it would save is far from clear.

The spending required for a single-payer system depends on the price of care and the services used. When health care is free, people tend to use more health care services, some of which is beneficial and some is not. Under Sanders's Medicare-for-all plan, the use of health care services would almost certainly increase.

First, everyone would be covered, compared with the 28 million uninsured under current law. Second, Sanders's plan would cover nearly 100 percent of health care costs, meaning that people would not be charged deductibles or copayments except for some prescription drugs. While the Sanders plan involves nearly no cost sharing, nothing about a single payer precludes having some level of cost sharing or other cost control strategies.

Single-payer advocates argue that prices will decrease by more than enough to offset the increased use of services. Several studies, primarily by authors affiliated with the Physicians for a National Health Program, have compared administrative costs between the U.S. and other countries and between public and private health insurance within the U.S.

Although administrative costs could be reduced by a considerable amount in a national single-payer program, reaching levels achieved in other countries or even in some existing U.S. public programs — serving segments of the population and often involving private contractors — may be aspirational and is not guaranteed.

Who would administer a single-payer plan that covers every U.S. resident?

But who would administer a single-payer plan that covers every U.S. resident? Even Medicare now involves private insurers that administer Part C (Medicare Advantage), Part D (prescription drug coverage), and supplemental plans (e.g., Medigap and employer-sponsored plans). It's difficult to imagine a scenario in which private companies are not involved at least as third-party contractors.

In addition, some administrative costs such as for tax collection and fraud detection could increase with an insurance program that covers the entire U.S. population. Health care provider administrative costs may decrease to some extent, as billing procedures could be simplified and streamlined with a single payer.

Any provider administrative savings may mean that providers would receive lower total reimbursement (payment for health care services along with associated administrative expenses), in which case providers may need to restructure their administrative and billing functions in order to maintain their bottom lines.

Reductions to provider reimbursement are possible but depend on negotiated levels and payment models. Prices could be set by the government as the single payer, but would likely involve negotiations with provider and industry groups. Given the American Medical Association's historical opposition to single-payer efforts and the influence of the health insurance and pharmaceutical lobbying groups, it remains to be seen if the government could successfully negotiate lower rates.

What happens if the administrative savings and reimbursement reductions are not enough to offset the increased use of health care services?

What happens if the administrative savings and reimbursement reductions are not enough to offset the increased use of health care services? The government could establish a cap on overall spending, but enforcement could be an issue if costs are overrun. The benefits covered by the plan could be reduced, or cost sharing could be increased.

Or taxes could be increased to fund the program. But large tax increases could be a deal breaker: Vermont's single-payer effort failed in 2014 with the governor's office citing high expected tax increases for individuals and businesses, and the recent legislation in California stalled largely due to the lack of a financing plan.

To curb the potential of dramatic tax increases, a single-payer plan should include explicit approaches to address increased spending due to greater use of health care by more people.

In short, it's a mistake to assume that a single-payer health care system will automatically come with cost savings. It might be easy to support the concept of single-payer, but serious consideration should be given to addressing how to pay for the plan and control costs.

Jodi Liu is an associate policy researcher at the nonprofit, nonpartisan RAND Corporation.

This commentary originally appeared on The Hill on September 26, 2017. Commentary gives RAND researchers a platform to convey insights based on their professional expertise and often on their peer-reviewed research and analysis.