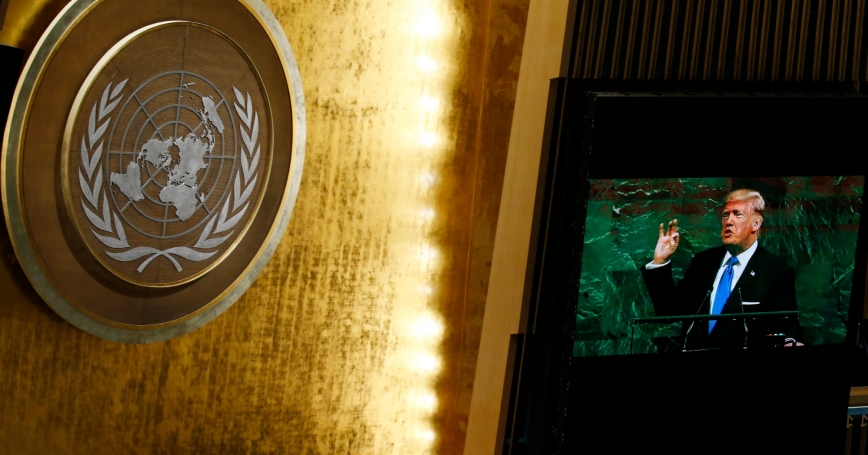 In his first appearance at the United Nations last week, President Donald Trump adopted a mixed tone toward the institution. He pledged to think of the American people first, and suggested that the U.N. suffers from too much waste and mismanagement. But the speech also contained some powerful endorsements of the value of multilateral cooperation: “Making a better life for our people,” he said, “also requires us to work together in close harmony and unity, to create a more safe and peaceful future for all people.” He promised that the United States would work with the body to make it more influential than ever.

If the speech is any guide, the administration will press for better burden-sharing and administrative reforms at the U.N. But it could also make good on its promise to underwrite multilateral cooperation when it is effective—because the U.N., like the broader, post-war multilateral order of which it is the centerpiece, represents a great competitive advantage for the United States.

International institutions, rules, and norms have mostly worked in the U.S. interest, not against it.

Too often during recent political debates, skeptics have suggested that U.S. interests and support for the international community are somehow mutually exclusive—globalism as a threat to American aims. In fact, international institutions, rules, and norms have mostly worked in the U.S. interest, not against it, and the administration has an opportunity to build on that record with a strong agenda of reform but also support.

It's worth remembering, first of all, that the thick network of post-war institutions did not originate in some plot by a crowd of global Lilliputians to tie down the American Gulliver. Forums from the U.N. to the General Agreement on Tariffs and Trade (or GATT, later the World Trade Organization) to NATO to the Nonproliferation Treaty were largely American creations, designed to avoid a replay of the twin disasters of the 1930s—economic chaos and unconstrained aggression. According to many metrics, the post-war order has since 1945 correlated with notable success on this score: Unprecedented global economic growth (at least until recently), impressive degrees of trade integration, minimal large-scale inter-state conflict, and a surge of democracy and attention to human rights.

The post-war order isn't entirely responsible for these outcomes, but that's not the metric that should be used. Neither is U.S. military predominance, or the deterrent effect of nuclear weapons, or domestic economic liberalization in key countries—some of the other crucial factors that helped produce the post-war outcomes so beneficial to U.S. interests. These factors gain their greatest strength from a positive-sum dynamic when many helpful variables are pulling together.

The question, therefore, isn't whether international organizations like the U.N. can take over world politics and substitute for American leadership and power. It is whether they provide an important, and in some cases essential, piece of the puzzle that bolsters U.S. influence and makes America more secure. Experience suggests that the answer is clearly yes.

Take an example from the news: North Korea's nuclear ambitions. There is no global police force to strong-arm the North, but the architects of the post-war order never held it to that standard. The better questions might be: Is U.S. diplomacy fortified by having a U.N. Security Council to vote sanctions into place and rally world opinion? Are U.S. demands more potent because they reflect the norms of the Nonproliferation Treaty? When progress is made, is the U.S. better off having an International Atomic Energy Agency that accumulates decades of experience and provides a neutral verification effort? Are deterrent efforts stronger for the existence of U.S. alliances in the region?

America's global preeminence owes much to the fact that it has often worked in the name of a global consensus.

The history of U.S. diplomacy toward the North, testimony of U.S. and international officials who have worked the issue, and other sources of evidence all suggest that the elements of a shared order do benefit U.S. strategy in these ways. This fact in turn reflects a larger theme: America's global preeminence owes much to the fact that it has often worked in the name of a global consensus. As we are seeing, that power isn't enough to force the North to knuckle under. But U.S. diplomacy and deterrent threats would be less effective, and the risks of clashes with other states much higher, if the United States was simply freelancing in the absence of any agreed international norms or forums for global consensus-building.

A coherent international order has more than coercive power, though, and achieves much of its effect through an attractive gravitational force. The 40-some states that represent the core group of the order, mostly value-sharing democracies, represent over 70 percent of global gross domestic product and define the standards of global status and recognition. They use multilateral institutions like the International Monetary Fund, World Bank and NATO to enforce conditions that states must meet to get access to trade, capital and technology. North Korea isn't tempted by this offer because it knows global engagement would destroy its regime. But in several other defining cases of nonproliferation—South Africa, Ukraine and Libya—the promise of deeper engagement with this community played a critical role in these countries' decisions to surrender their nuclear programs or weapons.

The same pattern—of multilateral cooperation and institutions bolstering U.S. goals—crops up on a dozen issues. The WTO provides a framework to lever fair trade concessions out of China. The IMF; the Group of 20 industrial and emerging market nations, or G-20; related financial forums; and the cooperative habits they foster, were vitally important in harmonizing responses that eased the impact of the 2008 financial crisis.

Far from being a patsy tied down by the strings of a hundred skeptics and adversaries, the United States has enjoyed disproportionate influence by grounding its own self-defined interests in a supportive multilateral order. Such an approach makes America stronger, not weaker. We need a strategy that serves American interests—and does so in part by investing in and working through a strong multilateral order.

Michael J. Mazarr is a senior political scientist at the RAND Corporation, where he directs the project on Building a Sustainable International Order.

This commentary originally appeared on U.S. News & World Report on September 22, 2017. Commentary gives RAND researchers a platform to convey insights based on their professional expertise and often on their peer-reviewed research and analysis.