China's Field of Dreams in Pakistan 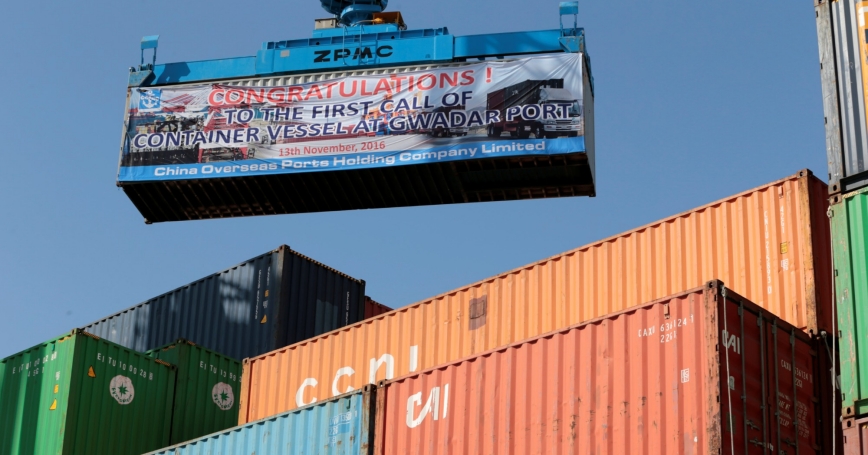 A container is loaded onto a Chinese container ship after the inauguration of the China Pakistan Economic Corridor port in Gwadar, Pakistan November 13, 2016

President Trump's recent speech on Afghanistan called out Pakistan for harboring terrorists targeting U.S. and Afghan forces across the border, and hinted that billions of dollars in U.S. military and counterterrorism aid are at stake. U.S. aid to Pakistan has averaged $1–2 billion annually since 2002, spent mainly on reimbursing the military for support in the tribal areas along the Afghan border, securing Pakistan's nuclear arsenal, drug interdiction and disaster relief. A lively debate rages in Pakistan about whether such a small amount of targeted aid is worth accepting.

By contrast, China is four years into joint planning and construction of the China-Pakistan Economic Corridor, or CPEC, a $62 billion, 15-year joint infrastructure and economic development package of nearly 60 road, rail, port, power generation, communications and industrial zone projects that stretch 1,500 miles from Kashgar in southwest China to the Pakistani port of Gwadar on the Arabian Sea.

As many as 15,000 Chinese engineers, planners and laborers will have been deployed laying fiberoptic cable from the Chinese border south to Rawalpindi; paving a new Karachi-Lahore highway; upgrading track and roadbed on the 1,200-mile ML-1 Karachi-Peshawar rail line; building a new Gwadar airport; and adding 16,000 megawatts of coal, hydro, solar and wind power from 13 new plants. CPEC is scheduled for completion in 2030, with major projects operational by 2023. Progress has been steady but slow, with 19 projects, valued at $18.5 billion, completed or underway.

Both countries will gain. China will get sea access for its landlocked, economically depressed western provinces; a shorter, secure route for its Gulf fuel imports; and fueling and staging capability for Chinese naval vessels. Both countries will obtain expanded access to each other's markets. Pakistan gets a nationwide infrastructure modernization that will add an estimated 700,000 jobs and 2.5 percentage points to GDP and that is widely seen as a lifeline after two decades of economic stagnation.

Beneath the surface, China is testing a new “build it and they will come” model for delivering economic development and foreign aid. CPEC offers a mix of concessionary loans, grants and public-private projects combining infrastructure, industrial zone development and integrated logistics. It emphasizes pragmatic mutual benefit, without conditions on governance, political reforms, labor and human rights or other Western soft power concerns, although security guarantees for China's military are often found in the small print.

CPEC's success will provide an early benchmark for China's much larger and more ambitious Belt and Road Initiative, which commits $1 trillion in energy and infrastructure investment over 2013–23 toward creation of a vast Eurasian trade area spanning 68 countries from China, via South and Central Asia, the Middle East and Africa, to Europe.

The risks for China lie in the implementation of projects and in local politics across weak frontier economies plagued by poor transportation and communications, conflicting trade and technical standards, corruption and terrorism. Pakistan shares many of these problems, but is also a functioning democracy with a relatively educated bureaucracy and professional workforce.

Challenges slowing CPEC implementation so far have been daunting:

Security is a major concern. Balochistan separatists have killed more than 50 laborers on CPEC-related projects since 2014 in roadside bombings and drive-by shootings. Jihadist attacks this year on a civilian hospital and a police academy in Quetta, and the killing of two Chinese teachers, led to formation of a 14,000-member special Pakistan Army security division to protect CPEC projects, Chinese nationals and Pakistani workers.

Project finance is a balancing act for Chinese banks already struggling with massive debt loads and non-performing loans back home. With the highest-quality projects mostly financed, lending has slowed despite pressure from Beijing to finance more dubious projects in riskier locations. China's efforts to get banks in Hong Kong and other regions where it has influence to invest have so far been unsuccessful. Meanwhile, Pakistani lenders and investors complain they are frozen out of CPEC project opportunities.

Mistrust of China is likely to grow as 2018 Pakistani elections approach, if CPEC cannot produce quicker, more widespread results. Local businesses and workers bristle at preferences for Chinese labor and materials and at a top-down management approach that often disregards local concerns. The 700,000 jobs created over more than a decade is relatively small in a country of 193 million. CPEC-related imports of Chinese equipment and materials have eaten into Pakistan's foreign exchange reserves and put downward pressure on the currency. Many fear that a flood of government-directed, debt-financed lending could outstrip Pakistan's ability to repay over time, leaving critical land and infrastructure assets in Chinese hands.

Despite these obstacles it would be a mistake to assume that CPEC is stalled, let alone doomed to failure, as skeptics suggest. In fact, progress to date suggests that CPEC may well succeed and that political support in Pakistan will remain strong.

Prominent stakeholders in the region have been slow to react, and initial reactions appear to be more competitive than cooperative: The Indo-Pacific Freedom Corridor proposed by India and Japan has similar infrastructure development intentions to BRI, focused on Southeast Asia. The U.S. has revived a 2011 New Silk Road package of energy and infrastructure projects integrating South and Central Asia, this time in partnership with India and focusing on Afghanistan assistance, while President Trump's recent speech suggests a continued security-based approach in Pakistan.

History is unclear on the net benefits when great powers confer favors on poor countries to achieve political or security objectives. Generally speaking, economic initiatives have more often led to successful outcomes. A lot can still go wrong for China in Pakistan and across Eurasia. But CPEC projects already up and running send a clear message to all Asia-Pacific powers eager to participate in a regional market projected to comprise more than 80 percent of global growth in 21st century: If you're not a serious player, you can't win.

This commentary originally appeared on U.S. News & World Report on October 12, 2017. Commentary gives RAND researchers a platform to convey insights based on their professional expertise and often on their peer-reviewed research and analysis.