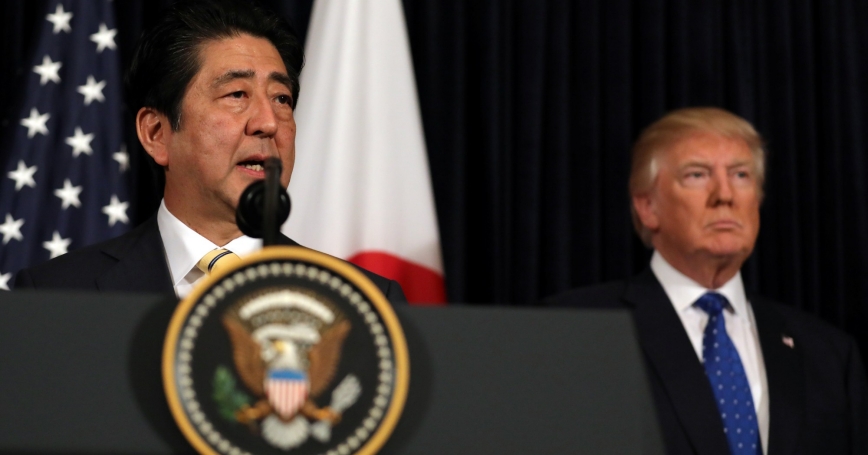 In late September, Japanese Prime Minister Shinzo Abe dissolved the country's national legislature, the Diet, and called a snap election, which is to be held tomorrow, Sunday.

With ongoing tensions with North Korea and U.S. domestic politics at the forefront of America's interests, Abe's moves have received scant media coverage in the United States. Yet, what happens in Japan's election carries enormous consequence for the United States and its interests in the Asia-Pacific region.

The rationale for calling the election is quite simple. Although Abe declared it is to secure a mandate for his spending plans and tough line against Pyongyang, it is difficult to see anything beyond an attempt to exploit a weak and divided opposition.

Prior to dissolving the Diet, Abe's Liberal Democratic Party (LDP) and its coalition partner Komeito, found themselves aberrations in a political scene dominated by opposition parties in decline and disarray. Then, in a rapid series of events, the opposition parties coalesced around charismatic Tokyo governor Yuriko Koike and her newly formed Party of Hope.

With the conservative-populist Koike seeking to outflank Abe from his right, there momentarily appeared—however slight—a real chance the LDP could lose seats should conservative and undecided voters flock to Koike.

In the weeks since, polls conducted by Japanese newspapers across the political spectrum show that Abe's LDP is still more popular than Koike's Party of Hope, thereby minimizing any real risk to Abe. While there was fleeting concern that Abe's calculated risk could backfire should voters see the snap election as a grab for power, the election will likely cement his position as prime minister.

This series of events, however, revealed a truth. For the first time since Abe came to power in 2012, there was a chance that Japan may lose its most able premier in decades. Even worse, when the Party of Hope's fortunes appeared to be on the upswing, but Koike promising she would not seek national office, it was unclear who might become the next prime minister should Abe lose.

A politically strong and secure Shinzo Abe has a large impact on the United States.

This exposed a critical point: A politically strong and secure Shinzo Abe has a large impact on the United States and its interests in the Asia-Pacific region.

The United States has gotten used to having a strong partner in Abe to cooperate with in tackling the region's security challenges, including threats emanating from North Korea and China, as well as piracy, WMD proliferation, terrorism, and natural disasters.

Importantly, Abe is a strong supporter of U.S. strategic objectives and consistently utilizes Japan's significant economic and diplomatic clout toward these same ends. Importantly, Japan's Self-Defense Force, or SDF, is an advanced force and enjoys significant interoperability with U.S. forces.

While it is true that the U.S.-Japan alliance generally enjoys bipartisan support, Abe has strengthened ties in unprecedented ways. He has positioned Japan to play a more proactive security role through the establishment of new legal and policy frameworks.

Abe has strengthened Japan's ties with the United States in unprecedented ways.

In only five years, he drafted Japan's first national security strategy; relaxed weapons export laws; reversed a decade-long trend of shrinking defense budgets; aggressively promoted international law in the maritime domain; invested in a diversified set of security partnerships with key regional states such as Australia, India, Vietnam, and the Philippines; and expanded the roles and functions of the SDF within the context of the U.S.-Japan alliance.

Most politically controversial was his decision to reinterpret Japan's constitution to allow the SDF to exercise limited forms of collective self-defense. And while some of these changes remain controversial in Japan and raise questions with Japan's immediate neighbors as to whether a more assertive Japan is emerging, these changes were possible because Abe was politically strong enough to challenge conventional wisdom and policies that many considered untouchable.

This positions Japan as an important check on China's great-power ambitions and raises the expectations that Japanese forces will play a pivotal role in any regional contingency. Abe has also strongly supported a plan to relocate a U.S. Marine base within Okinawa that has at times languished due to the lack of strong support by his predecessors.

This brings us back to why Abe's political strength matters. The region's security challenges are not going away. Countering them requires leadership that wants to—and can—play a proactive role alongside the United States. Only Japan can currently provide this.

The longevity that Abe has enjoyed enables him to craft a strategy and implement policies to carry it out. He has been able to focus on the long-term challenges facing the region, not just his own short-term political survival. The result is a stronger and more capable Japan and a U.S.-Japan alliance that has expanded its shared strategic objectives.

It is common to hear about the importance of the United States to other countries, like Japan, while it is almost unheard of to hear how important Japan is to the United States. When considering how to respond to the range of security challenges in the region, it is crucial to recognize that U.S. Asia policy begins and ends with this critical alliance.

The U.S.-Japan alliance is the only regional vehicle the United States has to pursue a multifaceted and cooperative approach while retaining crucial kinetic requirements to deter and, if necessary, defeat any regional challenger.

With a weakened Abe, or an inexperienced successor, it is possible that the United States could find itself in a weaker position to meet today's security challenges. This is why Japan's election promises to have an impact on America's regional leadership and security.

Jeffrey Hornung is a political scientist at the nonprofit, nonpartisan RAND Corporation. He specializes in Japanese security and foreign policies, East Asian security issues, maritime security, and U.S. foreign and defense policies in the Asia-Pacific region, including its security alliances.

This commentary originally appeared on Newsweek on October 21, 2017. Commentary gives RAND researchers a platform to convey insights based on their professional expertise and often on their peer-reviewed research and analysis.