Punting on the Iran Nuclear Deal 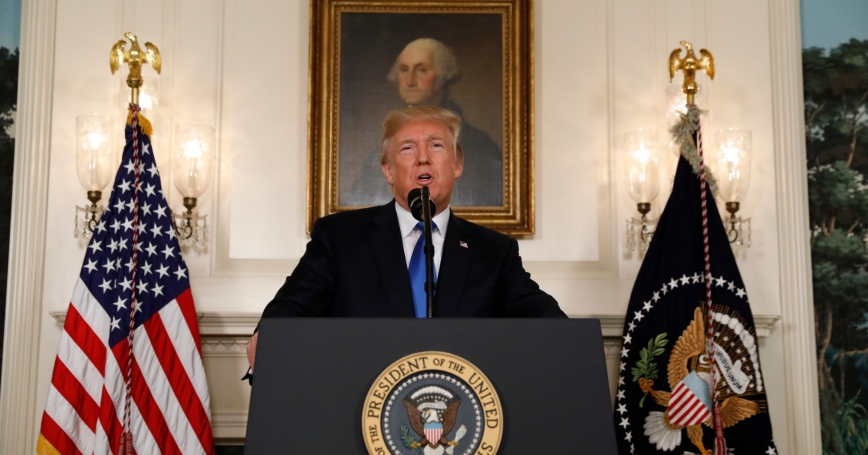 U.S. President Donald Trump speaks about the Iran nuclear deal in the Diplomatic Room of the White House in Washington, U.S., October 13, 2017

New presidents with limited experience in the national security realm tend to make unforced errors that sometimes end up costing the nation dearly. Think of President John F. Kennedy's decision to launch the émigré-manned, CIA-organized invasion of Cuba that ended ignominiously in the Bay of Pigs; Lyndon Johnson's decision to vastly ramp up American involvement in Vietnam's civil war, dispatching hundreds of thousands of American combat troops to supplement the small advisory presence already in the country; Ronald Reagan's decision to intervene in Lebanon's civil war, which ended in the bombing of the Marine barracks in Beirut and their subsequent withdrawal; Bill Clinton's similar mishandling of the Somalia intervention that resulted in the Black Hawk Down incident; and most consequential of all, George W. Bush's decision to invade Iraq on the basis of flawed intelligence. These decisions are almost universally seen as costly neophyte mistakes, sometimes even by the presidents who made them.

We are in the ninth month of the administration of the least-experienced American president in modern American history. So far, there have been no beginner's stumbles in the national security realm comparable to those marring many of his predecessors' early tenures.

This may be about to change. President Donald Trump has signaled that he is likely to decline the congressionally mandated requirement to certify that Iran is adhering to its commitments under the Joint Comprehensive Plan of Action to dismantle its nuclear weapons program. He reportedly intends to do this despite having twice certified Iran's compliance—and against the advice of all his chief national security advisers, including the secretaries of state and defense and members of the intelligence community, all of whom insist that Iran is still abiding by the agreement.

The alternatives to the nuclear agreement are clear. Either Iran will develop nuclear weapons, or the United States will go to war to prevent this, or both. Arkansas Republican Sen. Tom Cotton, an advocate of so-called decertification, is clear on what he thinks such a war would look like. “Let there be no doubt about this point," Cotton has said. "If forced to take action, the United States has the ability to totally destroy Iran's nuclear infrastructure. And if they chose to rebuild it, we could destroy it again, until they get the picture.”

In other words, the war would require a multi-year campaign, similar to the one the United States and its European allies mounted over Iraq from 1991 through 2003, involving continuous overflights and intermittent bombing for more than a decade. And even then the U.S. was not confident that it had succeeded in destroying Iraq's nuclear weapons program. But in the Iran case the United States would have no European allies, would not be backed by a United Nations mandate to conduct the military campaign, might not have access to some of the necessary bases, and would be opposed by a much more capable enemy that unlike Iraq is capable of procuring the most modern anti-air defense systems from abroad.

Trump is reportedly counting on Congress to save him from such an outcome. He apparently hopes to decertify Iran, yet have Congress pull back from re-imposing the sanctions lifted as part of the nuclear accord. This may be an effort to satisfy a campaign promise while avoiding unpopular and costly consequences, such as launching an open-ended war with Iran.

In modern times, Americans have looked to the presidency—representing the country as a whole—to counterbalance the more parochial tendencies of Congress, whose members are elected by much narrower constituencies. We now seem to be in a situation in which we must count on Congress to counteract a chief executive's unwise and short-sighted policies. As a result, the American system of checks and balances may soon experience an unaccustomed test with momentous consequences.

This commentary originally appeared on U.S. News & World Report on October 12, 2017. Commentary gives RAND researchers a platform to convey insights based on their professional expertise and often on their peer-reviewed research and analysis.