What Does the 19th Party Congress Mean for the PLA? 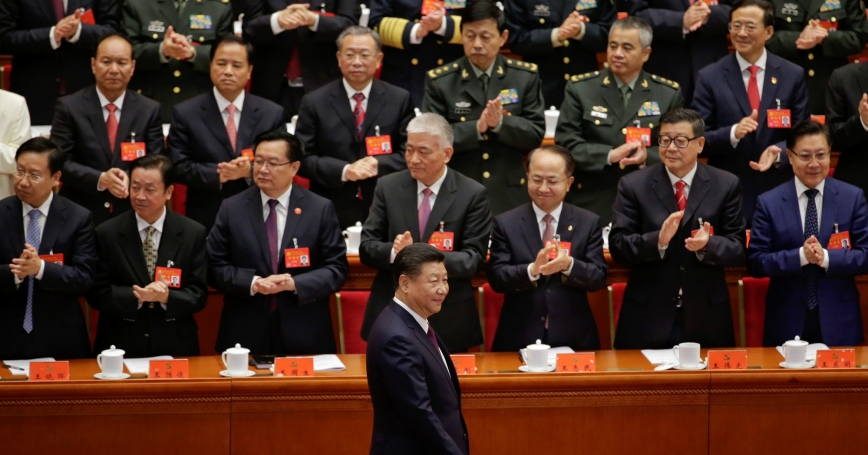 Chinese President Xi Jinping arrives for the opening of the 19th National Congress of the Communist Party of China in Beijing, China, October 18, 2017

As the armed wing of the Chinese Communist Party (CCP), the People's Liberation Army (PLA) has a lot at stake in the 19th Party Congress. In addition to changes in military leadership, the reports issued at a Party Congress invariably contain directives to the military, which can add impetus to ongoing initiatives.

As an example, in 2004, President Hu Jintao directed the military to develop as an integrated joint force. Immediately the PLA began trial efforts in the Shenyang and Beijing Military Regions to train personnel capable of fighting in such a manner. After the 17th Party Congress endorsed this shift in military strategy in 2007, the PLA extended these efforts to the entire military in 2009. The timing allowed military leaders to claim that the expanded effort reflected compliance with the directions from the 17th Party Congress. Regardless of whether this was in fact true, this example illustrates that the timing of when and how much the leadership increases resource commitments to major initiatives follows a political logic that is important for upholding the appearance of a CCP in supreme control.

The 19th Party Congress is likely to provide directions on three issue areas of high importance to the military. Reflecting the political logic outlined above, the military is likely to oversee an extension or acceleration of associated policies and initiatives following the Congress. The 19th Congress will call for: First, improvements in the professional quality of personnel; second, top down reforms to streamline and revamp organisations; and third, expanded efforts for security abroad, especially in matters related to the Belt and Road Initiative. Each of these areas reflect important, broader political-economic efforts to boost prospects for sustained economic growth and better governance, but they also carry significant implications for the military.

Improvement in the Professional Quality of Personnel

This party recognises that its ambition to lead a technologically advanced economy and ensure competent governance requires sufficient numbers of professional elites with a high degree of technical expertise and professional knowledge. Similarly, an increasingly technologically sophisticated PLA needs motivated, skilled professionals to carry out a broader range of missions, including outside China. Party and military leaders have tried for years to recruit and promote such individuals, but obstacles have persisted in the form of uneven policy implementation and resistance by cadres who stand to lose from change.

The Party Congress will probably endorse the promotion of younger officers who better understand the goals of the military's modernisation efforts.

To accelerate reform, the Party Congress will probably endorse the removal of unwanted personnel and enactment of policies to attract, retain, and cultivate desired professionals. For the former, the Congress will likely endorse Xi Jinping's anti-corruption drive and removal of recalcitrant officials. In the PLA, this will mean the removal of unwanted senior officers and the promotion of younger officers who better understand the goals of the military's modernisation efforts. For the latter, the Congress will likely direct efforts to strengthen and enforce institutions, rules and regulations that encourage and reward the development of skilled professionals. These mutually dependent imperatives will require progress on both fronts to succeed, and the purges undertaken in the PLA — however brutal and unfortunate they may be to the victims — will probably help the military establish and enforce institutions, rules, and regulations needed to build a more professional, joint military.

The 19th Congress will likely call for stepped up efforts to carry out a broad array of “top down” set of structural reforms outlined in the 3rd Plenum to improve governance and improve the nation's economic performance. The PLA also faces daunting structural changes.

Since 2016, it has begun to overhaul its command structure as part of a broader transformation into a joint force. Among developments, it has abandoned the military region system patterned after the Soviet Army and instead adopted a “joint theatre” system featuring greater integration of all the military's services. Associated reforms have barely begun, and the appointment of more leaders supportive of such changes should give Xi Jinping more leverage to force through these structural changes.

Since taking office, Xi Jinping has highlighted major geo-strategic initiatives, the most important of which is the Belt and Road Initiative (BRI). China has already pledged hundreds of billions of RMB for the initiative. However, the large overseas investments open major vulnerabilities. China's military will likely play an important role in safeguarding overseas interests, building on a growing presence abroad in recent years. Since 2009, the PLA has maintained a continual presence to combat maritime piracy off the horn of Africa. In 2017, China formally opened its first overseas military base, located in Djibouti. And China recently confirmed an expansion of its contribution of troops to United Nations peacekeeping forces to 8,000 personnel. In coming years, the PLA Marines could expand its presence abroad to protect embassies and China could conclude agreements for additional military supply ports in other locations.

The 19th Party Congress will occur just as the PLA is undergoing some of the most dramatic organisational and personnel changes it has experienced in decades. The disruptions of the anti-corruption drive and the dismantling of a decades-old command system has coincided with an ambitious modernisation program aimed at propelling the PLA into the upper tiers of world militaries. The 19th Party Congress should provide firm confirmation of the central leadership's endorsement of these changes and their intention to appoint military leaders capable of carrying them out. China's leadership will have its hands full steering the country's economy, politics, and security through what is expected to be a difficult period for the country.

However, if China's leaders can successfully overcome the formidable hurdles to economic and governance reform, the PLA should emerge from the Congress well positioned to meet its modernisation goals by 2020.

Timothy R. Heath is a senior international and defence researcher at the RAND Corporation.

This commentary originally appeared on China Policy Institute Blog on October 18, 2017. Commentary gives RAND researchers a platform to convey insights based on their professional expertise and often on their peer-reviewed research and analysis.